Drynaria, commonly known as basket ferns, is a genus of ferns in the family Polypodiaceae. It contains around 16 species and one natural hybrid.

Basket ferns are epiphytic or epipetric and are native to tropical Africa, South Asia, East Asia, Southeast Asia, Australia, and Oceania. Some species are economically important as medicinal plants. 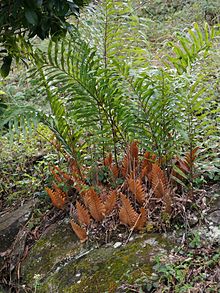 Drynaria rigidula growing on rocks in Australia. The fertile foliage fronds are large and dark green, the smaller brown sterile nest fronds are clustered at their bases.

Sori on the abaxial surface of the foliage frond of Drynaria quercifolia.

Basket ferns are characterized by the presence of two types of fronds, fertile foliage fronds and sterile nest fronds. The dark green foliage fronds are large, 2–4 feet (0.61–1.2 m) long, with elongated stalks. They are deeply lobed or pinnate, winged, and bear sori (structures producing and containing spores) on the bottom surfaces.[3]

The nest fronds are smaller rounded leaves basal to the foliage fronds. They do not bear sori and are persistent, not being shed after turning brown and dying.[3] They form a characteristic 'basket' that collect litter and organic debris, hence the common name.[4] The collected debris decompose into humus, providing the plants with nutrients it would otherwise not have received from being suspended above the ground.[5][6]

Both frond types grow from rhizomes typically anchored to a tree or a rock.[7][8] The rhizomes of Drynaria are creeping and densely covered in brown scales.[3]

Basket ferns are epiphytic (growing on trees) or epipetric (growing on rocks). They can also sometimes be found in man-made structures like brick walls.[9] They are found in wet tropical environments, usually in rainforests.[4] Their native range extends from equatorial Africa to tropical South and East Asia, Southeast Asia, Australia, and Oceania.[10] 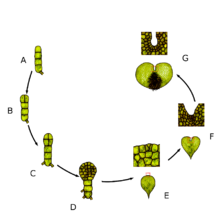 Like other spore-bearing plants, Drynaria exhibits metagenesis or the alternation of generations. One generation being the diploid multicellular sporophyte (the phase where the plant is most familiar), and the other being the haploid multicellular gametophyte (the phase where the plant is known as a prothallus). Gametophytes develop from spores released by mature sporophytes; while sporophytes, in turn, develop from the fusion of gametes produced by mature prothalli.[9][11]

Drynaria lends its name to a certain type of prothallial germination, the 'chlorophyllous cells with one or more rhizoids at the base cell. The tipmost cell divides repeatedly by cross-walls, forming a broad spatulate (spoon-shaped) prothallial plate. One of the cells at the top margin of the prothallus then divides obliquely when it has 5, 10, or more cells across its width. This results in an obconical meristematic cell. Division by this type of cell is parallel to each other and perpendicular to the rest of the cells, forming rows. This eventually results in the formation of a notch at the anterior edge of the prothallus, giving it a roughly heart-shaped appearance (cordate).[12]

The cordate prothallus are usually smaller with thinner midribs than that of other members of Polypodiaceae. They are also usually more sparsely haired, with some prothalli rarely having multicellular hair. They mature after six to nine months, and finish their life cycle at around a year. The gametophytes produce male (antheridium), and female (archegonium) gametes. The gametes fuse, forming the diploid sporophyte, the 'fern' part of the life cycle.[9][11][12]

Drynaria also naturally exhibits apospory, the production of a gametophyte not from spores, but directly from the vegetative cells of the sporophytes. Their leaves can develop prothalli under dim light and sporophytic buds in strong light.[13] 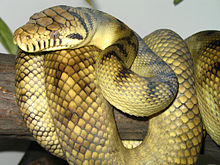 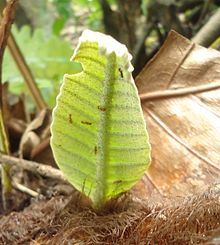 Ants feeding on nectar secreted by the lower surface of a young Drynaria quercifolia frond.

Drynaria, like some other genera of ferns (including Polybotrya and Polypodium), possess specialized nectar-secreting structures (nectaries) on the bases of the frond lobes or the underside of the fronds. The produced nectar is rich in sugars and amino acids.[14]

Their function may be to attract ants (or other organisms) for protection or for spore dispersal. They may also be simply excretory organs (hydathodes), used for exuding surplus metabolic products.[14] The ant species Iridomyrmex cordatus is commonly associated with D. quercifolia, in addition to other epiphytic plants.[15]

In Australia, Drynaria rigidula serve as shelter for amethystine pythons (Morelia amethistina) and scrub pythons (Morelia kinghorni).[16] As much as 81% of sightings of the snakes in one study were in large individuals of D. rigidula located about 17–40 m (56–130 ft) above the ground. Snakes seek shelter in D. rigidula more frequently during the colder seasons.[17]

In the 19th century, Indigenous Australians were documented by the Norwegian explorer Carl Sofus Lumholtz to have hunted pythons regularly during the winter months by climbing up to individuals of D. rigidula.[18]

The large rhizome mass of Drynaria can also serve as growing substrates for other plants like the ribbon fern (Ophioglossum pendulum).[19] Due to their ability to preserve moisture and persistence even after death, the nest leaves of Drynaria are also fertile hosts to a large number of water-borne fungi.[20]

The following is the list of accepted species classified under the genus.[22] Species marked with † are extinct.

Native to India, Southeast Asia, and China. One of the smallest species of Drynaria, it can be distinguished by rounded nest fronds. The foliage fronds are pinnatesect with few widely separated lobes. The sori are arranged in two irregular rows between the secondary veins.[23]

Extinct species from the Piacenzian age of China. See section below.

Native to Tibet, China, Bhutan, and Myanmar. Nest fronds pinnatilobed with wavy margins. Foliage fronds are deeply pinnatifid, with 7 to 9 pinnae. Sori are large in comparison to the size of the lobes and arranged in two rows on both sides of the main rib and in between the secondary veins. Closely related to D. sinica.[24]

Native to the Philippines. Similar to D. bonii but has smaller nest fronds, less than 2.5 cm (0.98 in) wide, with slightly scalloped margins. The foliage fronds are wavy.[23] 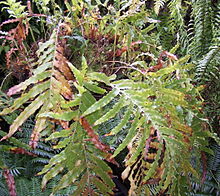 Drynaria laurentii in the Old Botanical Garden of Göttingen University.

Commonly known as ibandibandi.[27] It is native to equatorial Africa, from Cameroon to the Democratic Republic of the Congo.[28]

Native to Tibet, Nepal, Bhutan, and northern India. Characterized by deeply lobed pinnatifid nest fronds. Foliage fronds are deeply pinnatifid. The sori are small and arranged in one row along the primary vein.[3]

Native to Nepal, Bhutan, India, Southeast Asia, and China. A medium-sized species, it can be distinguished by deeply pinnatifid on both the foliage and nest fronds, with lobes that taper to a sharp point. The sori are arranged in two rows on each side of the primary rib of each lobe and in between the secondary veins.[23][3]

Drynaria quercifolia from the Philippines.

Commonly known as the oak-leaf fern, pakpak lawin, gurar, koi hin, ashvakatri, or uphatkarul.[30] It is native to India, Southeast Asia, Malaysia, Indonesia, the Philippines, New Guinea, and Australia. It is a large species with deeply pinnatifid foliage fronds. The nest fronds resemble the leaves of oaks, hence the common name. The sori are either scattered or arranged in two regular rows in between the secondary veins.[23]

Commonly known simply as the basket fern. It is native to Southeast Asia, China, Malaysia, Indonesia, the Philippines, Australia, New Guinea, and the southeastern Pacific Islands. Easily recognizable by being the only species in the genus with 1-pinnate foliage fronds. The lobes are narrow, taper to a sharp point, and are narrowly-winged at their attachment to the rachis. Sori are arranged in two rows along the primary vein of each lobe. Includes the cultivar Drynaria rigidula 'Whitei'.[23]

Commonly known as Gu-Sui-Bu. It is native to East Asia. Sterile nest fronds are rounded shallowly-lobed reddish-brown fronds overlapping each other. The fertile fronds are larger and deeply lobed. They bear 1 to 3 sori arranged on both sides of the central rib.[31][8][32] Formerly known as Drynaria fortunei.[33]

Commonly known as simbar layangan. Native to Southeast Asia, Malaysia, Indonesia, New Guinea, and Australia. A large species, it is similar to D. quercifolia but has smaller and stiffer foliage fronds. The sori are also smaller and arranged irregularly.[23]

A natural hybrid of D. sparsisora and D. rigidula[39] Found in Queensland, Australia.[40]

Extracts from the rhizomes of some Drynaria species are used extensively in traditional medicine.[41][42] In China, Taiwan, Vietnam, Thailand, and Laos, the rhizomes of Gu-Sui-Bu Drynaria roosii (more frequently cited by Asian authors by its synonym Drynaria fortunei),[33] are commonly used to treat bone injuries.[9][43] Its common name literally means "mender of shattered bones" in Chinese.[44] Another species, the oak-leaf fern (Drynaria quercifolia) is used similarly in South Asia and Maritime Southeast Asia.[11][45]

Numerous ethnopharmacological studies have been conducted into the properties of Drynaria.[11][9] In agreement with their use in traditional medicine, several studies have shown that basket ferns (D. roosii in particular) are effective in preventing resorption of bone cells and osteoporosis,[43][46] increases bone density, and have therapeutic effects on bone healing.[47][48][49] They have also been shown to possess a wide range of antimicrobial activity.[43][50][51]

Species of Drynaria commonly used in traditional medicine like D. roosii and D. quercifolia are in danger of being overexploited. None of the species are currently cultivated for the alternative medicine industry.[11][9]

Drynaria are also considered endangered in some areas (like in New South Wales, Australia), due to threats of habitat loss and low population numbers.[11][52]

In 2010, twelve well-preserved fossil specimens of Drynaria were described from the Sanying Formation of the Yangjie coal mine of China. Named Drynaria callispora, it comes from the Piacenzian age of the Pliocene epoch (about 3.6 to 2.5 million years ago).[53]

The fossil record of Drynaria and drynarioids is not very well documented due to the typically poor preservation of fossils recovered. Previous fossil species assigned to Drynaria include Drynaria astrostigma, D. dura, and D. tumulosa from the Cenomanian of the Czech Republic; and D. durum, all assigned tentatively to the genus in 1899. The arrangement and type of their sori, however, indicate that they are members of the family Matoniaceae instead.[53]

Outside the genus, Protodrynaria takhtajani from the Eocene-Oligocene boundary of Kursk Oblast, Russia shows some affinities to Drynaria but only distantly. The only other reasonably convincing fossil remains of drynarioids aside from D. callispora was a specimen named Polypodium quercifolia recovered in 1985 from the Late Miocene (23.03 to 5.332 million years ago) of Palembang, Indonesia. These were later transferred to the living species Aglaomorpha heraclea. It remains, as of 2011, the oldest known drynarioid.[53][38]

Below is a reconstruction of the evolution of species of Drynaria and closely related genera Aglaomorpha and Selliguea based on combined morphological and molecular phylogenetic data (Janssen & Schneider, 2005). Drynaria is likely to be paraphyletic, in contrast to Aglaomorpha, another genus which possess specialized humus-collecting structures.[54]