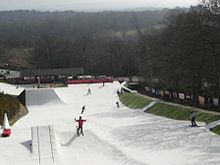 A dry ski slope or artificial ski slope is a ski slope that mimics the attributes of snow using materials that are stable at room temperature, to enable people to ski where natural slopes are inconvenient or unavailable.

Although commonly known as "dry ski slopes", many slopes are lubricated using a mist or jet system to increase speed and prevent damage to equipment from friction heat build-up. As a general rule, they are found predominantly in the United Kingdom and the Netherlands[citation needed] as other European countries tend to have ready access to real snow fields, as does North America in the winter.

A variety of materials can be found on dry ski slopes.

Early efforts to mimic snow involved laying extruded plastic tiles with upward spikes in an attempt to provide grip. These were unpopular as they provided little grip and turning capability and the experience was similar to skiing across ice.

However, in present day, many ski slopes (both indoor and outdoor) continue to use plastic, injection moulded tiles. Quality has improved and many artificial ski slopes in Holland use these tiles for training and championships. 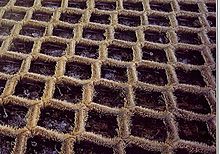 The next stage in dry ski slope development came with the brush industry. The most common material is dendix, a by-product of brush manufacturing which is similar to a short-haired brush with the bristles sticking upwards. Dendix is manufactured in Chepstow, however it can be found on slopes throughout the world.[1] It is arranged in a hexagonal pattern of approximately 1 inch (25 mm) strips of bristles in a 4 in (100 mm) hexagon. Although it was a significant advancement from previous surfaces, concern over damage to slope users (it provides little or no impact protection to a slope user when falling) and ski or snowboard damage due to friction meant litigation for slopes using it was a constant threat. Nowadays water is often sprayed onto the surface of the dendix to lubricate it and increase speed; however, higher insurance premiums cause many slope operators to look for safer alternatives.[2]

Despite more recent materials, Dendix remains the only artificial ski surface on which it is practical to run ski slalom races. 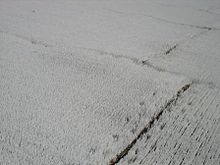 The most recent development has seen a crop of materials providing both impact protection and slope lubrication as well as the ability to perform turns, erect jumps, rails and quarterpipes and provide a ride that is closer to the feel of real snow. The most common of these is Snowflex, manufactured near Huddersfield, West Yorkshire in England by Briton Engineering Developments Limited. Others include Perma-snow by John Nike Leisure/ Techmat 2000, also in the UK and Astroride by NorCal Extreme Sports in the United States. Snowflex and Perma-snow are both white in colour, although the former has been produced in a darker green (such as in Kendal Ski Club in Cumbria, England) to comply with planning requirements.[3][4] There is no indication from NorCal Extreme Sports that AstroRide has not yet been commercially tested to any great extent.[5] Another available surface is Neveplast, a newer material whose use is becoming more common, especially for temporary installations. This new type of mat, which uses a concentric arrangement of conical stems, is marketed for downhill, snowboarding and cross country skiing. Neveplast claims to have a lower coefeccient of friction between the surface and the ski,[6] meaning that water use is significantly decreased. The Neveplast cooling hole has a comparable diameter to the F.I.S. slalom pole standards used for training and competition in both slalom and giant slalom.

Ski and board preparation

Artificial slope users often improve the performance of their equipment by using the hardest grade of Ski wax. Although, the wax wears off quickly and must be renewed after one or two sessions. At least one company makes a hard wax that is intended for use on dry slopes.[7] Some users apply aerosol furniture polish to the bases of their skis or boards as the silicon oil it contains is reputed to reduce friction. Other substances, such as Dishwashing liquid, are sometimes used[8]