The original Drury Lane Water Tower Place opened in 1976, but was closed in 1983 and became a movie theater.[1] Drury Lane Theatre group founder Anthony DeSantis spent $9 million to transform another movie theater located on 175 East Chestnut Street just off Michigan Avenue into a showplace for live performances in Chicago.[2] At the time of his death in 2007, the DeSantis family remained owners of the theater.[3] The new Drury Lane Water Tower Place, opened May 18, 2004 with similar décor and mainstream musical and comedy line-ups of its sister theater in Oakbrook. This next era for the 549-seat Drury Lane Water Tower began with performances of The Full Monty.[1] This was followed by Broadway In Chicago productions of The 25th Annual Putnam County Spelling Bee, Shout! and Xanadu.[4] 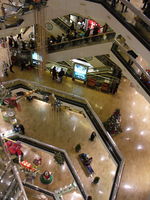 The rebranded Broadway Playhouse is set to open next to the Water Tower shopping center in September 2010.

The rebranded theater is officially scheduled to open on September 24, 2010 with a short series of concert performances by Sutton Foster, followed by a production of Traces, a French Canadian urban acrobatics show. The first marquee production at the Broadway Playhouse will be a new production of the 1978 Studs Terkel musical Working, featuring additional material written by Lin Manuel Miranda, the writer behind In the Heights. David Stone, the producer of Wicked and Next to Normal, as well as Mark Platt are also to be involved with the show scheduled for the spring of 2011.[5]