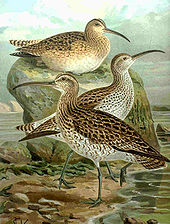 The Druridge Bay curlew was a curlew which was present in Druridge Bay, Northumberland in May 1998, whose species identification proved to be controversial. The bird was identified by its finder, and most others who saw it, as a first-summer Slender-billed Curlew, one of the rarest birds in the world; however, this identification provoked scepticism from some quarters. The bird was accepted as this species (and therefore became the first record of Slender-billed Curlew in Britain) by the British Birds Rarities Committee and the British Ornithologists’ Union Records Committee.

Opinions on the exact identity of the bird remain divided — the conclusion arrived at by BBRC and BOURC is shared by a significant majority of the British birding community, but a number of British birders are not convinced that the bird was a Slender-billed Curlew, including several high-profile figures. A first-winter curlew at Minsmere, Suffolk in October 2004 re-opened the debate on the identity of the Druridge bird. 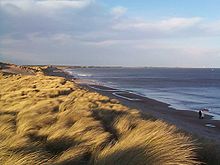 Druridge Bay, Northumberland, where the curlew was sighted

The bird in question was found by an unknown birdwatcher on Monday, May 4, 1998, and was first identified as a Whimbrel. The birder reported the Whimbrel to Tim Cleeves who, uncertain of the bird's identification, contacted a number of other birdwatchers from the Northumberland and Tyneside areas and asked them to come to Druridge to give an opinion. The bird was watched by six observers until 20.50 hours that evening.

News of the bird was broadcast on the national rare bird information services. As, at this stage, there was not a consensus on the identity of the bird, some of the services used cautious language, e.g. Birdline referred to the bird as a "controversial curlew thought by some observers to be a Slender-billed". Because of the uncertainty over the identity, some birders chose not to travel to see it, although many others did. The bird was last seen on Thursday May 7. It was photographed (albeit distantly) and three separate video-recordings were made.

Although the identification of this bird is generally credited to Tim Cleeves, Brett Richards (Birdwatch 118:11) has claimed that a large part of the credit for the record should rest with him, due to his role in persuading others to travel to see the bird. One should note Richards' prominence in identifying the bird compared to others who were apparently as adamant but somewhat less vocal, if not silent, in their views. 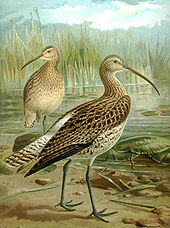 The bird was close in appearance to Eurasian Curlew, but differed in a number of features:

One other point of note is that the bird's upperwing-coverts were worn, and they had a silvery appearance, contrasting with its scapular feathers which were very dark.

Public discussion of the bird first surfaced on May 6, on the UKBirdnet mailing list, which at that time was the main internet discussion forum for British birders. Early postings from Phil Hansbro (based on a conversation with Brett Richards, who had been to see the bird) and from Ian Broadbent made a strong case for the identification as Slender-billed Curlew. Other observers raised questions, with three aspects causing concern:

In mid-June, Birding World published an account of the bird, written by Tim Cleeves, his first public statement on the bird. The article dealt in detail with the circumstances of the bird's finding, its appearance, his reasons for making a confident identification of the bird as a Slender-billed Curlew, ageing and sexing of Slender-billed Curlews, their conservation status and likelihood of vagrancy. The article was accompanied by an editorial comment endorsing Cleeves's views. Cleeves also wrote a short account for the July edition of Birdwatch magazine.

These two articles prompted letters from Chris Heard outlining reasons why he believed that the case for identification of the bird as a Slender-billed Curlew was not proven. In his letter to Birding World, Heard made comparisons with the Merja Zerga birds, which he had seen, and listed the following concerns:

An editorial comment was published in reply to this letter, which included comments made by a number of the observers involved with the Druridge bird. A letter to Birdwatch from Chris Heard outlined the same concerns, and pointed out also that Eurasian Curlew can show spotted flank patterning and white underwings. This letter drew a response from Brett Richards.

The editorial comment in Birding World (to which Brett Richards contributed), and Richards' letter in Birdwatch, responded to Chris Heard's concerns by making the following points:

The bird was accepted as the first record of Slender-billed Curlew for Britain by the British Ornithologists Union Records Committee and this was announced in a joint BBRC/BOURC press release on 24 January 2002.

This was followed by the publication in British Birds of an account by Tim Cleeves of the finding of the bird, and a summary of the BBRC analysis of submitted descriptions, photographs and video footage, written by Jimmy Steele and Didier Vangeluwe.

On August 9 and August 10, 2002, and possibly for a few days prior to that, another bird showing characteristics of Slender-billed Curlew was reported from Druridge Bay.[1] This bird was described as being 25% smaller than Eurasian Curlew with a slender bill tapering to a narrow point, with black spotting on its flanks, and unmarked white underwings. This bird was not photographed, and only seen by a small number of observers, and no formal submission was made to the Rarities Committee.

In October 2004, another bird showing some characteristics consistent with Slender-billed Curlew, was found, this time at RSPB Minsmere in Suffolk. This bird generated considerable debate, with some observers, including Didier Vangeluwe, who had travelled from Belgium to see the bird, stating that they believed it to be a Slender-billed Curlew. However, by the time this bird was last seen, most observers had formed the opinion that this bird was a first-winter Eurasian Curlew.

The discussion about this bird's identity reopened the debate about the Druridge bird.

Accounts of the bird's finding are given in:

The following are Chris Heard's letters expressing doubt about the bird's identity, and Brett Richards' reply to the second:

The paper by the British Birds Rarities Committee, explaining their decision to accept the identification is: