Though DSM-IV makes a firm distinction between the two, SIDs often occur in the context of SUDs.[4]

Some people can have strong drug cravings even after they have not used the drug for a long period of time. They call this being "clean". To figure out how the brain triggers these cravings they have done multiple test on mice.[5]

Substance-induced disorders include medical conditions that can be directly attributed to the use of a substance.[6] 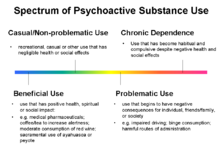 Substance use disorders include substance abuse and substance dependence.[8] In DSM-IV, the conditions are formally diagnosed as one or the other, but it has been proposed that DSM-V combine the two into a single condition called "Substance-use disorder".[9]