Sleep-deprived driving is the operation of a motor vehicle while being cognitively impaired by a lack of sleep. Sleep deprivation is a major cause of motor vehicle accidents, and it can impair the human brain as much as alcohol can. According to a 1998 survey, 23% of adults have fallen asleep while driving.[1] According to the United States Department of Transportation, male drivers admit to have fallen asleep while driving twice as much as female drivers.[2]

In the United States, 250,000 drivers fall asleep at the wheel everyday, according to the Division of Sleep Medicine at Harvard Medical School and in a national poll by the National Sleep Foundation, 54% of adult drivers said they had driven while drowsy during the past year with 28% saying they had actually fallen asleep while driving. According to the National Highway Traffic Safety Administration, drowsy driving is a factor in more than 100,000 crashes, resulting in 1,550 deaths and 40,000 injuries annually.[3]

The effects of sleep deprivation on driving performance

Sleep deprivation has been proven to affect driving ability in three areas:[4]

Fatigue can often be caused by sleep apnea. Obstructive sleep apnea (OSA) is a serious syndrome characterized by pauses in breathing that prevent air from flowing into or out of a sleeping person’s airways, resulting in excessive daytime sleepiness; sleep attacks, psychomotor deficits, and disrupted nighttime sleep [5] This is a narrowing or closure of the airway during sleep causing multiple disturbances [6] OSA also causes fatigue from disruptions in sleep which causes a decrease in alertness. This causes delays in psychomotor awareness and oculomotor activity.

The Effects of Sleepiness and Fatigue include:

Numerous studies have found that sleep deprivation can affect driving as much as (and sometimes more than) alcohol. British researchers have found that driving after 17 to 18 hours of being awake is as harmful as driving with a blood alcohol level of .05%, the legal limit in many European countries.[4] Men under 30 are more likely to be in an accident caused by sleep deprivation.[8] 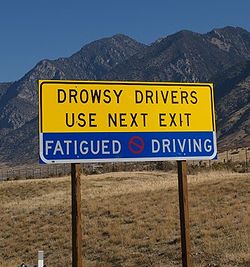 Sleep-deprived driving in truckers and in the military

Driver fatigue is a contributing factor in 12% of all crashes and 10% of all near-crashes[10]. There is a greater potential for injury with increasing size of vehicle and cargo type. Traffic fatalities are high and many of them are due to driver fatigue, yet sleepy driving is preventable[11]. Drivers with obstructive sleep apnea (OSA) have a 7-fold increased risk of being involved in a motor vehicle crash [5]. It is estimated the 2.4-3.9 million licensed commercial drivers in the US have OSA [5] out of the estimated 18 million total Americans [12]. The Federal Motor Carrier Safety Administration (FMCSA) says that as many 28 percent of commercial driver’s license (CDL) holders have sleep apnea [13]

Moderate and severe sleep apnea are disqualifying conditions for acquiring a CDL.

A physical exam is required to get a CDL. The physical includes health history and respiratory dysfunction but rarely detects sleep apnea.

Screening for sleep apnea includes: high risk based on Berlin questionnaire, a BMI greater than 33 kg/m2, and at risk based on clinical evaluation.

There are potential regulations proposed from an FMCSA expert panel that would increase the detection rate. These recommendations were proposed in 2008 [14]

Not all cases of sleep apnea are restricted from obtaining a CDL:

Criteria that lead to disqualification:

Six US states require physicians to report patients who drive while impaired, including those who may be chronically sleep-deprived.[16] Another twenty-five US states permit physicians to violate doctor-patient confidentiality to report sleep-deprived drivers or those with sleeping disorders likely to impair driving, if they so choose.[16] The American Medical Association endorsed physician reporting in 1999, but deferred to the states on whether such notification should be mandatory or permissive.[16] An authority on professional confidentiality, Jacob Appel of New York University, has written that physician reporting is a double-edged sword, because it may deter some patients from seeking care. According to Appel, "Reporting may remove some dangerous drivers from the roads, but if in doing so it actually creates other dangerous drivers, by scaring them away from treatment, then society has sacrificed confidentiality for no tangible return in lives saved."[16]

Governments had attempted to reduce sleep-deprived driving through education messages and by ingraining roads with dents, known as rumble strips in the US, which cause a noise when drivers wander out of their lane. The Government of Western Australia recently introduced a "Driver Reviver" program where drivers can receive free coffee to help them stay awake.[17]