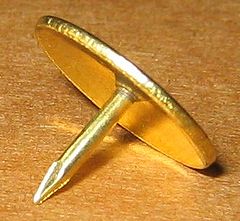 A drawing pin (British English), thumbtack (American English) , or push pin is a short nail or pin with a circular, sometimes domed, head, used to fasten items such as documents to a wall or board for display. Various designs and names are used. They are inserted and removed by hand, hence the terms "thumbtack" and "push pin". The term drawing pin comes from them being used to hold drawings on drawing boards.[1]

Thumbtacks made from brass are sometimes called brass tacks or brass pins. Some are made by attaching a metal stem to a flat metal head. Others are made from thin steel by stamping and bending a small narrow V-shape out of the head to form the pin (see "Stamped thumbtacks" image on right).

Map pins (also referred to as "thumbtacks" or "push pins") have a plastic head, often spherical, or handle, allowing easy removal, and often colorful, allowing different pins to be identified, such as points on a map, hence the term. Similar pins used in sewing are referred to as marking pins, and are used for marking points in fabric when sewing, or for holding fabric temporarily together.

Map pins are safer than flat-head thumbtacks when dropped or discarded, since they fall flat on surfaces, rather than pointing straight up, as can easily happen with simple metal thumbtacks.

Paper Crickets are new push pins with a flexible wing design that allows paper to be slipped in and hung without puncturing or damaging the paper. It is very strong and can hold multiple sheets or heavy and light paper without giving into the weight.

Pins have been used on maps at least since the time of Napoleon.[2] But the "map pin" was not patented until the early 1900's, when Edwin Moore founded his Moore Push-Pin Company.[3]

The thumbtack was invented either by clockmaker Johann Kirsten[citation needed] (between 1902 - 1903) in the city of Lychen, Germany, or by Mick Clay[citation needed] in 1903 in Barnsley, South Yorkshire, England.

The idea was sold to Otto Lindstedt, a businessman, who received a patent for the thumbtack on 8 January 1904. The patent made Lindstedt a millionaire. Other sources ascribe the thumbtack invention to Austrian factory owner Heinrich Sachs[citation needed] in 1888.