The Dragunov was designed as a squad support weapon, since according to Soviet and Soviet-derived military doctrines the long-range engagement ability was lost to ordinary troops when submachine guns and assault rifles (which are optimized for close-range and medium-range, rapid-fire combat) were adopted.

It was selected as the winner of a contest that included three competing designs: the first was a rifle designed by Sergei Simonov (known as the SSV-58), the second design, a prototype designated 2B-W10 by Alexander Konstantinov, and the third rifle, the SVD-137, a design submitted by Yevgeny Dragunov. Extensive field testing of the rifles conducted in a wide range of environmental conditions resulted in Dragunov’s proposal being accepted into service in 1963. An initial pre-production batch consisting of 200 rifles was assembled for evaluation purposes, and from 1964 serial production was carried out by Izhmash.

Since then, the Dragunov has become the standard squad support weapon of several countries, including those of the former Warsaw Pact. Licensed production of the rifle was established in China (Type 79 and Type 85) and Iran (as a direct copy of the Chinese Type 79).

The Dragunov is a semi-automatic gas-operated rifle with a short-stroke gas-piston system. The barrel breech is locked through a rotating bolt (left rotation) and uses three locking lugs to engage corresponding locking recesses in the barrel extension. The rifle has a manual, two-position gas regulator.

After discharging the last cartridge from the magazine, the bolt carrier and bolt are held back on a bolt catch that is released by pulling the cocking handle to the rear. The rifle has a hammer-type striking mechanism and a manual lever safety selector. The rifle's receiver is machined to provide additional accuracy and torsional strength. The Dragunov's receiver bears a number of similarities to the AK action, such as the large dust cover, iron sights and lever safety selector, but these similarities are primarily cosmetic in nature.

The weapon is fed from a curved box magazine with a 10-round capacity and the cartridges are double-stacked in a checker pattern.

The Dragunov's barrel is ended with a slotted flash suppressor. The barrel’s bore is chrome-lined[3] for increased corrosion resistance, and has 4 right-hand grooves with a 320 mm (1:12.6 in) twist rate. The rifled part of the barrel is 547 mm (21.5 in). Later the twist rate was tightened to 240 mm (1:9.4 in) which slightly reduces the accuracy of fire with sniper cartridges and reduces the muzzle velocity to 810 m/s (2,657.5 ft/s). This was done in order to facilitate the use of tracer and armor-piercing incendiary ammunition. These special bullet types required a shorter twist rate for adequate stabilization.[4]

For precision shooting, specifically designed sniper cartridges are used, developed by V. M. Sabelnikov, P. P. Sazonov and V. M. Dvorianinov. The proprietary 7N1 load has a steel jacketed projectile with an air pocket, a steel core and a lead knocker in the base for maximum terminal effect. The 7N1 was replaced in 1999 by the 7N14 round. The 7N14 is a new load developed for the SVD. It consists of a 151 grain projectile which travels at the same 830 m/s, but it has a sharp hardened steel core projectile. The rifle can also fire standard 7.62x54mmR ammunition with either conventional, tracer or armor piercing incendiary rounds.

The Dragunov has a vented, two-piece wooden handguard/gas tube cover and a skeletonized wooden thumbhole stock equipped with a detachable cheek rest; the latter is removed when using iron sights. Newer production models feature synthetic furniture made of a black polymer - the handguard and gas tube cover are more or less identical in appearance, while the thumbhole stock is of a different shape. 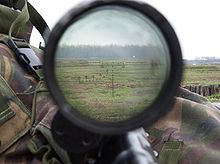 PSO-1's unique reticle. The rangefinder is in the lower left, chevrons for bullet drop compensation are found in the middle, and stadia marks for windage to the left and right of the center reticule. The reticule is illuminated by a small battery-powered lamp.

The rifle features mechanically adjustable backup iron sights with a sliding tangent rear sight (the sight can be adjusted to a maximum range of 1,200 m). The iron sights can be used with or without the standard issue optical sight in place. This is possible because the scope mount does not block the area between the front and rear sights.

The Dragunov is issued with a quick-detachable PSO-1 optical sight.[6] The PSO-1 sight (at a total length of 375 mm with a lens cover and sun shade, 4x magnification and 6° field of view) mounts to a proprietary side rail mount that does not block the view of the iron sight line. The PSO-1 sight includes a variety of features, such as a bullet drop compensation (BDC) elevation adjustment knob, an illuminated rangefinder grid, a reticle that enables target acquisition in low light conditions as well as an infrared charging screen that is used as a passive detection system. The PSO-1 sight enables targets to be engaged at ranges upwards of 1,300 m; effective ranges in combat situations have been stated at between 600 to 1,300 m, depending on the nature of the target (point or area target) quality of ammunition and skill of the shooter.[7][8]

Several other models of the PSO sight are available with varying levels of magnification and alternative aiming reticules.[9] Rifles designated SVDN come equipped with a night sight, such as the NSP-3, NSPU, PGN-1, NSPUM or the Polish passive PCS-6 and can be used to engage targets at night.

A number of accessories are provided with the rifle, including a blade-type bayonet (AKM clipped point or the AK-74 spear point bayonet), four spare magazines, a leather or nylon sling, magazine pouch, cleaning kit and an accessory/maintenance kit for the telescopic sight.

In the early 1990s a compact variant of the SVD designed for airborne infantry was introduced, known as the SVDS (short for Snayperskaya Vintovka Dragunova Skladnaya, "Dragunov Sniper Rifle with folding stock"), which features a tubular metal stock that folds to the right side of the receiver (equipped with a synthetic shoulder pad and a fixed cheek riser) and a synthetic pistol grip. The barrel was also given a heavier profile, the receiver housing was strengthened, the gas cylinder block was improved and a ported, conical flash hider was adopted.

The SVDS also comes in a night-capable variant designated SVDSN.

The SVU, compared to the SVD, has a considerably shorter overall length because of the bullpup layout and shortened barrel that also received a triple-baffle muzzle brake with an approx. 40% recoil reduction effectiveness. The rifle was equipped with folding iron sights (rear aperture sight in a rotating drum) and the PSO-1 telescopic sight.

A variant of the SVU, designed with a selective-fire capability and using 20-round magazines is called the SVU-A (A – Avtomaticheskaya).

In 1998 Poland adopted a modernized variant of the SVD designated the SWD-M, which uses a heavy barrel, bipod (mounted to the forearm) and LD-6 (6x42) telescopic sight.

The Dragunov also served as the basis for several hunting rifles. In 1962 the state armory in Izhevsk developed the “Medved” (Bear) rifle, initially chambered first in the 9x53mm cartridge and later in the 7.62x51mm NATO round for export. In the early 1970s Izhevsk introduced the “Tigr” (Tiger) hunting rifle with a fixed thumbhole stock without a cheekpiece. They were originally produced individually but since 1992 they have been made serially in batches. Today they are available with shortened (520 mm) and full length (620 mm) barrel, different stocks (including SVDS style folding stock) and chambered in 7.62x54mmR, .308 Winchester, .30-06 Springfield or 9.3x64mm Brenneke.

Another variant of the SVD is the Iraqi 7.62 mm Al-Kadesih sniper rifle. The Al-Kadesih while stylistically very similar to the SVD has some key differences. The Al-Kadesih has a unique pressed-metal receiver which is longer than that of the SVD, although the overall length of the rifle is similar to that of the SVD. It is fitted for and uses the Soviet-era PSO-I Optical Sight. Further the barrel is pinned, rather than screwed, to the receiver, although it is of the same length as that of the SVD. The fore-end has four longitudinal slots on each side instead of six short slots. Another readily visible distinguishing feature of the Al-Kadesih is that the magazine has an ornamental relief pattern showing a stylised palm tree.

The Dragunov is an original rifle design for several reasons. First, it was not meant for highly trained and specialized sniper teams, but rather for designated marksmen, spread in every basic infantry unit. In every platoon of Warsaw Pact troops, there was a Dragunov rifle marksman. In the German Democratic Republic arsenals alone, there were almost 2,000 Dragunov rifles,[10] while in many Western armies there was not even a single sniper rifle except in special forces units (as example, in the Italian Army until the 1990s), but in Warsaw Pact troop formations, the Dragunov marksmen were widespread among the regular units. To fulfill this role the rifle is relatively light for a sniper rifle but well balanced, making it easier to use in a dynamic battle. It also is a semi-automatic rifle, a rare feature for accuracy oriented rifles in the 1960s (except for customized ordnance, like M1 Garands), to allow rapid fire and quicker engagement of multiple targets. In order to fire effective API ammunition, its accuracy potential was slightly downgraded by shortening the twist rate, another uncommon priority for a pure sniper rifle. Its precision is good but not exceptional, also because it has a relatively light barrel profile. Like an assault rifle, the rifle has mounts on the barrel to fix a bayonet. The standard AKM bayonet can even be used to cut barbed wire. Lastly, the rifle was meant to be a relatively cheap mass produced firearm.

These features and unusual characteristics were driven by the tactical use doctrine of Dragunov armed marksman which was; from (just behind) the first line targeting high value targets of opportunity and providing special long-distance disrupting and suppressive fire on the battlefield, even with sudden close encounters with enemy troops in mind. A relatively small number of marksmen could assist conventional troops by combating or harassing valuable targets and assets such as: enemy key personnel like officers, non-commissioned officers and radio operators, exposed tank commanders, designated marksmen and snipers, machinegun teams, anti-tank warfare teams, etc.[11]

A Hungarian soldier takes aim with the SVD.

A U.S. Marine receives instruction on the SVD.