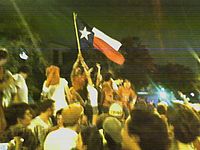 A spontaneous celebration on the drag after a Longhorns victory over Ohio State University. 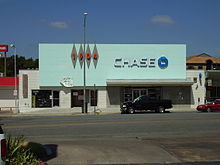 A Chase Bank on The Drag.

The Drag is a nickname for a portion of Guadalupe Street that runs along the western edge of the University of Texas campus in Austin, Texas.

The Drag began as a strip of shops which provided vital resources to UT students. Bookstores, restaurants, and clothing stores fulfilled student needs. The proximity to campus, particularly the Main Building and the Union Building, added to the popularity of the street.[1] At the start of each semester The Drag fills with students purchasing text books and school supplies.

The Drag is considered an important part of Austin's civic life, but in recent years many Austinites avoided it because of congestion. The area had fallen into disrepair, and some felt the area had become undesirable because of the presence of young panhandlers known as "Dragworms"[2], or more recently as "Dragrats."[3]