Draft evasion is a term that refers to an intentional failure to comply with the military conscription policies of the nation to which he or she is subject. Such practices that do not involve law breaking or which are based on conscientious objection are sometimes referred to as "draft avoidance." Refusing to submit the draft is considered a criminal offence in most countries where conscription is in effect.

Those who practice draft evasion are sometimes pejoratively referred to as "draft dodgers," a term which was made popular during the Vietnam War.

Draft evasion is distinct from desertion in that only an active member of a military service can become a deserter by absenting himself from military service without receiving a valid leave of absence or discharge and without any intention of returning to the service.

The term draft resister specifically refers to someone who explicitly refuses military service - simply attempting to flee the draft is draft evasion.

During the First World War, Canadians who did not want to be conscripted left for the US. The number of Canadians avoiding conscription via going to the US was in relative population terms less than the equivalent numbers of Americans coming to Canada during the Vietnam War.[citation needed]

Canada introduced conscription in 1940 via the National Resources Mobilization Act. While the move was not inherently unpopular outside of French Canada, the true controversy lay in the fact that conscripts were not compelled to serve outside of Canada (i.e. in combat zones). This changed in 1943 when the 13th Canadian Brigade of the 6th Canadian Infantry Division was embarked for combat employment against the Japanese in the Aleutian Islands. Several men deserted rather than embark; in the end, the brigade did not meet the enemy, which had fled. The fact that the Aleutians were technically North American soil had permitted the employment of the draftees, who were still not permitted to serve abroad by the conditions of their employment.

N.R.M.A. men were derisively known as "Zombies" by "G.S. Men" (those who had volunteered for General Service, or in other words, consented to serve in combat zones). Conscription had been a dividing force in Canadian politics in the First World War (precipitating a political crisis) and Prime Minister Mackenzie King vowed in the Second to introduce "conscription if necessary, but not necessarily conscription." In November 1944, following costly fighting in Italy, Normandy and the Scheldt, approximately 16,000 N.R.M.A. men were sent to Northwest Europe on the heels of a second crisis.

The number of men who actively sought to evade the draft in Canada is not known. Because of the delay in deploying them overseas, historians do not consider their number significant.

Although New Zealand did have a system of compulsory conscription commonly known as national service, it sent only "full time all volunteer professional soldiers" to Vietnam. Nevertheless, many New Zealand men refused to register for national service and lost their right to vote and were denied or removed from government employment. The government never acted on its threats of lengthy jail time for refusal. National Service, including its registration process, was abolished in December 1972.

The United States has employed conscription (mandatory military service, also called "the draft") several times, usually during war but also during the Cold War. It discontinued the draft in 1973, moving to an all-volunteer force. In the United States, refusal to serve is punishable by a maximum penalty of up to 5 years in Federal prison and/or a fine of US$250,000.

The Selective Service Act of 1917 was carefully drawn to remedy the defects in the Civil War system by allowing exemptions for dependency, essential occupations, and religious scruples and by prohibiting all forms of bounties, substitutions, or purchase of exemptions. In 1917 and 1918 some 24 million men were registered and nearly 3 million inducted into the military services, with little of the overt resistance that characterized the Civil War.[4]

In the United States during World War I, the word "slacker" was commonly used to describe someone who was not participating in the war effort, especially someone who avoided military service, an equivalent of the later term "draft dodger". Attempts to track down such evaders were called "slacker raids."[5] 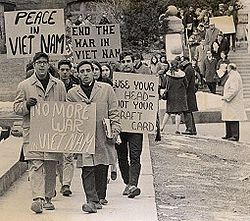 Anti-Vietnam War protesters at the University of Wisconsin–Madison. A placard reads "Use your head - not your draft card"

There was some opposition to the draft even before the major U.S. involvement in the Vietnam War. The large cohort of Baby Boomers who became eligible for military service during the Vietnam War also meant a steep increase in the number of exemptions and deferments, especially for college and graduate students. VA statistics show that U.S. troops in Vietnam represented a much broader cross section of America than is commonly believed and only 25% of troops deployed to the combat zone were draftees (compared to 66% during World War II).[6] A total of 8.615 Million men served during the Vietnam era and of them 2.15 Million actually served in the Combat Zone so less than 540,000 draftees went to Vietnam. Three-fourths of those deployed were from working families and poor youths were twice as likely to serve there than their more affluent cohorts although the vast majority of them were volunteers.[7] Some draft eligible men publicly burned their draft cards which was illegal but the Justice Department only brought charges against 50 of which 40 were convicted.[7]

As U.S. troop strength in Vietnam increased, more young men sought to avoid the draft. Enlisting in the Coast Guard, though it had more stringent standards for enlistment, was one alternative. Only 15,000 National Guardsmen were activated and sent to Vietnam.[7] Vocations to the ministry and the rabbinate soared, because divinity students were exempt from the draft.[citation needed] Doctors and draft board members found themselves being pressured by relatives or family friends to exempt potential draftees.

Other means included finding, exaggerating, or causing physical and psychological reasons for deferment, whether in the temporary "1-Y" classification, or the permanent "4-F" deferment. Physical reasons such as high blood pressure could get a man exempted. Antiwar psychiatrists could often find dormant mental conditions to be serious enough to warrant exemptions. Draft counselors, and the Selective Service System itself, emphasized that there was no such thing as an "exemption" from the draft, only a "deferment". Even the coveted status of 4-F (which by the late 1960s had lost its shameful connotation) was technically a deferment, implying that even 4-Fs might have to serve if America were invaded, as a home guard.

"Draft Dodger Rag", a 1965 anti-war song by Phil Ochs, circumvented laws against counseling evasion by employing satire to provide a how-to list of available deferments: ruptured spleen, homosexuality, poor eyesight, flat feet, asthma, caregiver for invalid relative, college enrollment, war industry worker, spinal injuries, epilepsy, flower and bug allergies, multiple drug addictions, and lack of physical fitness. Folksinger Arlo Guthrie lampooned the paradox of seeking a deferment by acting crazy in his song "Alice's Restaurant": "I said, 'I wanna kill! Kill! Eat dead burnt bodies!', and the Sergeant said, 'you're our boy'".[8] "1001 Ways to Beat the Draft" was a text on draft evasion by musician Tuli Kupferberg, a member of The Fugs. Methods he espoused included arriving at the draft board in diapers or feigning homosexuality. Another text popular with men subject to the draft was a 1950s cartoon novella by Jules Feiffer, Munro, in which a four-year-old boy is drafted by mistake. Some men, taking an idea from the book, said they might ask the sergeant at the draft examination to "button me, Mister".

The better educated and economically advantaged were in a better position to obtain deferments through loopholes or technicalities.[9][10] They had greater access to expert advice, counseling, psychiatric professionals and attorneys.

Many lawyers worked during the Vietnam war "pro bono" as draft counselors for the American Friends Service Committee and other antiwar groups to counsel men on their options.[citation needed] They were aware that laws, on the books since World War I, forbade Americans to counsel draft evasion. Therefore the AFSC was careful to present the potential inductee with his choices in neutral and factual terms.

During the Vietnam War, an active movement of draft resistance also occurred, spearheaded by the Resistance organization, headed by David Harris. The insignia of the organization was the Greek letter omega, Ω, the symbol for ohms—the unit of electrical resistance. Members of the Resistance movement publicly burned their draft cards or refused to register for the draft. Other members deposited their cards into boxes on selected dates and then mailed them to the government. They were then drafted, refused to be inducted, and fought their cases in the federal courts. These draft resisters hoped that their public civil disobedience would help to bring the war and the draft to an end. Many young men went to federal prison as part of this movement.

In 1969, in response to criticism of the draft's inequities, the U.S. government adopted a lottery system to determine who was called to serve. At the same time it implemented new standards that greatly restricted the availability of deferments.[10] They were ended for graduate students and limited for undergraduates.

Conscription ended in 1973. The end came after a series of lawsuits challenged the draft upon its re-enactment and renewed conscription in 1972 without regard to the 90-day waiting period required in the original Korean War era draft law (section 20 of the Act) that remained in the 1972 Act (which U.S. Attorneys defending conscription argued was as a result of a legislative drafting error). A series of challenges to the draft under section 20 in 1971 and 1972 lead by Justice William O. Douglas to issue an injunction against induction that covered the states in the jurisdiction of the Ninth Circuit Court of Appeals. It became so difficult for the Selective Service System to unwind the mess the Section 20 cases caused (and to draft men according to the priorities required by law—the "order of call" named after the "order of call" defense), that the draft was quietly ended—just in time for the wind down of the Vietnam War.

During the Vietnam War, only 30,000 of the 210,000 accused of dodging the draft left the country. A total of 30,000 deserters and draft dodgers combined went to Canada.[7] Though their presence there was initially controversial, the government eventually chose to welcome them. Draft evasion was not a criminal offense under Canadian law.[11] The issue of deserters was more complex, because desertion was a crime in Canada, and the Canadian military was strongly opposed to condoning it. In the end, the government maintained the right to prosecute these deserters, but in practice left them alone and instructed border guards not to ask questions relating to the issue.[12] Eventually, tens of thousands of deserters were among those who found safe refuge in Canada, as well as in Sweden, France, and the United Kingdom.

Those who went abroad faced imprisonment or forced military service if they returned home. The U.S. continued to prosecute draft dodgers after the end of the Vietnam War. In September 1974, President Gerald R. Ford offered an amnesty program for draft dodgers that required them to work in alternative service occupations for periods of six to 24 months.[13] In 1977, one day after his inauguration, President Jimmy Carter fulfilled a campaign promise by offering pardons to anyone who had evaded the draft and requested one. It antagonized critics on both sides, with the right complaining that those pardoned paid no penalty and the left complaining that requesting a pardon required the admission of a crime.[14]

Some draft dodgers returned home to the United States after the 1977 amnesty, but according to an estimate by sociologist John Hagan, around 50,000 settled in Canada.[15] This young and mostly educated population expanded Canada's arts and academic scenes, and helped push Canadian politics further to the left. Notable Americans who left for Canada and became prominent there include Jay Scott and Michael Hendricks. Other draft evaders from the Vietnam era remain in Europe.

Among the prominent political figures whose opponents have accused them of improperly avoiding the Vietnam-era draft were George W. Bush, Dick Cheney, and Bill Clinton.[16]