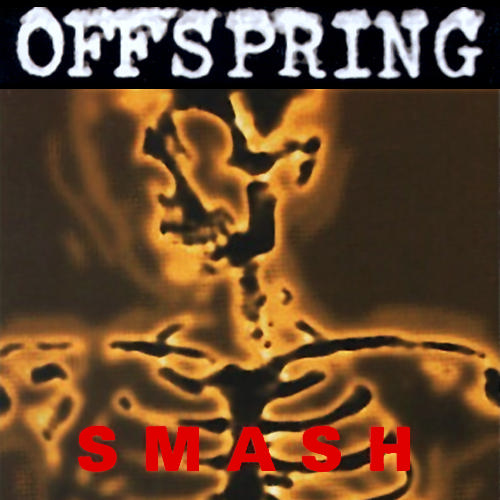 "Smash" is the third studio by American band . Released on , , "Smash" became a worldwide commercial success, reaching #4 on the U.S. Billboard 200 and #1 on the Heatseeker's Chart. The album helped bring the 1990s punk scene into the mainstream, [ [http://www.sortedmagazine.com/Albums.php3?nID=222 Sorted magAZine - Bad Religion] ] and became ' best-selling album since the release of 's "Suffer".

"Smash" produced four hit singles for the band: "Come Out and Play", "Self Esteem", "" and the radio-only single "Bad Habit". As of 2008, "Smash" is credited as the highest selling independent album of all time selling 14 million copies worldwide, [cite web | url=http://www.offspring.com/cgi-bin/WebObjects/Offspring.woa/wa/bio|title=Band Bio|accessdate=2008-02-02|publisher=TheOffspring.com] and has continued to sell consistently well in the fourteen years since its release. The album has also been certified 6x Platinum in the .

"Smash" was The Offspring's last album released on in (although a reissue of their 1989 self-titled debut album completed their contract). Their next album, "", was released on that label in .

On , , Epitaph re-released "Smash" along with "Ignition" in a remaster form. [ [http://www.epitaph.com/artists/album/545/Smash_Remastered "Smash" Remastered] ]

In 1991, The Offspring released the "Baghdad" 7". This EP was the turning point for the band; due to its success the band signed with Epitaph Records. , who produced The Offspring's first two albums, had been trying to get the Offspring to switch to Epitaph, a label run by guitarist . Gurewitz felt that The Offspring was just not quite pronounced enough for his label, but "Baghdad" convinced him to give the band a shot. Wilson and The Offspring entered the studio again and recorded "Ignition". Released in 1992, "Ignition" exceeded all of the label's and band's expectations. [ [http://www.thetabworld.com/Offspring_biography.html Offspring Biography] ] In the fall of 1993, The Offspring began recording their third album, entitled "Smash". The sessions took place at Track Record in North Hollywood. Recording sessions lasted from October to .

Although "Smash" has a dark, punk rock sound, the album is heavily influenced by the emerging pop punk scene. Bands like and Rancid were gaining popularity, and riding on this wave of popularity, "Smash"'s singles became modern radio rock hits. A good example of this was the success of The Offspring's first major single release, "Come Out and Play", which reached #1 on chart and has become the band's signature song."Come Out and Play" with a pop punk sound radically different from any of The Offsprings earlier work, soon became popular on radio and then on MTV. The song makes reference to the issue of gun and gang violence in the context of a school campus. The lyrics read, "Your never ending spree of death and violence and hate is going to tie your own rope."

The second single released from the album, "Self Esteem," became a radio hit, managing to peak at number 4 on the chart. The lyrics are about an relationship in which the girl takes advantage of her boyfriend, as he has "no self-esteem" to stand up to her. Contrary to popular belief, the song is not autobiographical as many people believe. In an interview Dexter revealed that it is about one of his old friends.

The third single, "" was another rock radio hit, although not quite as popular as the previous two singles. The song hit number 6 chart. The lyrics describe a point in Dexter's life when he was suffering from extreme pressure due to the upcoming deadline of the album.

Although not technically released as a single, "Bad Habit" gained some minor popularity when the influential L.A. radio station KROQ began playing the song in early 1995. It was erroneously published that it would be released as the band's then new single following the success of "Self Esteem."

"Smash" album was released on , and is the final Offspring album distributed via . The album peaked at #4 on Billboard's pop albums charts and #1 on the Heatseeker's Chart, [ [http://www.allmusic.com/cg/amg.dll?p=amg&sql=10:difixqwhld6e~T3 Chart information @ All Music Guide] ] performing better than thought possible for an independently released album.

The album received positive reviews, Stephen Thomas Erlewine of described the album a "solid record, filled with enough heavy riffs to keep most teenagers happy". Erlewine praised the music "relentlessly heavy". For the album, he claims that The Offspring had "crossed over", because of the success of its single "Come Out and Play," which "stopped and started just like Nirvana." "Smash" received a rating of four out of five stars, while "Come Out and Play", "Self Esteem" and "" earned The Offspring its heaviest airplay on and radio stations until the release of "Americana".

"Smash," as well as the hit singles "," "Self Esteem," and "" have a common artwork theme: an ominous (and highly distorted) skeleton on the cover, disc, and back of the CD case. This symbol is believed to represent the core themes of the album: death, suicide, violence, addiction, and abuse. The skeleton is used to represent that the continuation of these acts will inevitably lead to death (Or alternatively, the death of the human race). The art direction is credited to Fred Hidalgo and Kevin Head. ["Smash" Linear Notes]

Since its release in 1994, "Smash" has proved to be a seller over time, moving over 6,000,000 in the US alone and being certified six times platinum by the RIAA. By 2008, the same year the album was remastered, it had sold over 11,000,000 copies worldwide. [cite web | url=http://www.offspring.com/cgi-bin/WebObjects/Offspring.woa/wa/bio|title=Band Bio|accessdate=2008-02-02|publisher=TheOffspring.com] Many consider this to be The Offspring's most successful album to date. Despite its massive commercial success, it is not The Offspring's highest charting album on , peaking at #4; their fifth album "Americana" would hit #2 in 1998. "Smash" also sold well outside the US, particularly in , where it debuted #1 on the in 1995.