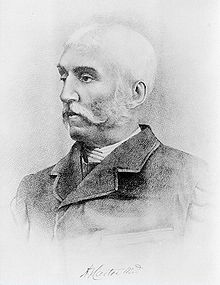 Henry Vandyke Carter (born in Hull) (22 May 1831- 4 May 1897) was an English anatomist, surgeon, and anatomical artist most notable for his illustrations of the book, Gray's Anatomy.

Henry Vandyke Carter was born on 22 May 1831, and was the eldest son of the artist Henry Barlow Carter. He was formally educated at Hull Grammar School before moving to London to study medicine at St. George's Hospital. In June 1853, Carter became a student in human and comparative anatomy at the Royal College of Surgeons, where he worked with Richard Owen and John Thomas Quekett.

He began work for Henry Gray and others in 1852, and in 1856 he drew the illustrations for the now famously illustrated Gray's Anatomy. The publishers of the first edition wanted to ascribe joint authorship of the book to Carter as his illustrations were just about as noteworthy as the text but Gray objected.[1][page needed]

Carter retired in 1888, and was subsequently appointed "Honorary Deputy Surgeon-General and Honorary Surgeon to the Queen". He died in Scarborough, North Yorkshire on 4 May 1897.