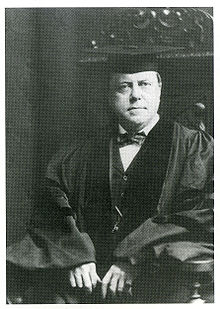 Dr. Roswell Park (May 4, 1852 – February 15, 1914) is best known for starting Gratwick Research Laboratory, which is now known as Roswell Park Cancer Institute. He was also a professor of surgery at the University of Buffalo Medical School and a surgeon at Buffalo General Hospital.[1]

When Dr. Park was thirty-one he came to Buffalo, New York in 1883. He came from Chicago where he attended Rush Medical College. He received his B.A. in 1872 and M.A. in 1875. Dr. Park received an honorary M.A. from Harvard University in 1895 and an honorary LL.D. from Yale University. Over the years he served on many boards, both national and international. By 1914, the total number of textbooks, articles, and monographs that he wrote reached 167.[1]

Buffalo was the host of the Pan-American Exposition in 1901. President William McKinley was not even a year into his second term. At the time he was staying in his summer home in Canton, Ohio. He left his summer home for the exposition fairgrounds. After a speech that he gave in the Temple of Music pavilion, Leon Czolgosz, came from the crowd and shot McKinley twice at point blank range. McKinley was taken to a hospital on the fairgrounds.[2]

It took nearly 40 minutes for the first surgeon to show up. Herman Mynter, a general surgeon from Buffalo, was the first to diagnose the president. After consulting with other physicians, it was agreed upon to perform an abdominal exploration of the area. Not long after Mynter’s examination was finished, Matthew Derbyshire Mann arrived. Mann was a former dean of Buffalo Medical School and a respected surgeon. After the two talked, it was agreed upon to perform the abdominal exploration. President McKinley agreed to the exploration. Work was done by Mann to try to find the bullet and treat the wounds.[3]

Efforts were made to contact Dr. Park, but he was in the middle of a neck dissection at Niagara Falls Memorial Hospital. As described years later by Park’s son, the messenger ran into the operation room and told Dr. Park that he was needed immediately.[4] Park proceeded to say “Don’t you see, I can’t leave. I am in the middle of a case even if it were for the President of the United States?” The Messenger replied “Doctor, it is for the President of the United States.” Park proceeded to finish the operation. Despite the importance of the situation, Park was only able to get to the exposition hospital via a train. Once Park arrived, Mann was about to close up McKinley and asked Park if there should be any placement of drains. Park told Mann that he was the best man to make that decision given the scenario. Mann decided not to drain the abdomen since there was no excess blood or fluid around to be drained.[5]