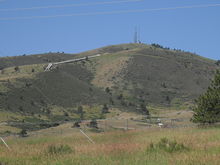 The Colorado-Big Thompson Project is a water diversion project in Colorado designed to collect West Slope mountain water from the headwaters of the Colorado River and divert it to Colorado's Front Range and plains. In Colorado, approximately 80% of the state's precipitation falls on the West Slope, in the Rocky Mountains, while around 80% of the state's growing population lives along the East Slope, between the cities of Fort Collins and Pueblo.

Today, the "C-BT" serves over 33 cities and towns in northeastern Colorado, including Fort Collins, Greeley, Loveland, Estes Park, Boulder, and Sterling, encompassed by 7 counties, providing a secondary source of water for around 830,000 people and an irrigated area of 650,000 acres (2,500 km²). Although water rights allow for up to 310,000 acre feet (380,000,000 m3) of water a year to be diverted, annual diversions average around 220,000 acre feet (270,000,000 m3), instead. A drop of over 2000 vertical feet from the Rockies down to the plains allows for power generation. Six power plants on the project produce an average supply of 759 million kilowatt hours of electricity a year. Like the water supply, generated electricity is supplemental. Electricity produced on the C-BT is a source of "peaking power" and is marketed by the Department of Energy via its Western Area Power Administration. 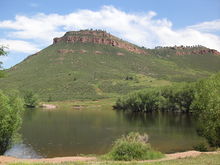 The water diversion involved is extensive and the project could not have been constructed without compensation to the West Slope for the water sent East. As a result, the first feature built on the C-BT was Green Mountain Dam and Reservoir, a West Slope facility designed to provide for future water demands in the state's Upper Colorado River Basin. The project was authorized by President Franklin Delano Roosevelt in 1937. Construction began on Green Mountain in the northern part of Summit County in 1938.

The C-BT is managed by Reclamation's Eastern Colorado Area Office under its Great Plains Region.