Brain Age 2: More Training in Minutes a Day! (stylized as Brain Age2),JPN also known as More Brain Training from Dr. Kawashima: How Old Is Your Brain? in PAL regions, is an edutainment video game and the sequel to Brain Age: Train Your Brain in Minutes a Day! (2005). It was published and developed by Nintendo for the Nintendo DS handheld game console. Before the game begins, the player must perform a Brain Age Check to determine their brain age, which ranges from 20 to 80, to determine approximately their brain's responsiveness. A brain age of 20, the lowest age that the player can achieve, indicates that the player's brain is as responsive as that of an average 20-year-old. After the player is told their initial brain age, they can complete a series of minigames to help improve their brain's responsiveness, after which they can run Brain Age Check again to determine their updated brain age.

Critics were generally favorable towards Brain Age 2, which received aggregated scores of 77% from Metacritic and 79.04% from GameRankings. Praise focused on improvements made on Brain Age, while criticism targeted the game's inability to consistently understand written and spoken answers. The game was voted IGN's Reader's Game of the Month for August 2007. In the United States, it was the 13th best-selling game in its debut month, and climbed to 9th place in September 2007, selling 141,000 copies in that month. In Japan, Brain Age 2 was the best-selling game in its debut month, selling 1,084,857 units. As of July 2007, 5.33 million copies of Brain Age 2 have been sold in Japan.

Brain Age 2 is played with the Nintendo DS held sideways.

All of the minigames in Brain Age 2 are different from those of the original Brain Age. Brain Age 2 contains six minigames: Rock, Paper, Scissors, Serial Subtraction, Symbol Match, Math Recall, Number Memory, and High Number. The game's Training mode includes the following activities: Sign Finder, Piano Player, Word Blend, Word Scramble, Change Maker, Calendar Count, Memory Sprint, Math Recall, Clock Spin, and Block Count. During their training, the player can collect stamps by completing minigames, and only one stamp can be collected per day. When a certain numbers of stamps are collected, new minigames and features are unlocked.[2] 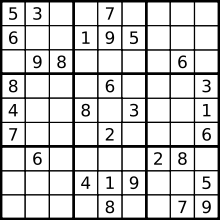 At a Nintendo press conference in Tokyo, Japan on October 5, 2005, the company announced several games that it would be releasing in 2006 in Japan. The list included Brain Age 2, with a release date set for December 29, 2005.[3] Nintendo later announced that the game would be released in Europe on June 29, 2007 for €30,[4] and in Australia on July 5, 2007 for AU$49.95.[5] The American version of Brain Age 2 was first revealed in May 2007.[6] The game is targeted to casual gamers, similar to its predecessor;[7] its basic concepts stay the same as in Brain Age, along with the graphics, menu, and presentation. Brain Age 2 also uses the same Sudoku engine, an addition in the original Brain Age that has been applauded for being one of the best handheld Sudoku games available;[6] Brain Age 2's rendition of Sudoku introduces 100 new puzzles.[7] All of the minigames in the game are new to the series; however, some of them are derived from exercises in Brain Age. One of the challenges in the first game, Head Count, requires that the player count how many people are shown on the screen; after a few seconds, a house falls on top of them, and then several people leave and enter the house. Afterward, the player must write down how many people they think is still in the house. A variation of this game is available in Brain Age 2, called Memory Sprint, which asks the player to observe a specific sprinter in a race as they pass other sprinters and are passed themselves, and then determine which place they finished in after they cross the finish line. The game's voice recognition technology has improved since the last game. The only challenge that uses the feature, Rock, Paper, Scissors, requires that the player speak the correct answer into the microphone as soon as possible.[6]

Nintendo's advertising campaign for Brain Age 2 featured several celebrities. The company announced on June 25, 2007 that Australian actress Nicole Kidman would appear in European television and newspaper advertisements to promote the game. Nintendo chose to feature her because of "her universal appeal to mainsteam audiences of all ages and backgrounds, as well as her reputation for being intelligent, entertaining and genuine".[8] Kidman praised Nintendo's desire to reach out to new audiences with self-improvement products, and found that playing the game made her feel young.[8] Nintendo also chose professional swimmer Kieren Perkins to promote Brain Age 2 in his native Australia, who commented, "Having used the original Dr Kawashima's Brain Training game for a while now, I was genuinely looking forward to all of the new ways I could exercise my mind. More Brain Training is the perfect way for me to continue my Brain Training workout, while keeping the activities fresh and interesting."[9] In the United States, print advertisements and television commercials for the game featured American actress Liv Tyler.[10]

Brain Age 2 was released by Nintendo for the Nintendo DS in Japan on December 29, 2005, in Europe on June 29, 2007, in Australia on July 5, 2007, and in North America on August 20, 2007.[22] A Brain Age 2 Nintendo DS bundle was released in North America on August 21, 2007, which included a copy of Brain Age 2 and a Nintendo DS colored crimson on the top and matte black on the bottom.[23] At a Nintendo Conference on October 2, 2008, Nintendo's president Satoru Iwata announced during his keynote address that both games in the Brain Age series were redeveloped as two DSiWare games called Small Brain DSi Training Everyday for Adults Literature Edition and Science Edition. The DSiWare iterations include training modes from the previous two Nintendo DS games, including new ones that take advantage of the Nintendo DSi's camera.[24] Brain Age 2 was given generally favorable reviews, receiving aggregated scores of 77% from Metacritic and 79.04% from GameRankings. Praise focused on improvements made on Brain Age, while criticism targeted the game's inability to consistently understand written and spoken answers.[1] The game was voted IGN's Reader's Game of the Month for August 2007.[25]

Remarking that Brain Age 2 uses the same formula as Brain Age "with some different variables thrown in", Game Informer noted that players' opinions of the original Brain Age will most likely be similar to how much they appreciate Brain Age 2.[13] GameZone was excited about the Sudoku portion of the game, which they complimented was "worth the entire game itself and will provide many hours of fun". They found the daily training and quick play modes "simply addictive", and appreciated the game's "simple and easy to use interface".[17] The video game website IGN felt differently, however, noting that the challenges felt fresh, with the exception of Sudoku. IGN agreed with GameZone on a particular point, however, writing that both the original Brain Age, and Brain Age 2, have "calm, clean interface[s]".[18] The television series X-Play was intrigued by Brain Age 2's promise to improve a person's intelligence.[20] GameSpy called the game "the ideal video game gateway drug" because of its accessibility to a wide variety of people, lack of requirements for special physical dexterity or experience, and regular reward system to motivate the player. They also considered Brain Age 2 a "noble effort towards the betterment of our mental health through a painless training regimen".[16] Game Revolution complimented the game's intelligent use of Nintendo DS features, "fun" sound effects, and "competent" handwriting recognition.[15] Singapore's The Straits Times considered Brain Age 2 a good investment, despite noting that hardcore gamers might find the minigames "gimmicky".[21] Recognizing that Nintendo intends to use the game to target baby boomers, The Globe and Mail writes that they were tempted to play the game at work and justify it as a self-improvement program.[26]

Even though 1UP.com noticed slight improvements in Brain Age 2, they found that it also introduced new issues. They considered it difficult for the game to understand their writing, and were also displeased with what they perceived as an arrogant tone with Dr. Kawashima, the game's avatar.[12] Disappointed with the lack of new additions to Brain Age 2, GamePro asked readers "[not to] expect too much more content than new tests and more Sudoku grids".[14] Nintendo World Report was also unhappy with the game, telling players who were "hoping for an overhaul [...] to wait for the inevitable Brain Age 3".[19] The Toronto Star reminded its readers that although Brain Age 2 bills itself as a game that is able to make players smarter, it actually means that "the word smart has been temporarily re-defined to mean 'good at playing Brain Age 2.'"[27]

A survey conducted by Alain Lieury, a professor of cognitive psychology at the University of Rennes 2 – Upper Brittany, indicates that working on exercises with a pencil and paper is just as good as Brain Age 2 at stimulating the memory. After evaluating ten-year-old children, the survey found "no evidence to support claims in Nintendo's advertising campaign, featuring Nicole Kidman, that users can test and rejuvenate their grey cells".[40] Lieury finds Brain Age 2 acceptable as a game, but considers it charlatanism for Nintendo to claim it as a scientific test, countering the company's assertions that its edutainment products such as Big Brain Academy and Brain Age 2 can improve blood flow to the brain and supposedly improving "practical intelligence".[40] Regarding whether or not brain training games are effective, Graham Lawton of New Scientist wrote, "All things considered, it's hard not to conclude that brain training has been proven to work—under certain circumstances. [...] It's also worth pointing out that no study has shown that brain training makes cognitive abilities any worse." Lawton notes that Nintendo avoids providing evidence that its Brain Age series actually leads to noticeable improvements in brain functions, and that it instead "is careful not to claim that Brain Age is scientifically validated, merely stating that it is an entertainment product 'inspired' by [Dr. Ryuta Kawashima's] work."[41]