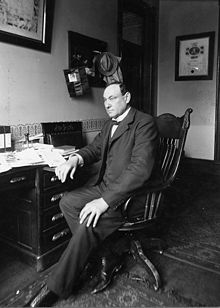 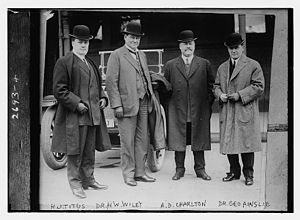 Harvey Washington Wiley (October 18, 1844 - June 30, 1930) was a noted chemist best known for his leadership in the passage of the landmark Pure Food and Drug Act of 1906 and his subsequent work at the Good Housekeeping Institute laboratories. He was the first commissioner of the US Food and Drug Administration. He was awarded the Elliott Cresson Medal of The Franklin Institute in 1910.

Wiley was born on October 18, 1844 in a log farmhouse near Kent, in Jefferson County, Indiana, the son of a farmer. He enrolled in nearby Hanover College in 1863 and studied for about one year until patriotism inspired him to enlist with the Union Army in 1864 as a corporal in Company I of the 137th Regiment Indiana Volunteers during the American Civil War. He returned to Hanover in 1865 where he majored in the humanities and was a top graduate (A.B.) in 1867. He received an A.M. there in 1870. Wiley studied at Indiana Medical College where he received his M.D. in 1871. He was professor of Greek and Latin at Butler College, Indianapolis, 1868-70.[1]

After he graduated, Wiley accepted a position teaching chemistry at the medical college, where he taught Indiana's first laboratory course in chemistry beginning in 1873. Following a brief interlude at Harvard University, where he was awarded a B.S. degree in 1873 after only a few months of intense effort, he accepted a faculty position in chemistry at the newly opened Purdue University in 1874. He was also appointed state chemist of Indiana.

In 1878, Wiley travelled overseas where he attended the lectures of August Wilhelm von Hofmann — the celebrated German discoverer of several organic tar derivatives, including aniline. While in Germany, Wiley was elected to the prestigious German Chemical Society founded by Hofmann. Wiley spent most of his time in the Imperial Food Laboratory in Bismarck working with Eugene Sell, mastering the use of the polariscope and studying sugar chemistry. Upon his return to Purdue, Wiley was asked by the Indiana State Board of Health to analyze the sugars and syrups on sale in the state to detect any adulteration. He spent his last years at Purdue studying sorghum culture and sugar chemistry, hoping, as did others, to help the United States develop a strong domestic sugar industry. His first published paper in 1881 discussed the adulteration of sugar with glucose.

Wiley was offered the position of Chief Chemist in the United States Department of Agriculture by George Loring, the Commissioner of Agriculture, in 1882. Loring was seeking to replace his chemist with someone who could employ a more objective approach to the study of sorghum, the potential of which as a sugar source was far from proven. Wiley accepted the offer after being passed over for the presidency of Purdue, allegedly because he was "too young and too jovial," unorthodox in his religious beliefs, and also a bachelor. Wiley brought with him to Washington a practical knowledge of agriculture, a sympathetic approach to the problems of agricultural industry and an untapped talent for public relations. [Suzanne White, "Chemistry and Controversy: Regulating the Use of Chemicals in Foods, 1883-1959, unpublished dissertation, Emory University, 1994, pp. 4-5.]

After assisting Congress in their earliest questions regarding the safety of the chemical preservatives then being employed in foods, Wiley was appropriated $5,000 in 1902 to study the effects of a diet consisting in part of the various preservatives on human volunteers. These famous "poison squad" studies drew national attention to the need for a federal food and drug law.

Wiley soon became a crusader and coalition builder in support of national food and drug regulation. His work with Alice Lakey spurred one million American women to write to the White House in support of the Pure Food and Drug Act.[2]

Wiley was nicknamed the "Father of the Pure Food and Drugs Act" when it became law in 1906. Wiley authored two editions of Foods and Their Adulteration (1907 and 1911), which detailed the history, preparation and subsequent adulteration of basic foodstuffs to a broad audience. He was also a founding father of the Association of Official Analytical Chemists, and left a legacy to the American pure food movement as its "crusading chemist" that was both broad and substantial.

The fact that enforcement of the federal Pure Food and Drug Act of 1906 was given to the Bureau of Chemistry rather than placed in the Department of Commerce or the Department of the Interior is a tribute to the scientific qualifications which the Bureau of Chemistry brought to the study of food and drug adulteration and misbranding. The first food and drug inspectors were hired to complement the work of the laboratory scientists, and an inspection program was launched which revolutionized the country's food supply within the first decade under the new federal law.

Wiley's tenure was marked by controversy over the administration of the 1906 statute which he had worked so hard to secure. Concerns over preserving chemicals, which had not been specifically addressed in the law, continued to be controversial. The Secretary of Agriculture appointed a Referee Board of Consulting Scientists, headed by Ira Remsen at Johns Hopkins University to repeat Wiley's human trials of preservatives. The use of saccharin, bleached flour, caffeine, and benzoate of soda were all important issues which had to be ultimately settled by the courts in the early days under the new law.

Under Wiley's leadership, however, the Bureau of Chemistry grew significantly, both in strength and in stature after assuming responsibility for the enforcement of the 1906 Act. Between 1906 and 1912, Wiley's staff expanded from 110 to 146. Appropriations, which had been $155,000 in 1906 were $963,780 in 1912. The Bureau moved into its own building and used the healing symbol of Aesculapius' staff, or Ophiuchus. In 1911, his enemies urged for his dismissal from the Department of Agriculture on the technical charge that an expert in his department had received recompense exceeding the legal rate. Later in the year, President Taft wrote a letter wholly exonerating Wiley.[1]

On March 15th of 1912 Dr. Wiley resigned because from nearly the beginning he had been antagonized in the enforcement of the Pure Food And Drugs Act, and had seen the fundamental principles of that act either paralzyed for discredited. [3]

In 1912, Wiley resigned and took over the laboratories of Good Housekeeping magazine, where he continued his work on behalf of the consuming public. His disapprobation of “drugged” products included cola drinks: he warned against the caffeine in them as vehemently as he would have against the cocaine they had once contained. In a famous action brought against the Coca-Cola company in 1911, he contended that it was illegal to use the name Coca-Cola when there was no actual cocaine in the drink, and also that it was illegal for it to contain caffeine as an additive. Perversely, this was as much as to say that the product ought to have contained cocaine and not caffeine. Still, the case was a landmark in developing standards for truth in labelling.

He remained with Good Housekeeping for 18 years.

Harvey Wiley died at his home in Washington, D.C. on June 30, 1930, the 24th anniversary of the signing of the Pure Food and Drug law. He is buried in Arlington National Cemetery with his wife Anna Kelton Wiley (1877–1964) whom he married in 1911.

Harvey W. Wiley has been honored in a number of ways since his passing:

The Harvey W. Wiley Award is AOAC International's most prestigious scientific award established in 1956 and presented annually since 1957 to a scientist (or group of scientists) who have made an outstanding contribution to analytical method development in an area of interest to AOAC International. AOAC International was originally founded in 1884 as the Association of Official Agricultural Chemists. Wiley as a founding member, President in 1886, Secretary from 1889 to 1912, and Honorary President until his death in 1930.

Wiley has several buildings named in his honor. Wiley was honored by Hanover College with a "Wiley Residence Hall" inaugurated in 1956. He was also honored by Purdue University in 1958 when the "Harvey W. Wiley Residence Hall" was opened northwest of the main academic campus. The FDA's Center for Food Safety and Applied Nutrition (CFSAN) operations are located in the Harvey W. Wiley Federal Building in College Park, MD, constructed in 2001, and named after Wiley in 2002.

His birthplace near Kent is commemorated with an Indiana historic marker sign placed at the corner of IN-256 & CR-850W. The marker was sponsored by the Association of Food and Drug Officials and erected in 1981.

The French government named him a Chevalier of the Order of the Légion d'honneur in 1909.

The Harvey Washington Wiley Distinguished Professor of Chemistry is an honor established through the Chemistry department at Purdue University. The position has been occupied since 1997 by Dr. Dale W. Margerum.

The home he built at Somerset, Maryland in 1893, the Wiley-Ringland House, was listed on the National Register of Historic Places in 2000.[4]

He also edited a series of Health Readers for Schools in 1919.