Brainiac: Science Abuse (often shortened to simply Brainiac) is a British entertainment TV show with a science motif. Numerous experiments are carried out in each show, often to verify whether common conceptions are true (such as whether it is possible to run over a pool of custard) or simply to create impressive explosions. The show centres on the three core branches of science for the key stages in British education: chemistry, physics and to a lesser extent, biology. The experimenters on the show are referred to as "Brainiacs", and each episode usually finishes with the destruction of a caravan.

The show is produced by ITV umbrella studios Granada Productions (collaboration between London Weekend Television and Granada Television in Manchester) and is broadcast in the United Kingdom and the Republic of Ireland on Sky Digital.

The programme was a huge ratings success for Sky and became one of the channel's flagship programmes. Ratings fell and it was eventually cancelled due to the poor demographics. A sister programme, Brainiac: History Abuse, presented by Charlotte Hudson, began airing on Sky1 on 1 June 2005, and a live version, Brainiac's Test Tube Baby, was broadcast in 2006 alongside the fourth series.

Brainiac: Science Abuse has been broadcast in a number of channels outside the UK.

In the U.S., it first began airing on G4 on 29 August 2005 as part of the Midnight Spank programming block; and is also shown on VIVA in Germany, JIMtv in Belgium, Veronica in the Netherlands, Skai TV in Greece, Channel 8 in Israel, True Visions in Thailand, Network Ten and The Comedy Channel in Australia, TV2 in New Zealand, Cuatro in Spain (only parts of it because they did their own Brainiac programme), Nelonen in Finland, in Singapore on MediaCorp TV's okto and in the Philippines on Jack TV. It has also been broadcast on Discovery Channel or one of its sister channels (such as The Science Channel) in a number of other countries. Furthermore, MBC Action started airing it on 13 October 2008 and in the Middle East.

Brainiac: Science Abuse plays music in every episode, including hits by Britney Spears, C & C Music Factory, and Elton John. Some are themes of various recurring segments such as "There's No One Quite like Grandma" sung by the St Winifred's School Choir for the Granny Brainiac segments in Series 3. The "I Like Hard Things" segment normally features heavy rock music such as Linkin Park or Limp Bizkit. The segment "I Can Do Science, Me" uses the track "I Am A Scientist" by the Dandy Warhols.

The Title music and many of the incidental tracks used in the show were composed by Grant Buckerfield.[2]

Much of the non-original music was changed for the DVD releases for copyright reasons. 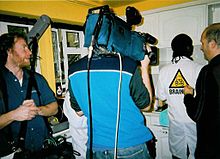 The first series of Brainiac: Science Abuse aired in 2003 and featured a wide variety of experiments including testing to see whether a mobile phone would ignite petrol vapours, walking on custard and testing the effects of electric shocks on various Brainiacs.

The second series premiered on Sky1 in 2004 and G4 on 29 August 2005. It saw the start of "Brainiac Snooker", in which World Snooker professional Quinten Hann would pot the last six balls on a table into pockets connected to fuses which, upon potting a ball causing a caravan rigged with a different explosive to explode.

The second series also introduced Charlotte Hudson as a third, but minor, host, and saw the introduction of what then became long term character "Professor Myang-Li", played by Rachel Grant.

The third series premiered on Sky1 on 25 August 2005 and on G4 in Spring 2006. It featured Brainiac Golf (similar to Brainiac Snooker, but exploding caravans filled with different substances that exploded with coloured flames depending on the chemicals used), Lad v. Lass, Thermite, "Does being electrocuted affect your ability at work?" (human statue, flair bartending, darts player), "Things the instruction manuals don't warn you about", 47 Second Science, Diana Ross and her Chain Reaction, and testing which things break and which things bounce after a ten foot drop.

Dr. John P. Kilcoyne, Associate Dean of the University of Sunderland had a regular slot where he mixed various chemicals to see whether they "fizz" or "bang".

The fourth series premiered on Sky1 on 16 July 2006, and on G4 in Spring of 2007. It introduced Brainiac Darts, during which Bobby George threw a perfect set, always finishing on the Double Top which triggered the explosion of a caravan, and a new "I Can Do Science Me" which is set around auditions. There is also a feature called "Things What My Body Does", in which a member of the public is filmed doing something extraordinary with their bodies. It also featured "Movie Stars Destroying Cars" and Dr. John P. Kilcoyne with "Glow or Blow".

It also introduced a new feature called "Brainiac for a Day", where contestants could bring an item of their choice to blow up. It was set out as a game show with the hosts Dolly Girl (Lisa Marie Bourke) (previously "Jane" in the "Lad v. Lass" segment) and Dolly Boy (Stefan D'Bart).

It premiered on 8 May 2007 on Sky1 and was simulcast in HD on Sky1 HD. The series retained "Brainiac For A Day", "Things What My Body Does", and contains new segments like "Brainiac V Beast", Dr Kilcoyne with "Fizzle or Flash" and Prof. Myang Li (Rachel Grant) with steel balls, attempting to "shatter or shunt" various objects. In addition, Vic Reeves appeared as the Russian scientist Uri Abusikov,along with his object of affection his assistant the hideously ugly Ursula, attempting to destroy things with liquid nitrogen.

In this series, Vic Reeves took over as host from Richard Hammond, who had quit the show. Hammond's growing commitments to Top Gear and his contract with the BBC meant that he was finding it increasingly difficult to fulfil his role as presenter of Brainiac. Hammond was also reportedly losing interest in doing Brainiac. Vic Reeves was brought in as replacement host shortly after the end of the fourth series and before Richard Hammond's near fatal crash. The original production team left the programme at the same time as Hammond.

With Vic now presenting, he introduced the "alternative humour" brand that Vic was famous for in the 1990s with his comedy partner, Bob Mortimer.

Premiering on 13 January 2008 on Sky1, this series saw the return of Vic Reeves as host and Jon Tickle as co-host. Thaila Zucchi replaced Hudson as the third co-host and made her debut on the series in two items: "How Hard is Your Thing?" in which she tests the hardness of different objects using thermite and a tonne of bricks dropped from a crane, and "Shocking Acts" in which she finds out whether variety acts can still perform while receiving electric shocks. Other new segments included "Gas Bang Wallop" featuring a character called Barry Bernard who destroys things with gas, "Chemistry Deathmatch" in which regular characters Dr Bunhead and Professor John Kilcoyne go head-to-head to produce the best experiments, "Custard Dreams" which follows the adventures of a Brainiac who discovers he can walk on custard, and "Stars in Their Caravans" which sees a variety of UK celebrities trapped in caravans, in a mock game show which results in large explosions

Brainiac Live! is the name of the live stage tour of Brainiac, touring nationally from March 2008. The official description of the show is "Brainiac Joe escapes from Brainiac HQ and with your help delves fearlessly into the mysteries of science. It's a breathless ride through the wild world of the weird and wonderful. So book your tickets now and do all of those things on stage that you're too scared to do at home!"[3]

Since 2010, Brainiac Live has also been touring as a show around the UK, visiting holiday camps, such as Butlins, has performed in the UAE and has been a headlining show for the UK's Big Bang Event

The presenters perform unusual experiments or demonstration procedures "so you don't have to". The destruction of caravans is a recurring theme in many of the episodes. These experiments are often non-scientific and are undertaken in the interests of entertainment (many involving large explosions) rather than any science. The show does however do a reasonable job of demonstrating some simple concepts of experimental design.

At least one faked result has surfaced (the alkali metal experiments).[4]

One experiment conducted by Brainiac aimed to illustrate periodic trends in the alkali metal series. It showed the violent reactions of metallic sodium and potassium with water, in which the hydrogen produced subsequent explosions, and intended to demonstrate the even greater reactivity of rubidium and caesium by dropping them into a water-filled bathtub. However, the reaction was not particularly spectacular, and the crew substituted explosives for the alkali metals. This is clearly visible in the footage, in which an "explosives" sign can be seen on the premises, and an exploding cloud of hydrogen gas, which one would expect in an alkali metal reaction with water, was not visible.[5]

The Brainiac staff have admitted that the explosions had been faked.[4][6] According to Tom Pringle, Brainiac's "Dr Bunhead", very little occurred in the real reaction of caesium and water, as the large volume of water over it drowned out the thermal shock wave that should have shattered the bathtub. The crew decided to set up a bomb in the tub and use that footage to generate the explosion.[4]

Similar experiments with caesium or rubidium have been repeated; these include Popular Science columnist Theodore Gray's experiments,[7] the "Viewer Special Threequel" episode of MythBusters, and an attempt made as part of the Periodic Table of Videos series created by several faculty members at the University of Nottingham.[8] In no case were the rubidium and caesium reactions nearly as violent or explosive as depicted on Brainiac.

However, a much earlier and more successful attempt was shown on British TV in the 1970s as part of the Open University programmes. Here, rubidium splatters around as soon as it hits the water's surface (with some parts sinking and creating more violent bangs). Caesium, on the other hand, does create an explosion and destroys the apparatus, mainly due to the fact that the metal sinks well into the water and creates a large "cone" of hydrogen gas before it ignites and explodes. This video is available online at The Open University.[9]

1 The Christmas special from series 2 is not included in the complete Series 1 + 2 box set due to legal reasons.[citation needed]