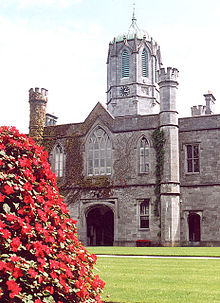 The university is located near the centre of the city and stretches along the River Corrib. The oldest part of the university, the Quadrangle, designed by John Benjamin Keane, is a replica of Christ Church, one of the colleges at the University of Oxford. The stone from which it is built was supplied locally. Newer parts of the university sprang up in the 1970s and were designed by architects Scott Tallon Walker. The 1990s also saw considerable development including the conversion of an old munitions factory into a student centre. Recent developments include a state-of-the-art University Sports Centre (Ionad Spóirt), a new Health Science Building, Cairne's School of business and the Engineering Building.

Presidents of the university 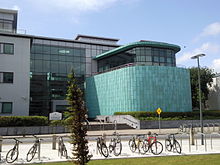 Staff are represented by the SIPTU trade union (for academic, research, administrative and technical workers) and the Irish Federation of University Teachers (for academic workers only). 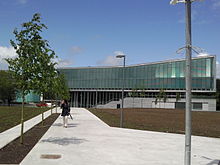 The Sunday Times University Guide named the university as Irish University of the Year 2002-2003, 2009-2010.[1] NUI Galway was placed at 232 in the 2010 THE–QS World University Rankings.[2] This increase to 232nd in the world, was the third consecutive jump for NUI Galway, and represented an increase of an incredible 252 places in just three years. This result confirms NUI Galway’s position as one of Ireland’s leading universities, and a growing force in research on the international stage”. The 2011 QS World Rankings put NUIG at 298 worldwide.

NUI Galway has also announced details of plans[4] to make the university a 'campus of the future',[5] at a cost of around €400 million.

NUI Galway formed a strategic alliance with University of Limerick in 2010, allowing for shared resources.[6]

With approximately 17,000 students, the university boasts an active and vibrant student life, with over 60 sports clubs and over 83 active societies. The oldest society on the campus is the Literary & Debating Society, founded in 1846. Another of the campus's oldest societies is appropriately enough that dedicated to the subject area of history, now known as the Cumann Staire[7] (or the Historical Studies Society). Cumann Staire is a leading member of the Comhaltas na gCumann Staire - Irish History Students' Association and the International Students of History Association.

The Film Society produces original films and founded the NUI Galway Student Cinema; one of the most popular venues for students with multiple films per week. The Business Society aims to get more students thinking about business and opening their minds to new ideas or to help students who want to get involved in business in any form in the future. The Computer Society hosts all other societies emails and websites, and have one of the largest memberships. The Rotaract Society, part of the international Rotary family, hosts the annual charity fashion show, 'Socs in the City'. The college's Drama Society (Dramsoc)[8] has also been long regarded as one of the most important student societies for the arts in Galway having played a part in the formation of Macnas, Druid Theatre Company and The Galway Arts Festival. GUMS, the university's vibrant award winning musical society continues to draw large crowds to its annual musicals in the Black Box Theatre. This event is one of the highlights of the college year calender, usually held in February during the Muscailt Arts festival. 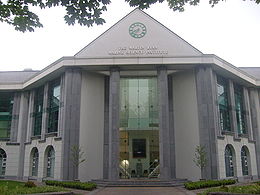 In February the university hosts annually an on-campus arts festival entitled Múscailt[9] (meaning to awake/inspire/celebrate in Irish). The annual festival showcases the emerging artists of the university. Almost every society on campus has input. Various shows, concerts and exhibitions are displayed throughout the college. The week often features various inter-varsity or on-campus competitions and award ceremonies.

The ALIVE Programme[10] - A Learning Initiative and the Volunteering Experience - was established in 2003 by the National University of Ireland, Galway to harness, acknowledge and support the contribution that its students make by volunteering. The programme draws on a strong tradition of student engagement both on and off campus and assists students who wish to actively volunteer while developing tangible and transferable skills alongside practical volunteering experiences. The University announced it would be withdrawing its support for the Students' Union run RAG week in 2009 after the arrests of over 40 students.[11] €32,000 was raised for charity by the week.