The Beaumont Commercial District is located in Downtown Beaumont, Texas. The district consists of various styles of buildings, including 6 highrises built before 1932. The district is registered on the NRHP as a U.S. Historic District. The historic district is roughly bounded by Willow, Neches, Gilbert and Main Streets.[1] The Old Spanish Trail (U.S. Route 90) travels through Downtown on Willow, Park, Pearl and College Streets.[2] 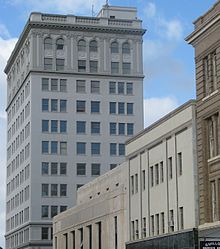