The KFC Yum! Center[6] is a US $238 million, 22,000-seat basketball and multipurpose arena that opened on October 10, 2010, on the Ohio River waterfront in Louisville, Kentucky, United States, on Main Street between Second and Third Streets.[7][8] The project is part of a $450 million project that includes a 975-car parking structure and floodwall. On April 19, 2010, it was announced that Yum! Brands would pay US $13.5 million for the naming rights[9] and would sell the products of three of its chains—KFC, Pizza Hut, and Taco Bell—in seven concession stands within the arena.[6]

The University of Louisville men's and women's basketball teams are the primary tenants of the arena complex.[7] The U of L women's volleyball team began using the arena as a part-time home in 2011.[10] It is the fifth largest college basketball arena in the nation and includes an integrated scoring and video display system, which includes large LED video displays within the seating bowl, professional grade LCD screens and a powerful control system, all provided by Daktronics of Brookings, South Dakota. [11] The arena's current attendance record is 22,803, set against Kentucky on Dec. 31, 2010.

Early arena planning focused on two potential arena sites: one owned by the Louisville Water Company bounded by Liberty Street, Muhammad Ali Blvd, Second and Third Streets, and one owned by Louisville Gas & Electric (LG&E) on the waterfront between Second and Main streets.[12] In March 2006, University of Louisville men's basketball coach Rick Pitino stated he would not coach in an arena built at the water company site.[13] This came at a time when the House budget committee earmarked funding for the arena only if it was built at the water company site. Others, including Papa John's Pizza founder John Schnatter, a major donor to the U of L athletic program, criticized the LG&E location due to its higher cost.

On March 10, 2006, Kentucky Governor Ernie Fletcher announced at a Louisville Arena Unity Rally that the location of the new arena would be at the LG&E site along the riverfront to maximize profits.[13] The unexpected visit was supported by Louisville Mayor Jerry Abramson.

One month later on April 23, 2007, the Louisville Arena Authority released the design for the interior.[8] The number of seats increased from the original 19,000 to 22,000; it would be divided up between 11,348 seats in the lower bowl, with the remainder on the upper tier. The seat width also increased from 19 to 20 inches. Also included in the release was a proposed sports bar that would be located on the main concourse; it would be open year-round and have views of the Ohio River. The number of suites would increase to 72 that would be located on two levels between the main and upper concourses; they would be twice as large as those in Freedom Hall. A public plaza and concourse along Main Street was also revealed.[8]

Prior to the release of the design, an arena report urged the facility to incorporate energy-saving elements into the construction.[14] Other recommendations included the avoidance of large, blank walls, the inclusion of public art, and the provision of year-round uses inside the building.

On May 21, 2007, the Louisville Arena Authority voted unanimously to remove a hotel from the arena project.[7] The 425-room hotel, which was envisioned as one way to pay off the project, was deleted because other revenues to cover the $252 million construction cost were projected to be higher than expected. The hotel would have also taken land away from a public plaza along Main Street. The Greater Louisville Hotel and Lodging Association also supported the measure, stating that downtown Louisville had enough projected rooms.[7] The arena hotel and a planned Westin Hotel at Louisville Museum Plaza would have added 675 rooms by 2010.

The hotel was expected to contribute $1.3 million in annual lease payments, but other sources of revenue will sufficiently cover the $573 million in total debt over 30 years on a $339 million bond issue for the arena. Originally, the Kentucky Finance Cabinet projected $211 million in new tax revenues in 2005.[7] A more recent and compressive survey was completed recently and the projected revenue increased to $265 million. The other sources of revenue to cover the deletion of the hotel include,[7]

The removal of the hotel would allow for a wider Main Street plaza and would allow for new features, such as a Washington Street entrance.[7] It would also allow for more design flexibility and would lend itself to host after-hour concerts and other events on the plaza. 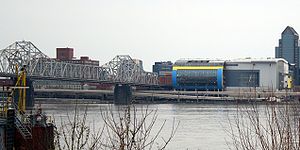 The arena seen from the Ohio River, with Clark Memorial Bridge to the left.

As a result of the subtracted hotel and the revised projected revenues, the arena, which would have lost $123,000 a year originally, might turn a small profit.[7] The arena would generate $9.2 million a year in rent, merchandise, concessions and other revenues, along with funds from a $2 ticket tax on every Louisville men's basketball game during the first 30 years of the arena's operation. The arena would spend just under $9 million a year, generating an annual profit of $196,000.

Another reason for the revised operating expenses is the reimbursement fee that the Louisville Arena Authority must pay to the Kentucky State Fair Board for the arena's impact on Freedom Hall.[7] The decrease in revenues, from $1.3 million to $738,000 during the first 10 years of operations of the new arena, is the result of a revision taking into account fewer events for the center.

On May 28, 2007, it was announced that the Louisville Metro Council will propose an arena-financing deal that would save city taxpayers $3.4 million/year, or $100 million over three decades.[15] The proposal, required the arena officials to exhaust other revenue sources, such as naming rights and luxury suite sales, before asking the metro government to pay more than its minimum pledge. The minimum pledge is $206 million towards the construction of the arena in annual installments between 2010 and 2039. Under the deal, the Louisville Arena Authority can ask the local government for up to $3.5 million more a year to cover the debt only if at least five other sources are drained. If the Louisville Arena Authority has to use additional city funds for two straight years, the Louisville Metro Council has the right to audit the arena's revenues.

The financing agreement allowed $339 million in bonds through the state of Kentucky's Economic Development Finance Authority to be issued to construct the $252 million arena.[15] The total debt on the bonds, $573 million over 30 years, will be paid through several sources. These include the city's $206 million commitment, $265 million from a tax-increment financing district, $179 million from advertising rights inside the arena, $63 million from luxury box sales, and at least $37 million in arena naming rights. The tax-increment financing district will allow part of the anticipated growth in state taxes to help pay for the arena. The arena's share of that revenue is capped at $265 million, although the project will be able to use the excess revenues to pay down the debt. It is expected to generate $574 million over 20 years.

In September 2008, financing was completed for the new waterfront arena.

The arena construction site in March 2010

On May 3, 2007, construction began on a new electrical substation for Downtown Louisville.[16] The previous substation, located on the block of River Road, Main, Second and Third Streets, was relocated across the street at Third and River Road. The new substation, projected to cost $63 million, was completed in October 2008, at which time the land that housed the old substation was transferred to the Louisville Arena Authority for construction of the new arena. Work started on the new arena in November 2008. The complex was officially completed on October 10, 2010.

In June 2010, Gov. Steve Beshear and Mayor Jerry Abramson announced a new $3 million streetscape improvement project directly underneath the Clark Memorial Bridge, a three-block area from Main Street to River Road, which will be transformed into a plaza. This includes a new decorative lighting system under the refurbished Clark Memorial Bridge, wide sidewalks, seats, new pedestrian and festival areas, and extensive plantings, making this an inviting promenade for the new KFC YUM! Center. The project will be completed in time for the October 2010 opening of the arena. [17]

In 2010, the glassed-in skywalk system, called Louie Link, was extended across Third Street from the new $16 million Skywalk Garage, an eight-level, 860-space parking facility on Third Street, to the new KFC Yum! Center.

The Task Force meetings were not without controversy. At first, task force member and University of Louisville athletics director Tom Jurich, along with University of Louisville president James Ramsey and Task Force member John Schnatter, were ardently opposed to a downtown site and supported instead a campus arena, or a new arena built near Freedom Hall at the Kentucky Exposition Center. Jurich and Ramsey would later support the waterfront site. Schnatter, joined by fellow task force member and Humana co-founder David Jones, strongly supported a new arena at the water company site, located four blocks down 2nd Street, or the Exposition Center, which was the cheapest option. They paid over $200,000 for a study that showed the water company site would be much less expensive than the riverfront site. However, the two dropped their lobbying effort after it did not seem to change the minds of the rest of the task force.[18]

In the final site recommendation vote, Schnatter was the only one to vote against the waterfront site.