Downton Abbey is a British television period drama series, produced by NBC Universal-owned British media company Carnival Films for the ITV network. The series is set during the late Edwardian era (after Edward VII's death) and the First World War on the fictional estate of Downton Abbey in Yorkshire, and features an ensemble cast. It was created and principally written by actor and writer Julian Fellowes, and premiered on ITV on 26 September 2010.

Reception of the programme was predominantly positive; ratings were extremely high for what is usually considered a 'genre' show, and the first series picked up a number of awards and nominations after its initial run. It has subsequently become the most successful British costume drama since the 1981 television serial version of Brideshead Revisited,[1] and in 2011 it entered the Guinness Book of World Records as the 'most critically acclaimed television show' for the year, becoming the first British show to win the accolade.[2]

On 3 November 2011, ITV confirmed that a third series has been commissioned and will be broadcast from September 2012.[3] 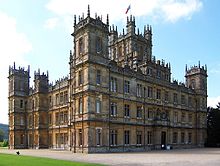 The series is set in the fictional Downton Abbey, the Yorkshire country house of the Earl and Countess of Grantham, and follows the lives of the aristocratic Crawley family and their servants early in the reign of George V. The first series spans the two years prior to the Great War, commencing with news of the sinking of the Titanic, an event that sets the story in motion. The second series covers the years 1916 to 1919.

Highclere Castle in Hampshire[4] was used for exterior shots of Downton Abbey as well as for the majority of the interior filming. The servants' living areas were constructed and filmed at Ealing Studios.[5]

The village of Bampton in Oxfordshire was used for filming the outdoor scenes, most notably St Mary's Church and the village library, which serves as the entrance to the cottage hospital.[6] The North Yorkshire towns of Malton, Thirsk, Easingwold, Kirkby, Kirkbymoorside, Middlesbrough, Ripon and Richmond have also been mentioned by characters in the series.

The first series cost an estimated £1 million per episode, and is the most successful British period drama since Brideshead Revisited, with British ratings exceeding 10 million viewers.[1] The series was also well received in the United States, averaging over 6 million viewers per episode.[7]

The first series started on 26 September 2010, and explored the lives of the Crawley family and their staff from the day after the sinking of the RMS Titanic in April 1912 to the outbreak of the First World War on 4 August 1914. Much of the focus is on the need for a male heir to the Grantham estate, and the troubled love life of Lady Mary as she attempts to find herself a suitable husband. The device that sets the drama in motion is the entail that accompanies the (fictional) Earldom of Grantham, which endows both title and estate exclusively to heirs male. This is complicated by the fact that the estate had been near financial ruin, and was only saved when the present Earl, then the heir apparent, contracted a wealthy marriage with an extremely rich American heiress. Upon marriage, her considerable fortune was contractually incorporated into the comital entail in perpetuity. The Earl, having had only three daughters and no son, had arranged for his elder daughter to marry her cousin, and son to the heir presumptive, thus keeping both title and estate within the immediate family. The demise of both heirs presumptive in the sinking of the Titanic destroys the family plans and brings a distant cousin, a young solicitor from Manchester, in line to inherit everything, including the personal wealth of the Countess, who will not be able to bequeath it to her daughters.

In 2010, Laura Mackie, ITV Director of Drama Commissioning, confirmed that the drama would return for a second series in 2011:

We're delighted with the audience response to Downton Abbey and the positive critical reaction. We're extremely proud to have commissioned a series which has clearly captivated ITV1 viewers. Consequently, we're thrilled to be announcing the recommission of a new series for 2011 which will allow us to spend more time with the Crawley family and their servants.[14]

The series comprises eight episodes, running from the Battle of the Somme in 1916 to the Armistice in 1918. Social equality, redemption and death are big themes of this season. Matthew Crawley, Thomas, and William Mason are off fighting in the war; Tom Branson, an Irishman, is unsure that he wants to fight for the British; and Lord Grantham cannot serve due to his age. Lady Sybil Crawley defies her aristocratic position and joins the Voluntary Aid Detachment.[18][19] Filming began in March 2011.[20]

It was confirmed at the preview of the second series, at Highclere Castle on 29 July 2011,[19] that Fellowes was working on a third series, set after the Armistice and during the 1920s.[19] Amy Nuttall will not return for the third series.[10]

ITV confirmed the commissioning of a third series on 3 November 2011. It will enter production in early 2012, and be broadcast from September 2012.[26]

The first episode of Downton Abbey had a consolidated audience of 9.2 million viewers, with a 32% audience share—making it the most successful new drama on any channel since Whitechapel was launched on ITV1 in February 2009. The total audience for the first episode, including repeats and ITV Player viewings, exceeded 11.6 million viewers. This was beaten by the next episode, with a total audience of 11.8 million viewers—including repeats and ITV Player views. Episode three had a 31% share of the viewing audience. The first series finale, along with The X Factor, broadcast on 7 November 2010 helped to achieve ITV1's best Sunday night ratings of 2010.[27] In the US, the series debuted to ratings of 6.7 million, doubling the 2011 season of Masterpiece Classic audience average.[28] Each episode of first season finished in the US with an estimated average of more than six million viewers[29] with a total of 13 million viewers for the first season.[30]

At Metacritic, which assigns a normalised rating out of 100 to reviews from mainstream critics, the first season received an average score of 92, based on 14 reviews, which indicates "universal acclaim".[31] This result earned the show a Guinness World Record in 2011 for ‘Highest critical review ratings for a TV show’, making Downton Abbey the most critically well-received TV show in the world.[32]

Sam Wollaston of The Guardian said,

It's beautifully made—handsome, artfully crafted and acted. Smith, who plays the formidable and disdainful Dowager Countess, has a lovely way of delivering words, always spaced to perfection. This is going to be a treat if you like a lavish period drama of a Sunday evening.[33]

Viewers were critical of the number of advertisement breaks during the first episode (seven in a 90-minute episode), claiming it ruined the continuity of the story. ITV responded by saying that the number of breaks shown complied with Ofcom regulations and that the advertising was necessary to cover the high costs of producing the drama.[34]

In September 2011, the show entered the Guinness Book of World Records as the 'most critically acclaimed television show' for the year, becoming the first British show to win the award. It beat American shows Mad Men and Modern Family to the title.[2]

Downton Abbey series is currently up for nominations at the 2012 National Television Awards for Best Drama, Drama Performance: Male for actors Brendan Coyle and Dan Stevens, and Drama Performance: Female for actresses Joanne Froggatt and Michelle Dockery. The awards nominations are voted by the public, the winners announced at the award show, which takes place on 25 January 2012.

Over 100 countries have acquired the rights to broadcast Downton Abbey.[40]

STV, which broadcasts ITV productions in Scotland, opted out of showing Downton Abbey, choosing instead to screen a brand-new six-part series of Taggart, following a long practice of opting out of Britain-wide ITV programmes.[59] This led to backlash from Scottish viewers, who were frustrated at not being able to watch the programme. Many viewers with satellite or cable television tuned into other regional stations of the ITV network, for example ITV1 London, with viewing figures showing this is also commonplace for other ITV programmes.[60] The series received its first Britain-wide broadcast when it was shown on ITV3 in February 2011.

STV announced in July 2011 that it will show the first and second series of Downton Abbey, as part of its autumn schedule.[61]

Phyllis Logan, who plays Mrs Hughes, said: "I'm delighted that STV is showing Downton Abbey in Scotland – it means my family and friends in Scotland will be able to watch it at the same time as the rest of the UK. This might push our viewing figures up even higher which can only be good." Iain Glen, who plays Sir Richard Carlisle, added: "I am not party to the original decision as to why STV didn't acquire the original series from ITV, but I am delighted the decision has been reversed and the people of Scotland will be able to see what all the fuss has been about."[62]

Internationally, the U.S. DVD release date was 11 January 2011, in New Zealand it was released on 22 June 2011 and in Australia on 4 August 2011. The release in Australia and New Zealand has an exclusive bonus disc in both the DVD and Blu-ray versions. It contains extras such as cast interviews, geography of Downton: upstairs and downstairs, a day in service and others.

On 16 September 2011, two days before the UK premiere of the second series, it was reported by Amazon.com that the first series of Downton Abbey had become the highest selling DVD Boxset on the online retailer's website of all time, surpassing popular American programmes such as The Sopranos, Friends and The Wire.[66]

A soundtrack, featuring music from the series and also new songs, was released by Decca in September 2011. Music by John Lunn and Don Black features, with vocals from Mary-Jess Leaverland and Alfie Boe.[67]

A book featuring a behind-the-scenes look at Downton Abbey was released on 15 September 2011. It was written by Jessica Fellowes (the niece of Julian Fellowes) and was published by HarperCollins.[67][68]