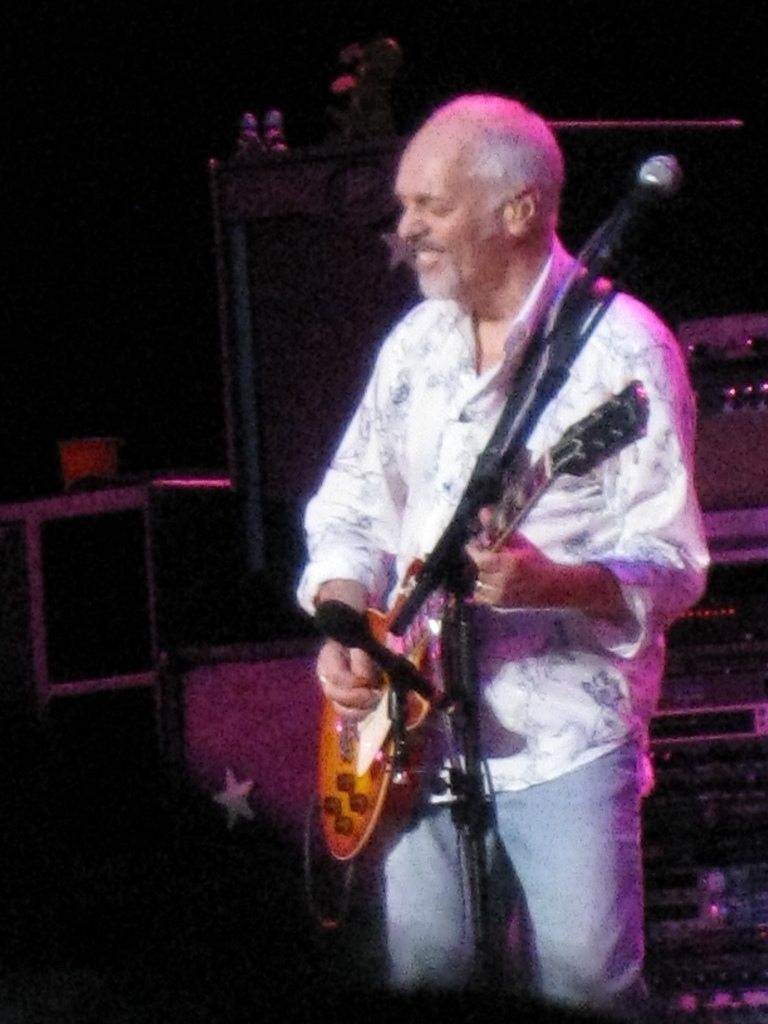 Peter Kenneth Frampton (born Fact|date=July 2008 in , ) is an English , best known today for his solo work in the mid-1970s and as one of the original members of the band . His solo album "" is one of the best selling s of all time.

Frampton first became interested in music when he was only seven years old. He discovered his grandmother's (a -shaped ) in the attic.

Early influences were & , (featuring guitarist ) and American rockers and , and then the and the . His father introduced him to Belgian gypsy guitarist .

By the age of ten, Frampton played in a band called The Little Ravens. Both he and were pupils at Technical School where Frampton's father, Owen Frampton, was an art teacher and head of the Art department. The Little Ravens played on the same bill at school as Bowie's band, George and the Dragons. Peter and David would spend time together at lunch breaks, playing Buddy Holly songs.

In 1966, he became a member of The Herd. He was the lead guitarist and singer, scoring a handful of British teenybopper hits. Frampton was named "The Face of 1968" by the UK press.

His debut was 1972's "Wind of Change", with guest artists and . This album was followed by "" in 1973, which featured Frampton working within a group project. In 1974, Frampton released "". Frampton toured extensively to support his solo career. In 1975, the "Frampton" album was released. The album went to #32 in the US charts, and is certified Gold by the .

Peter Frampton had minimal commercial success with his early albums. This changed with Frampton's breakthrough best-selling live album, "", in 1976. "" and "Show Me the Way" were singles. "", despite its length, was also popular. The latter two tracks also featured his use of the guitar effect. Recorded mainly in , where Humble Pie enjoyed a good following, at in 1975. Released in early January, it debuted on the charts on at number 191. It stayed at the top of the charts, at number one, for 10 weeks, in the Billboard's album chart for 55 weeks, and stayed on the charts in total for 97 Weeks. It was the top selling album of 1976, beating 's "Fleetwood Mac" for the top spot, and was the 14th best seller of 1977. The album became the biggest selling live album at the time of its release and sold over 6 million copies in the US, 16 million worldwide. It has since dropped to fourth all-time, after The album , which at 20 times platinum is the best selling live album of all time at present. is next at 13 times with and The come in next with at 7 times platinum. "Frampton Comes Alive!" is 6 times platinum. [ [http://www.riaa.com/goldandplatinumdata.php?resultpage=1&table=tblTop100&action= Top 100 Albums] - ] [ [http://www.legacyrecordings.com/Peter-Frampton.aspx# Peter Frampton] . - - a company] [ [http://www.mtv.com/music/artist/frampton_peter/artist.jhtml Peter Frampton] . - .com] [Bull, Roger. - [http://www.jacksonville.com/tu-online/stories/101306/lif_5535265.shtml "Peter Frampton: Still a guitar man"] . - "". - (c/o Jacksonville.com). - October 13, 2006]

The success of "Frampton Comes Alive!" put him on the cover of "", in a famous shirtless photo by . In late 1976, he and manager Dee Anthony visited the at the invitation of , the president's son. ["Random Notes". - "". - December 16, 1976. - RS228.] And the album put Frampton in a position to be offered, and then accept, a co-starring role with in director 's poorly received "Sgt. Pepper's Lonely Hearts Club Band". Frampton's career seemed to be falling as quickly as it had risen.

His following album, "" (1977) contained the hit title single and went platinum, but fell well short of expectations compared to "".

In June 1978, he was involved in a near fatal in the , he had multiple broken bones, sustained a concussion, and had muscle damage. Dealing with the pain of the accident would lead him into a brief problem of .

In 1979, Frampton returned to recording. Past band members included (bass), (keyboards/guitar/vocals), (drums), and John Siomos (drums/vocals). The album, "" (1979) was the first album recorded after his car accident.

In 1980, his following album "Rise Up" was released to promote his tour in Brazil. The album eventually turned into "", released the next year in 1981. These albums were the first he recorded almost completely live - their sound is believed to be the better for it".

Frampton continued to record throughout the 1980s, although his albums generally met with little commercial success. However, he did achieve a brief, moderate comeback of sorts in 1986 with the release of his "Premonition" album, and the single "Lying," which became a big hit on the charts. Most notably, he also united with old friend David Bowie, and both worked together to make albums. Frampton played on Bowie's 1987 album "" and the “Glass Spider” world tour to promote the album.

In the late 1990s, he starred in an infomercial plugging the internationally successful eMedia Guitar Method, a piece of instructional software represented as an alternative to taking actual guitar lessons. He claimed in the infomercial that the software was the best way to learn guitar.

In 1995, Frampton released "" which contained live versions of many of the songs from his 1980s and 1990s solo albums. Although there was a large amount of marketing for the album, it did not sell well. After "Frampton Comes Alive! II", he recorded and toured with and Ringo Starr's All-Starr Band.

In 2003, he released the album "Now", and embarked on a tour with Styx to support it. He also toured with . He appeared in 2006 on the , paired with of WWE fame. They were the first pair voted out.

On , , Frampton released his newest album, an instrumental work titled "Fingerprints". His band consists of drummer Shawn Fichter, guitarist , bassist (Frampton's life long best friend,), and keyboardist/guitarist Rob Arthur, and guest artists such as members of , , and his bassist on "", .

On , , "Fingerprints" was awarded the 2007 for Best Pop Instrumental Album. In February 2007, he also appeared on the Chicago based PBS television show Soundstage.

Frampton has been married three times. His wives have been: Mary Lovett (1971–1973); Barbara Gold (1983–1993), with whom he had two children, Jade and Julian; and Tina Elfers (, – present), with whom he has one child, named Mia Frampton. Jade Frampton earned a degree in fashion merchandising from in 2005. [ [http://www.fashionschool.kent.edu/alumni_list.htm Alumni List] . - Fashion School. - Kent State University]

Also in 2000, Frampton served as a for 's autobiographical film "". He also appears briefly in the film as 'Reg', a for Humble Pie, Frampton's real-life former band.

* Frampton's first appearance on television, was his role as an Australian coast watcher named Peter Buckley in the 1970s program "Baa Baa Black Sheep" Frampton supposedly offered to cut his long hair to appear in the episode, but the producers let him keep it under the storyline that his character would have been in the jungle for a long time anyway.Fact|date=May 2008
* Frampton appeared on an episode of "" in the 1970s, with as the week's co-host. was a guest, and noticing Frampton's open shirt, which exposed much of his bare chest, said, "Can we take up a collection to buy this young man some underwear?" Moore replied that Frampton had just sold millions of records, and said to Frampton, "We're taking up a collection to buy Tony Randall some underwear." Randall then objected to Frampton's smoking.Fact|date=May 2008
* Peter Frampton appears in the "" episode , in which he plays himself and is threatened by Death to come play for Lois and Peter.Fact|date=May 2008
* On December 20, 2006, Frampton appeared on "", filling in for in a guitar battle against .Fact|date=May 2008
* In November 2007, Frampton stars as himself in a "celebrity translator" commercial, where he "translated" an insurance customer's brief monologue using his trademark talk box. [ [http://www.adweek.com/aw/national/article_display.jsp?vnu_content_id=1003670661 "Geico's Translator's in Encore Performance"] . - "".]
* In 1996, Frampton guest-voiced on "" (episode: ), playing himself, and he's seen playing "Do You Feel Like We Do" after which he tries to shoot 's inflatable pig out in the air, but it's been wasted by Homer.Fact|date=May 2008
* In an episode of "The Drew Carey Show", Frampton performed the song "You Had To Be There".Fact|date=May 2008

* In the 1993 comedy "", Cassandra shows Wayne the "Frampton Comes Alive!" album and asks if he has ever seen it before, to which Wayne (Mike Myers) replies "Everybody in the world has Frampton Comes Alive! If you lived in the suburbs, you were issued it. It came in the mail with samples of Tide."Fact|date=May 2008
* once talked about smoking fake pot with Frampton in "" on his second CD "" saying "But I got to smoke fake pot with Peter Frampton. That's a cool story. It's as cool as smoking real pot with a guy who looks like Peter Frampton. I've done that way more."Fact|date=May 2008
* Billabong created a with Peter Frampton's likeness and the phrase "Baby, I love your waves" (similar to "Baby, I Love Your Way") on the back without permission, subsequently litigation was enacted. [ [http://www.smh.com.au/articles/2004/07/21/1090089197543.html "Frampton's fury at Billabong's ways"] . - "". - July 22, 2004]
* In an episode of "", after Peter Griffin steals a flu shot from an elderly woman, she calls him a monster, he replies "You know what was a monster? Frampton Comes Alive! 1976 Is there anyone you knew who didn't have that record?".Fact|date=May 2008
* In another episode of "" titled , Peter Griffin realizes that he has not appreciated his wife as much recently and asks Death to pay a visit to Peter Frampton. When Death arrives at Frampton's house to persuade him to visit the golf course, Frampton protests, saying that Death should be "at Keith Richards' house" (a joke Frampton himself pitched, according to the DVD commentary). Death also asks Frampton to bring "the thing that makes your guitar go ‘wah wah wah'" (referencing Frampton's famous use of a talk box to make his guitar "talk"). Lois Griffin discovers Peter Griffin at the golf course and prepares to confront him, but Frampton appears, playing "Baby, I Love Your Way", which is "their" song.
* On the "" episode "", Patchy the Pirate's cassette of "Frampton Comes Alive!" breaks while he waits in rush hour traffic.Fact|date=May 2008
* The song "Third Track Main Camera Four Minutes" (from the album "") contains the line: 'If ever there was an album title in dire need of an exclamation mark, it surely had to be... "Frampton Comes Alive!"