The Globemaster was developed after the Japanese attack on Pearl Harbor. The long distances across the Atlantic, and especially the Pacific Ocean to the combat areas indicated a need for a transoceanic heavy-lift military transport aircraft. Douglas Aircraft Company responded in 1942 with a giant four-engined design. Development and production modifications issues with the aircraft caused the first flight to be delayed until 5 September 1945, and production was limited to 14 aircraft after the production contract was canceled after V-J Day.[1]

Although not produced in large numbers, the C-74 did fill the need for a long-range strategic airlifter, in which the subsequent Douglas C-124 Globemaster II was used by the Air Force for many years.

A contract worth more than $50 million was signed 25 June 1942, for 50 aircraft and one static test article. There were no XC- or YC-74 models produced.

The Douglas Aircraft Company began studies at their Santa Monica division towards developing a transport capable of fulfilling the needs of the U.S. military. The 'C-74 Project Group' used their company's DC-4 as a basis and concentrated on extending its capabilities. This new model number aircraft became the Douglas Model 415. Their design philosophy was to build a "no-frills" aircraft that was able to accommodate much of the Army's large equipment. This included tanks, 105 mm Howitzers with transporting vehicles, angle bulldozers, and smaller utility vehicles like jeeps.[2]

This first flight of a C-74 occurred on 5 September 1945. The first C-74, 42-65402, was airborne just two months after it rolled off the assembly line. At the time of its first flight, the C-74 was the largest landplane to enter production, with a maximum weight of 172,000 lb (78,000 kg). It was able to carry 125 soldiers or 48,150 lb (21,840 kg) of cargo over a range of 3,400 mi (5,500 km). Perhaps the most notable feature of the C-74 was its cockpit arrangement with separate canopies over the pilot and copilot; the same arrangement was used for the Northrop XB-42 Mixmaster. This arrangement was unpopular with flight crews, however, and the aircraft were retrofitted with a more conventional arrangement. During the life of the aircraft, the radial engines were also upgraded to 3,250 hp (2,424 kW) Pratt & Whitney R-4360-49 engines. The aircraft was 31 feet longer than the C-54 Skymaster, and would be 24 feet longer than the proposed C-118 Liftmaster.[2]

The second built, 42-65403, c/n 13914, crashed during flight testing on 5 August 1946 at Torrance, California when it lost a wing during an overload dive test. All four crew bailed out successfully.[3]. The fourth aircraft was diverted to a static test article at Wright Field, Ohio and virtually every component was tested to destruction between August 1946 and November 1948. This was done in order to determine the individual components' ability to withstand design loads. The fifth C-74 built was modified to be a prototype for the Douglas C-124 Globemaster II, which used the same wing as the C-74, but used a much larger fuselage. This newer aircraft quickly superseded the C-74 in service.[2]

Douglas had every intention to adapt the aircraft into a civil airliner once the war ended. Pan American World Airways began negotiations in 1944. Their civilian model would be dubbed a DC-7 by Douglas (Model 415A) and the 'Clipper Type 9' by Pan American. Pan American intended to use the 108-passenger aircraft for international travel between New York, Rio de Janeiro, and other cities. The major difference between the military cargo aircraft and the civil airliner was the non-pressurized fuselage of the military C-74 and the pressurized DC-7. The passenger compartment was to be outfitted with a lounge bar, dining area and sleeping cabins for night flights. In June 1945, an order was placed for 26 DC-7 aircraft.[2]

With the need for military aircraft greatly reduced by the end of World War II, the order for 50 military aircraft was canceled in January 1946 after production of only 14 aircraft. Only construction numbers 13913/133926 (AAF serials 42-65402/65415) were built. Construction numbers 13927/13962 (AAF serials 42-65416/65451) were canceled. This cancellation also ended plans to build an airliner version of the C-74 for the civilian market, as the limited military production run increased the cost per civilian aircraft to over $1,412,000 and Pan American canceled its order. Douglas then canceled the DC-7 designation. The DC-7 designation was later used for a completely different civilian airliner project in the early 1950s, having no relationship to the C-74.[2][4] 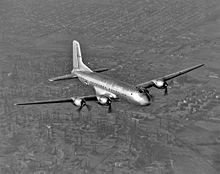 The C-74 had a crew of five, including copilot, pilot, radio operator, navigator, and flight engineer. Crew rest quarters were included for long-duration missions. Passageways were provided in the wing to permit the flight engineer to perform servicing and repairs while in flight. It could carry 125 fully equipped troops, 115 litter patients with their medical attendants, or up to 50,000 pounds (22,000 kilograms) of cargo. The cargo bay had twin hoists that could be moved on a rail up and down the bay. They could be used to drop a removable belly section to ease loading of cargoes, reducing the need for specialized cargo handling equipment.[2]

The small numbers of C-74s built meant that the aircraft's service was limited, but it gave the Air Force experience with the operation and usefulness of large transport aircraft.

The "C-74 squadron" was activated along with the "C-74 Project" on 5 September 1946. They were attached to the 554th AAF Base Unit located at Memphis Municipal Airport, Tennessee. The 554th was a part of the USAAF Air Transport Command. The C-74 Squadron's mission was:[2]

This project was designed to be a "shakedown" of the aircraft prior to entering operational service. Training of personnel to conduct this test was to have been accomplished by aircrews and technicians initially C-74 trained at Wright Field, Ohio, and also at the Douglas facility in Long Beach, California. Approximately 30 transcontinental flights were planned.[2]

The squadron was moved to Morrison Field, Florida in October 1946. This was due to the fact that the runways at Memphis were not stressed to take the large gross weight of the C-74, resulting in some minor cracking to the concrete surface. Operations included two weekly trips from Morrison Field to Albrook Field, Panama using Río Hato Army Air Base as an alternate field.[5]

In 1947, the 2nd and 3rd Air Transport Groups (Provisional) were formed and the C-74 was declared operationally ready. Humanitarian missions were flown in 1947 that included flood relief to Florida, and Hurricane relief for the southern area of the U.S.[2]

Once in operational use, C-74s began to be used on scheduled MATS overseas routes though the late 1940s and mid 1950s:[6]

Additionally, logistic support flights for Strategic Air Command (SAC), and Tactical Air Command (TAC) saw the Globemaster in North Africa, the Middle East, Europe, the Caribbean, and within the United States. Two C-74s were used to support the first TAC Republic F-84 Thunderjet flight across the Pacific Ocean to Japan. SAC also continued to use the Globemasters to rotate Boeing B-47 Stratojet Medium Bombardment Groups on temporary duty in England and Morocco as part of their REFLEX operation.[2]

During the Berlin Airlift, a single Globemaster (42-65414)[4] arrived at Rhein-Main Air Base on 14 August 1948 and landed for the first time on 17 August at Berlin's Gatow Airfield in the British sector carrying 20 tons of flour. Over the next six weeks, the Globemaster crew flew 24 missions into the city delivering 1,234,000 pounds of supplies. Several airlift records were set by the crew in 414 during Operation Vittles. On 18 September, Air Force Day, the crew flew six round trips into Berlin hauling a total of 250,000 pounds of coal setting a new Airlift Task Force utilization record by flying 20 hours during the 24 hour effort.[5][7]

During the construction of Tegel Airfield in the French sector of Berlin, large construction equipment was needed to build new runways. But this equipment, including a rock crusher, was too big for even the Globemaster to accommodate. The mission was accomplished by having the equipment cut into pieces by welding torch at Rhein-Main and flown aboard the C-74 into Gatow for reassembly.[5]

After six weeks of Vittles flights, the Globemaster returned to Brookley AFB. Reportedly, the Soviet Union complained that the Globemaster could be used as a bomber via the open elevator well. The fact that the runways in Berlin were not stressed for the airlifter's weight and the aircraft was not compatible with the corridor's scheduling were other factors considered for its withdrawal.[5]

Support for the Berlin Airlift by the C-74 changed to flying regularly scheduled flights between the U.S. and Western Germany. This mission was called the 'Goliath' and was constantly transporting C-54 engines and parts for use in the airlift. Cargo arriving in Western Germany was flown to Berlin in smaller C-47 Skytrain and C-54 Skymaster aircraft.[5]

Experience with the Berlin Airlift demonstrated that the new United States Air Force needed a heavy strategic airlift capability, which led to the development of the Douglas C-124 Globemaster II.

The invasion of the Republic of Korea by North Korea began another supporting phase of the C-74's career. From 1 July 1 to December 1950, the Globemasters logged over 7,000 hours in flights to Hawaii hauling troops and high priority cargo westward toward the Korean War and returning eastward with wounded GIs.

During the seven months between July 1950 and January 1951, the Globemasters transported 2,486 patients, 550 passengers, and 128,000 pounds of cargo from Hickam AFB, Hawaii to the United States while hauling just under a million pounds of cargo westward. The C-74s did not fly into Japan, Okinawa or any South Korean airfields. These figures, coupled with the fact that, since 1946, the C-74 had flown over six million miles and 31,000 flying hours without a single injury to crewmen or passengers, give testimony to the Globemaster's reliability.[5]

By 1952, The C-74 began to experience shortages of spare parts and increasing maintenance problems. It was recognized by late 1954, that the deterioration of the C-74's components were progressing more rapidly than predicted. Plans were made for the eventual retirement of the Air Force's only fleet of Globemasters. In June 1955, the 6th ATS was merged with the 3rd ATS and was flying operational missions with them. On 1 July, the 6th ATS (Heavy) was officially deactivated and its C-74s and crews were transferred to the 1703rd ATG's 3rd ATS (Heavy). On 1 November 1952, the C-74s were placed in flyable storage at Brookley AFB while the group waited for instructions as to the disposition of the aircraft.[5]

During the first three months of 1956, the 11 remaining C-74s were officially removed from the Military Air Transport Service's inventory and were flown one by one to Davis-Monthan AFB, Arizona for long-term storage and disposition. Colonel George S. Cassady, who had accepted the first C-74 for the Air Force and now a Brigadier General, was attending a Continental Division Commander's Conference when he learned of the C-74's last flight. Cassady received special permission to pilot the aircraft on its last flight and on 31 March 31 1956, flew the last C-74 from Brookley AFB to Davis-Monthan AFB.[5]

Most of the C-74s in storage at Davis-Monthan AFB were scrapped in 1965, although four wound up in civilian hands, mostly owned by Aeronaves de Panama (holding company for "Air Systems"). The National Museum of the United States Air Force scrapped the last vestige of Air Force Globemaster Is when they relegated the YC-124C, 48-795 (the prototype of the Globemaster II which had been converted from C-74, 42-65406) to fire-fighting training in 1969.[4]