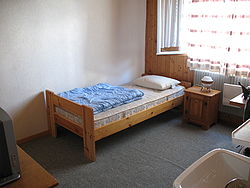 Bed size refers to the dimensions of a mattress and the names by which standard sizes are called. Beds themselves vary widely in size according to the degree of ornamentation but are sold according to the size of mattress they take. The dimensions and names vary considerably around the world, with most countries having their own standards and terminology.

Modern sizes in metric system countries are 200 centimetres (79 in) long: domestic double beds are either 140 centimetres (55 in) or 160 centimetres (63 in) wide. The traditional double size standard among English speaking countries, based on the imperial measurement is 4'6" by 6'3" (54 by 75 inches (137 by 191 cm)) but the sizes for other bed types tend to vary.

Standard sizes in the United States and Canada 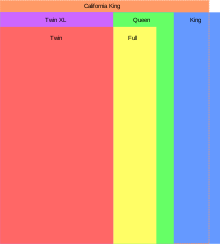 Modern manufacturing conventions have resulted in a limited number of standard sizes of commercial bedding for mattresses and box springs. Imported beds vary by country of origin as per the table above.

These dimensions are for the mattress—the actual bed frame will be a little larger in order to fully encompass and support the mattress. The thickness of the mattress may vary considerably.

A king-sized bed may have a king-sized box spring (bed base), or two smaller box-springs under a king-sized mattress. It is a common misconception that on a North American standard or eastern king, the (two) box springs are (each) identical in size to a twin extra-long. However, two twin extra-long mattresses next to each other add up to 78 inches (200 cm) wide instead of the 76-inch (190 cm) width that is standard for an eastern king.

In Mexico, the length of older beds is sometimes 1.9 metres instead of 2.[citation needed]

Most modern beds/mattresses sold in the UK and Ireland are constructed using imperial dimensions[3] but are sometimes sold in their (very) approximate metric equivalents.[5]

Mainland European basic sizes [see next] are sold in the UK, notably from IKEA: these are sometimes known as "IKEA size beds".[6]

Modern mainland Europe practice is to refer to a bed by explicit width or size ("80 cm bed" or "80 × 200 cm bed").[citation needed] In France and Spain, the length of older beds is sometimes 190 centimetres instead of 200.[citation needed]. Other sizes found include:

In Italy, beds are classified by width. Sizes often used are:

Most mattress sizes in the Netherlands are also available in extra long, meaning 220 cm instead of 200 cm.

In the Scandinavian countries, standards vary from one country to another. In Norway, these sizes are used:

Beds/mattresses are often available also in extra long 220 cm (87 in) length. To cover the California king size mattress, waterbeds are also sold in Europe with size of 180 cm × 210 cm. Some older beds are only 190 cm (75 in) long, while antique beds often are even shorter (since they in older times often slept in a reclined position rather than the close to supine position which is common today[citation needed], and also, on average, people are taller now than they used to be).

The following bed sizes are available in New Zealand: