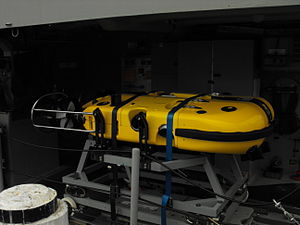 The Double Eagle is a remotely operated vehicle (ROV) built by the Swedish defence company Saab Underwater Systems AB and used for the disposal of naval mines.[1]

The ROV's payload can consist of scanning sonar, echo sounders, doppler logs, or self-navigation systems.[2] All Double Eagles are equipped with a extendable manipulator arm, which is commonly used to place a small explosive charge on a mine.[1] The ROV can be modified to double as a self-propelled variable depth sonar: the Mark II Double Eagles fitted to the French Navy's Tripartite class minehunters have been altered to carry a Thales TSM 2022 sonar, while a similar upgrade is to occur to the Mark III units being acquired for the Tripartites of the Royal Netherlands Navy.[2]