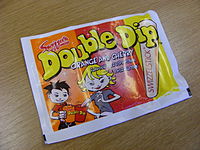 Double Dip is a confectionery produced by Swizzels Matlow, where it has been popular in the United Kingdom and Australia for at least 30 years. In 1989 Double Dip hit its peak of popularity when the sherbet based confection became the best selling sweet in Ireland. It consists of a sachet of two sherbet powders (orange and cherry flavoured), with a lollipop for dipping. Since it was released, there has been a new flavour that has been added. The flavour coke started off as a one off in a few packets, and then a special edition, and has since then become a normal sachet in the packets. The Swizzel Stick that you can gather the sherbet has been described as one of the "best" sherbet sticks around by many critics of confectionery.[citation needed]