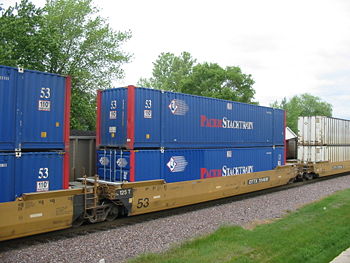 A double-stack car owned by the TTX Company. The 53 ft (16.15 m) capacity car is a Gunderson Maxi-IV. The containers are owned by Pacer Stacktrain.

A well car, also known as a double-stack car or stack car, is a type of railroad car specially designed to carry intermodal containers (shipping containers) used in intermodal freight transport. The "well" is a depressed section which sits close to the rails between the wheel trucks of the car, allowing a container to be carried lower than on a traditional flatcar. This makes it possible to carry a stack of two containers per unit on railway lines (double-stack rail transport) wherever the loading gauge assures sufficient clearance. The top container is held in place either by a bulkhead built into the car, or through the use of inter-box connectors.

Advantages to using well cars include increased stability due to the lower center of gravity of the load, lower tare weight, and in the case of articulated units, reduced slack action.

Double-stack cars are most common in North America where intermodal traffic is heavy and electrification is less widespread; thus overhead clearances are typically more manageable.

Southern Pacific Railroad (SP), along with Malcom McLean, came up with the idea of the first double-stack intermodal car in 1977.[1][2] SP then designed the first car with ACF Industries that same year.[3][4] At first it was slow to become an industry standard, then in 1984 American President Lines, started working with the SP and that same year, the first all "double stack" train left Los Angeles, California for South Kearny, New Jersey, under the name of "Stacktrain" rail service. Along the way the train transferred from the SP to Conrail. 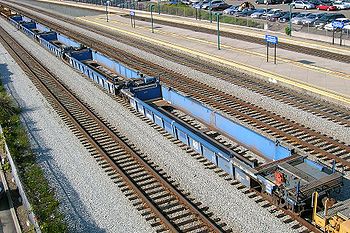 A multi-unit articulated double-stack car, with five 48 ft (14.63 m) wells. This one was built by Thrall and is owned by Pacer Stacktrain. Note that there is no bottom, which would make it unsuitable to carry road trailers.

Each unit of a double-stack car is constructed with a single well, but are often constructed with multiple units of three to five units, connected by articulated connectors. Articulated connectors are supported by the centerplate of a single truck, (often a 125-short-ton/111.6-long-ton; 113.4-tonne capacity truck but sometimes a 150-short-ton / 133.9-long-ton; 136.1 t capacity one).

Also, in a number of cases, multiple single-well cars (usually 3 or 5) are connected by drawbars and share a single reporting mark.

In cases where wells are smaller than some of the containers being loaded, larger containers are often placed on top of smaller containers that fit in the available wells. Many wells are also capable of carrying two 20 ft ISO containers in the bottom position.[5]

Some double-stack cars have been also equipped with hitches which allow them to carry semi-trailers as well as containers. These are known as "all-purpose" well cars.

A P&O Nedlloyd intermodal freight well car at Banbury station in the year 2001.

Low bridges and narrow tunnels in various locations prevent the operation of double-stack trains until costly upgrades are made. Some Class I railroad companies in the U.S. have recently initiated improvement programs to remove obstructions to double-stack trains. See Heartland Corridor (Norfolk Southern Railway) and National Gateway (CSX Transportation).