A new terminal was officially opened in 2006 and it accommodates a maximum of 1.6 million passengers per year.[2] 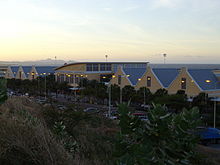 The New Curaçao terminal at dusk.

Located at the west side of Hato Airport there is a small hangar for the 2 Dash-8 patrol aircraft of the Coast Guard Netherlands Antilles & Aruba. This was until 2007 a naval airbase of the Royal Netherlands Navy who operated the base for 55 years. With a wide variety of aircraft in the past years Fireflies, Avengers, Trackers, Neptunes, Fokker F-27's, PC-3 Orions, Fokker F-60's and several helicopters. After the political decision to sell all Orions the airbase wasn't needed anymore.