Synanceia is a genus of fish of the family Synanceiidae, the Stonefishes, whose members are venomous, dangerous, and even fatal to humans. It is the most venomous fish in the world.[1] They are found in the coastal regions of Indo-Pacific oceans.

Synanceia are primarily marine, though some species are known to live in rivers. Its species have potent neurotoxins secreted from glands at the base of their needle-like dorsal fin spines which stick up when disturbed or threatened.[2] The vernacular name of the species, the stonefish, derives from being able to camouflage and transform itself to a grey and mottled color similar to the color of a stone.[3] Divers have sometimes stepped on them, thinking they are stones.

The type species of the genus is Synanceia verrucosa, and it includes the species Synanceia horrida that Linnaeus described as Scorpaena. The authors of Synanceia are Marcus Elieser Bloch and Johann Gottlob Schneider in the latters republication of Systema Ichthyologiae iconibus cx illustratum (Illustrated catalog of Fishes), in 1801. The description was accompanied by an illustration by J. F. Hennig. The misspelling Synanceja is regarded as a synonym for this genus.

The following is a list of species in the genus:[4] 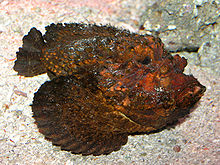 Synanceia verrucosa in a public aquarium

There have been unproven reports of osteo-arthritic sufferers experiencing improved mobility and reduction in joint pain following envenomation episode. The responsible agent has not been identified.

The pain is said to be so severe that the victims of its sting want the affected limb to be amputated.

Recommended treatments include the application of heat to the affected area and antivenom. Using hot water at a temperature no lower than 45 °C (113 °F), applied to the injured area has been found to destroy stonefish venom, and causes minimal discomfort to the victim. For more extreme cases, antivenom is to be used.[5]