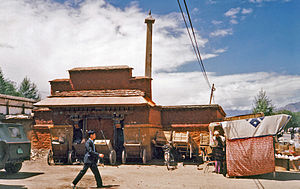 The graceful stone pillar, the Lhasa Zhöl rdo-rings or Lhasa Zhol Pillar, also known as the Doring Chima,[1] stood in the village of Shöl or Zhöl below the Potala Palace, in Lhasa, Tibet, dates as far back as circa 764 CE, "or only a little later,"[2] and is inscribed with what may be the oldest known example of Tibetan writing.[3]

The creation of the Tibetan script is traditionally attributed to Thonmi Sambhota who is said to have been sent to India early in the reign of Songsten Gampo where he devised an alphabet suitable for the Tibetan language by adapting elements of Indian scripts.[4]

The pillar was erected during the reign of the early Tibetan emperor, Trisong Detsen (755 until 797 or 804 CE) in the village of Zhol (which has disappeared because of recent construction), which stood just before the Potala Palace. It was commissioned by the powerful minister Ngam-lam sTag-sgra Klu-kong, generally considered an opponent of Buddhism.

The inscription starts off by announcing that Ngam-lam sTag-sgra Klu-gong had been appointed Great Inner Minister and Great Yo-gal 'chos-pa (a title difficult to translate). It goes on to say that Klu-khong brought to Trisong Detsen the facts of the murder of his father, Me Agtsom (704-754) by two of his Great Ministers, 'Bal Ldong-tsab and LangMyes-zigs, and that they intended to harm him also. They were then condemned and Klu-kong was appointed Inner Minister of the Royal Council.[5]

It then gives an account of his services to the king including campaigns against China which culminated in the brief capture of the Chinese capital Chang'an (modern Xian) in 763 CE[6] during which the Tibetans temporarily installed as Emperor a relative of Princess Jincheng Gongzhu (Kim-sheng Kong co), the Chinese wife of Trisong Detsen's father, Me Agtsom.[7][8]

It is a testament to the generally tolerant attitude of Tibetan culture that this proud memorial by a subject was allowed to stand after the re-establishment of Buddhism under Trisong Detsen and has survived until modern times.[6]

Other information about the pillar

Traditionally among the celebrations for Tibetan New Year, or Losar, a team of sportsmen, usually from Shigatse, would perform daredevil feats such as sliding down a rope from the top of the highest roof of the Potala, to the Zhol Pillar at the foot of the hill. However, the 13th Dalai Lama banned this performance because it was dangerous and sometimes even fatal.[9]

As of 1993 the pillar was fenced off so it could not be approached closely (see accompanying photo).