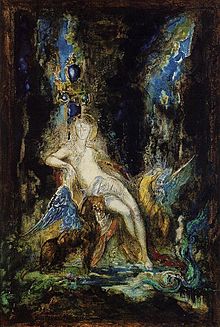 Dora van Gelder draws attention in her works for the existence of powerful beings called Devas which transmit and direct energy to the nature.[1] “Fairy and Griffon” by Gustave Moreau, 19th century.

Dora van Gelder Kunz (April 28, 1904 – August 25, 1999) was an American writer, psychic, alternative healer,[2] occultist and leader in the Theosophical Society in America.[3] As writer Kunz has titles published around the world in Dutch, English, French, German, Polish, Portuguese and Spanish.

Dora van Gelder was born at a Dutch camp called Tjeweng[4] located about five kilometers south of Djombang city situated in the Dutch East Indies, which at that time was a Dutch colony and today is known as Java.[5] There she was raised at her father’s estate, a sugar cane plantation. Since she was a child, she claimed, she interacted with ethereal beings without knowing that clairvoyant ability was unusual. At eleven years old she moved to Mosman, a suburb of Sydney (Australia),[6] to study with someone knowledgeable about her abilities, the then-Anglican clergyman and psychic C. W. Leadbeater, who instructed her in the refining of her psychic skills.[3][7]

Through Leadbeater she met Fritz Kunz, who used to accompany Leadbeater on his travels. In 1927, at the age of twenty-two, Gelder and Kunz married and moved to the United States where her American husband became the principal of a scholastic foundation and she became president of a corporation related to pedagogic supplies.[3] Soon after coming to the USA, the couple founded the first theosophical camp at Orcas Island in the state of Washington.[7]

The Manor, a training center rented by Theosophical Society in Mosman, Sydney where Dora Kunz stayed for awhile.[8]

For many years, Dora dealt with new methods in healing, particularly therapeutic touch,[9] which she co-developed in 1972 with Dr. Dolores Krieger,[10] a nursing professor at New York University,[11] which is said to promote healing, relaxation and lessen pain.[12][3] Therapeutic touch, stated Kunz, has its origin from ancient Yogic texts written in Sanskrit, which describe it as a pranic healing method.[2] As a result of that enterprise the technique is taught in approximately eighty colleges and universities in the U.S., and in more than seventy countries.[2]

Kunz philanthropically directed her clairvoyance towards helping physicians in complicated medical cases[13], in particular aiding in the diagnoses through her supposed capability of seeing the effects of diseases in the aura of the patients. More specifically she reported the existence of centers of energy in human body, also known as chakras, changing their colors according to diseases that affect matching endocrine glands.[14] She is said to have been able to predict some illness as many as eighteen months before symptoms manifest themselves.[7]

In 1975 Kunz became president of the Theosophical Society in America. In 1977 she published a manuscript about her fairies experiences in her youth, “The Real World of Fairies”. She stated that, during her life, she had always kept the communication with nature spirits.[1][3] According to her, in 1979 she saw fairies in Central Park, New York but due to the increasing pollution, it was more difficult to encounter them.[15] Kunz claims that devas are intimately connected with a vital energy, transmitting force to preserve and heal the Earth. She said as long as more people get involved with environmental causes, better are the chances of communication between humans and devas.[1] In 1987 after completing twelve years as president of the Theosophical Society in America, Kunz retired from the presidency and thereafter devoted herself mostly to lecturing and writing books.[3][7]

At nineteen twenties walking in Mosman’s shores Dora Kunz says have met a friend nature spirit worried with evil entities who had invaded the local, then she managed for expelling the monsters. “Mosman's Bay” by Arthur Streeton, 1914.[6]