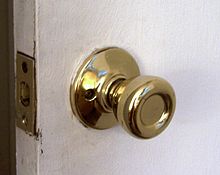 A door handle is an attached mechanism used to open or close a door.[1] In the United States, door handle can refer to any fixed or lever-operated door latch device, including on car doors. The term door knob (or simply doorknob) tends to refer to round operating mechanisms.

The first documented invention of the door handle appears in U.S. Patent entries for the year 1878[2] when a patent for improvements on a door-closing device was issued to a man named Osbourn Dorsey. However, the use of doorknobs, as documented by illustrations and shop catalogues, extends back into the 18th century. 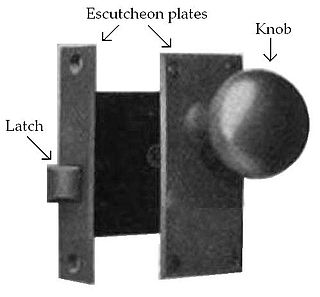 Parts of a basic door knob.

The traditional door knob has a bolt or spindle running through it that sits just above a cylinder, to which the spindle is connected. Turning the knob pulls the cylinder in the direction of the turn. The end of the cylinder is the latch bolt (more simply known as the latch), which protrudes into a space carved out of the door frame, and which prevents the door from being opened if the knob is not turned. A spring or similar mechanism causes the latch to return to its protruding state whenever the knob is not being turned. Escutcheon plates are typically placed around the knob and the place from which the latch protrudes.

In Europe door levers are more common than the door knob, while in the US, door knobs are traditionally preferred over door handles.[citation needed] However door knobs can be difficult for the young and elderly to operate. For this reason, door handles in most American commercial and industrial buildings and in many households use a lever-operated handle, rather than a knob, as the lever does not require a tight grip. Levers are also beneficial on doors with narrow stile widths where the reduced backset leaves insufficient space to comfortably turn a door handle.

Most household door handles use a simple mechanism with a screw-style axle (called a spindle) that has at least one flat side, which is passed through the door jigger, leaving some length exposed on each side of the door to which the handles are attached. Some handles are attached on both sides by screwing or sliding them directly onto the spindle, and then securing one or more retaining screws (set screws) through the knob perpendicular to the flat of the spindle. Handles that lose traction can frequently be repaired by replacing or adjusting the set screw, which prevents them from slipping on the spindle. Other types of handles, typically used in Europe, slide onto the spindle but are affixed only to the door itself without use of set screws.

On a balcony whose door has an outside shutter, a special door handle is used on the outer side. The protruding part of such handle (usually ring-shaped) can be folded sideways, so that the shutter can be fully closed without being obstructed by the door handle.

Of concern is the fact that door handles are instrumental in the spread of many infections.[3] However, some materials, e.g. brass, copper and silver, are slowly poisonous to many germs. The exact mechanism is not known, but is commonly thought to be via the oligodynamic effect, perhaps by some other electrostatic effect.[4] Brass and copper, for example, disinfect themselves of many germs within eight hours.[5] Other materials such as glass, porcelain, stainless steel and aluminium do not have this effect. Self-disinfecting door handles are particularly important in hospitals, but useful in any building.