A depiction of Boniface destroying Thor's oak from The Little Lives of the Saints (1904), illustrated by Charles Robinson.

The Donar Oak (also Thor's Oak) was a legendary oak tree sacred to the Germanic tribe of the Chatti, ancestors of the Hessians, and an important sacred site of the pagan Germanic peoples.

While many oak trees have been referred to as "Donar Oaks", the most meaningful of them is the oak chopped down by Saint Boniface in the early eighth century. According to the saint's hagiography the tree stood at a location near the village of Geismar (today part of the town of Fritzlar) in northern Hesse, and was the main point of veneration of the Germanic deity known as Donar (High German: Donner = "thunder") among the West Germanic Chatti and other tribes and as Thor among northern Germanics. Its destruction in 723 symbolizes the beginning of the Christianization of the non-Frankish tribes of northern Germany.

The oak tree in Germany has a long and sacred history, which has endured into modern times. The oak was already associated with Zeus in the classical period, and was particularly strong among Germanic peoples.[1]

In Germany, the oak tree stood for traditional values such as truth, longevity, and loyalty, and in the eighteenth and nineteenth centuries it came to symbolize Germany itself; Friedrich Gottlieb Klopstock hailed it as a national symbol, and he associated it with Arminius in his Hermanns Schlacht. Ein Bardiet für die Schaubühne (1769), a historic epic celebrating the first-century military leader who became an emblem of German unity.[2]

Boniface and the Donar Oak 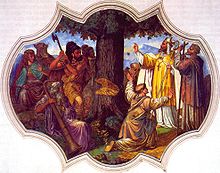 Boniface overseeing the felling of Thor's Oak. Painting dating from 1737 is located in the St.Martinskirche of Westenhofen in Schliersee.

In 723, the Anglo-Saxon missionary Saint Boniface, Apostle of the Germans, arrived in the area in his quest to convert the northern Germanic tribes to Christianity, using as his base the Frankish fortified settlement of Büraburg on the opposite side of the Eder river. He had just been in contact with Charles Martel, who had confirmed Frankish commitment to the mission in Thuringia and Hesse. With the military support of the Frankish empire (there was a base in Büraburg-Fritzlar), Boniface, in what was probably a well-planned and advertised action, had the oak felled to convey the superiority of the Christian God over Donar and the native Germanic religion.[3] The account in the first hagiography of Boniface, by Willibald, relates that the huge oak was felled by a great gust of wind, "as if by miracle" with Boniface only making one swing of the axe. When Donar did not respond by hurling a lightning bolt at him, the assembled local people agreed to be baptized.[4]

In Bonifacian iconography, the act is one of the most important symbols for the saint, and many prayer cards illustrate him with an axe, sometimes with his foot on the tree stump;[5] the scene as it was depicted, in all its pathos, by Willibald was a great example for historical paintings of the nineteenth century.[3]

Boniface used the wood of the oak to build a chapel dedicated to Saint Peter in Fritzlar. From this chapel originated a Benedictine monastery.[3][6]