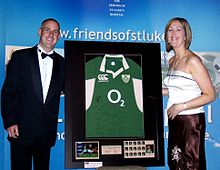 Donal Hughes with wife Deirdre and the €13,000 signed Ireland Rugby Shirt auctioned as part of the Round Ireland Golf Challenge

Dr. Donal Hughes is a well known Irish golf columnist. Although known in industry circles as leading food safety consultant and cleaning chemical manufacturer, Hughes turned a hobby as a humorous golf writer into a successful alternative career as the “SpinDoctor” with The Irish Examiner.

Born in 1974, Hughes grew up in Ballinrobe, County Mayo in the west of Ireland. He completed a degree in Applied Chemistry [1] in Dublin City University winning the AGB gold medal for highest final year exam results. He went on to be awarded a Ph.D. in 1999. Hughes returned to Mayo, was married to Deirdre and is now a father of four children.

Hughes early life was defined by sporting achievement; he represented Mayo in Gaelic football at all underage levels and achieved regional honours in squash, badminton and rugby. He received a DCU “Sportstar Of The Year” award in 1993 from the then Irish Minister for Sport, Liam Aylward. Following a career ending leg injury Hughes took up the sport of golf, progressing to become a three handicapper, which he retains today.

In 2007 Hughes devised and undertook a record breaking challenge for charity entitled The Round Ireland Golf Challenge.[2] Along with fellow golfer Michael Nolan, Hughes completed 32 rounds of golf, in each of Ireland’s 32 counties, over 32 consecutive days finishing on 6 September 2007 at The Heritage Golf Club. During the challenge, the pair walked every course and covered a driving distance of over 5,000 km. The achievement raised in the region €100,000 for children's and cancer charities in Ireland including Playing For Life, The Friends of St. Lukes, Barretstown Castle and The Jack and Jill Foundation. Hughes retains his charity involvement as a West Of Ireland envoy for an anonymous donor to rural and social development projects. 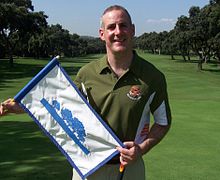 In preparation for his Round Ireland Golf Challenge, Donal Hughes came to the attention of the Irish golfing community and was commissioned by the Irish Examiner newspaper to write a log of his adventures. Following the project, Hughes was retained by the Irish Examiner’s sports editor Tony Leen to write a weekly golfing column in the paper. His humorous approach to golf writing lead to him becoming a reader favourite and in 2008 Hughes was promoted to a full page each Tuesday in the sports section of the paper with an average readership of 238,000.[3] Known as the “SpinDoctor”, Hughes’s page features columns such as:

On completion of his Ph.D. Hughes worked as a food industry technical manager before forming his own company, AbSolutions Food Safety[5] in 2001. AbSolutions Food Safety services range from consultancy to training, HACCP system development, cleaning chemicals, calibration, premises design and more. Hughes has created food safety systems for hundreds of Irish companies including Jacob Fruitfield and has worked as an independently contracted trainer for The Food Safety Authority of Ireland.