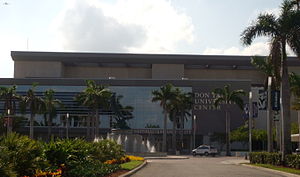 Exterior of The University Center

Nova Southeastern University’s 366,000 square-foot Don Taft University Center is a critical piece in the infrastructure of the university. It was constructed over a period of 2 years. The inaugural event hosted comedian Jamie Kennedy on August 23rd, 2006. It provides a focal point for campus life. It is a venue where NSU’s students, faculty and staff, as well as the community can enjoy guest speakers, concerts, sporting events, galas and other events.

The arena can be configured several ways depending on the event or sport. It can accommodated over 4,500 guests. The University Center can be converted to serve as a concert venue, convocation center, gathering area for university-wide activities, family entertainment events, and intercollegiate athletics. The facility is home to the NSUuniversity wide Sharks Men’s and Women’s Basketball and Women’s Volleyball Teams as well as the Athletic department. It provides locker rooms, equipment rooms and a team lounge, among other amenities. Modern sports medicine and athletic training facilities for NSU’s 250 student-athletes are equipped with high-tech modalities including ultrasound, electrical stimulation, diathermy, and a wide range of rehabilitation equipment, including the only HydroWorx Aquatic Therapy and Fitness Pool in the tri-county area. The University Center arena is being operated by leading facilities management firm, SMG Management Inc. The current nickname for the arena is "The Shark Tank" but name rights are available for a purchase price of $10 million.[1] 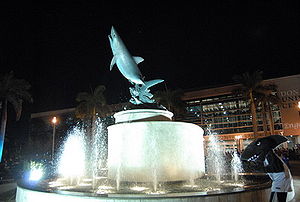 Shark Fountain outside the front of the UC Arena

The University Center RecPlex replaces the former one, which was a converted double-wide trailer. The RecPlex is a cornerstone for the campus recreation department. Membership at the RecPlex is provided free of charge to current students. Faculty, alumni, and the general public can join for varying costs. The new RexPlex contains:

The University Center houses the office of the Student Union. The Student Union exists to "enriches and supports the educational and socialization process of the University community". [2]The Student Union plans special events that occur both on and off campus. Off campus events include annual trips to the Florida Keys, Disney World, and local sporting events like Miami Dolphins games and Florida Panthers games.

The Flight Deck name originates from the fact that the land now occupied by NSU used to be the site of a Navy air base for World War II aircraft to practice taking off and landing on the short “Flight Deck” of US Naval carriers. It is also hard to miss the fact that NSU is directly under the flight path for Ft. Lauderdale International Airport. The Flight Deck includes a serving bar with a beer and wine license, low price snacks, pool tables, ping pong tables, large plasma TVs, and an area to play video games. The Flight Deck is host to a variety of weekly activities, student events, happy hours, and union sports. The Student Union sports program sponsors tournaments in 8-ball and 9-ball billiards, table tennis, darts, dominoes, spades, and a sports quiz bowl. The Flight Deck is also a place for many student organizations to host special events. Flight Deck is managed by the Student Union.

The University Arts Center, housed in the north wing of the facility, will officially open in January 2007. The facility includes, a 300-seat performance theater, a multipurpose black box theater with roll-out seating that matches the layout of the stage for the Miniaci Theater, a professional-caliber scene shop, and a gallery for the display of private art collections, photography and student artwork. Other amenities include choral and instrumental rehearsal rooms, six practice studios, and acoustic, percussion and keyboard technology labs.