Domundaejak (hangul: 도문대작; hanja: 屠門大嚼) is a book of food criticism written by Heo Gyun in 1611. It is included in the Seongseobubugo (hangul: 성서부부고; hanja: 惺所覆覆藁) (a collection of 26 books and 12 volumes). This book was written during Heo Gyun's exile. He was exiled to Hamyel (now Iksan), a seaside district in Jeollabuk-do. While eating the coarse food there, he started to describe the delicious food that he ate before. Domun (hangul: 도문; hanja: 屠門) means the door of the butcher's, and daejak (hangul: 대작; hanja: 大嚼) means chewing something loudly. So the title Domundaejak means licking one's lips by the butcher's door, thinking of the meat that one cannot now eat.

This book refers to 11 sorts of tteok, 30 types of fruit, 5 kinds of meat, 40 varieties of seafood, 25 sorts of vegetables and 5 other foods, for a total of 117 foods. It names those foods' ingredients' groups, names, specific localities of production, origins, bulk dates, production seasons, processing methods, shape, taste and so on. 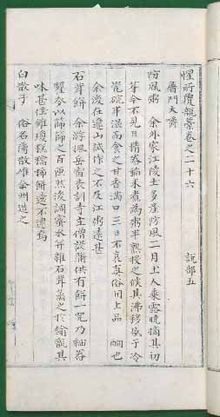 Domundaejak describes and comments on the best dishes from various regions and specialties from the eight provinces of Korea, and delicacies, vegetables, fruits and fish from various places in detail. These contents are divided largely into "Fruits," "Fish," and "Crops."

It records rare foods like bear's paw, the tail and tongue of deer, pheasant meat, placenta of leopard and where they are produced.

It records 40 varieties of seafood like carp, gray mullet, Chinese herring, sweetfish, cod, mackerel, ricefish, clams and crabs. It evaluates and records their taste and their production locales. (The list quoted in full:[1])

It records a total of 26 kinds of vegetables like ginger, mustard, and their areas of production.

It records yaksik (hangul: 약식; hanja: 藥食) which was the food that was given to crows on the 15th day of the Lunar New Year. Chinese people learned this recipe and they named it goyeoban.