Domino Records was the name of several United States record labels which are now defunct:

The first U.S. Domino Records, a United States based label, debuted in 1917 and went out of business later that same year. They produced 7-inch vertical-cut disc records. 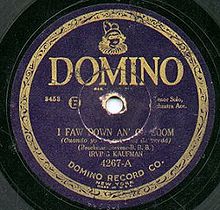 The second, better known, Domino Records, a United States based label, was in business from 1924 to 1931, producing standard 10-inch lateral cut 78s. The label was a subsidiary of Plaza Music Company, headquartered in New York City. The label later became owned by American Record Corporation.[2] Artists that they recorded included: Ben Pollack, as well as artists whose records were issued on other ARC labels.

In 1933, ARC reconstituted the Domino label - this time with the same label style, but in gold - for an exclusive 100 series sold only at the John Gabel Co. This lasted through about 1934.[3]

The third Domino Records was a regional label started in the late 1950s in Austin, Texas. This label lasted into the early part of the 1960s. Artists that they recorded included: George Underwood, Clarence Smith, Ray Campi, the Slades, and Joyce Harris.[1]