Dominicans in the United States

Dominicans in the United States 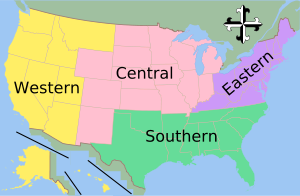 Map of the four Dominican provinces

The Eastern Province, or Province of Saint Joseph, now covers the northeastern United States (i.e. Kentucky, the original home of the Dominican Order in the United States, and the states to the north and east of eastern Kentucky).[2]

Provincials of the Province of St. Joseph

Communities and Apostolates of the Province

The Central Province, or Province of Saint Albert the Great was established in 1939,[4] and currently covers the states of Colorado, Illinois, Indiana, Iowa, Kansas, Michigan, Minnesota, Missouri, Nebraska, New Mexico, North and South Dakota, Wisconsin, and Wyoming, and serves six parishes and four campus ministries within this area. The headquarters is in Chicago.[5] There is construction/remodeling of the new Saint Dominic Priory in St. Louis, Missouri; the new Priory, which can house up to 50 friars, is the House of Studies for the Central and Southern Provinces.[6] As of June 2011, the Prior Provincial is the Very Rev. Charles Bouchard, O.P.

The Southern Province, or Province of Saint Martin de Porres, established in 1980, covers eleven states from North Carolina to Oklahoma and southwards, and is headquartered in Metairie, Louisiana.[7] 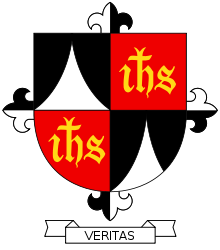 Coat of arms of the Western Province

The Western Province, or Province of the Most Holy Name of Jesus was first established in 1850 by the co-founders Fr. Sadoc Vilarrasa and Bishop Joseph Alemany. The province was soon reduced to a self-governing Congregation. Finally in 1912, the congregation was formally re-erected as a province,[8] and currently covers the states of Alaska, Arizona, California, Hawaii, Idaho, Montana, Nevada, Utah, Oregon, and Washington,[9] and serves eight parishes and ten campus ministries within this area.[10] It is headquartered in Oakland, California.[11] As of January 2011, the Prior Provincial is the Very Rev. Mark Padrez, OP.