The Yamaha Motif is a series of music workstations, first released by Yamaha Corporation in August 2001. Other workstations in the same class are the Korg Triton, Roland Fantom-G and Alesis Fusion. 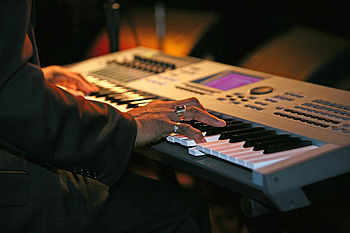 Motif Rack is a sound module without any keyboard, designed to be controlled by external instruments. It can be expanded with two Modular Synthesis Plug-in boards but has no sampling capabilities. Balanced hammer effect action is the same action found on Yamaha's S90 series keyboards. GHS (Graded Hammer Standard) action is the same action on Yamaha's high end digital pianos [1].

In January 2006, Yamaha launched two 'lite' versions of the Motif ES - the 61 key Mo6 and 88 key Mo8. Though only containing half the polyphony and fewer preset sound programs, these models contain all the Motif ES sample sets, along with arpeggios and a song and pattern sequencer. Lacking are the professional Motif ES features such as mLAN connectivity, PLG integration, sampling and multiple foot controllers.

The XS versions were announced at NAMM 2007:

Motif has a mLAn connection which can be used to transfer MIDI and video, sound to a pc

The OS of the Motif XS was revealed to be based on MontaVista Linux.[2]

The XF versions were announced via www.Motifator.com on August 2, 2010:

While the preset voices in the Motif XF are the same as in the previous XS model, the XF includes an extra user bank containing 128 brand new voices. Also, 8 new drum kits are also included in the user bank area.

Motif keyboards include three internal expansion slots (two on the rack-mount version). These slots allow one to significantly augment the instrument's soundset through the purchase of Yamaha PLG Expansion Boards--which are available in a variety of sonic flavours. One can also increase the amount of available sample RAM by up to 64MB with the purchase of third party memory sticks. External connectors include a firewire 400 port for connecting an mLAN network card; a USB 1 port for connecting the instrument to a computer via a MIDI cable OR for external storage; and a SmartMedia port for storing sequence, voice, and sample data (in which case the purchase of a third party SmartMedia card is necessary).

All Motif ES synthesizers feature a wide selection of high-quality sounds, and use a sample-based subtractive synthesis engine. The Motif ES6, ES7 and ES8 feature 16 track sequencers that can use MIDI and sample tracks, and 512MB of sample memory can be fitted for completely new sounds. Physical modelling, virtual analogue synthesis, FM synthesis plus a variety of additional sample sets can be installed with Yamaha's Moduler Plugin Synthesis System.

The Motif ES range employ the use of "Megavoice" technology from the Tyros; the flagship of Yamaha's performance keyboards. These high quality samples utilise 'velocity switching' to enable greater natural expression over the sounds, expressions such as fret noise, hammer-ons, slides and ghost notes.

Some improvements over the previous ES series are:

The main improvement over the Motif XS is the use of non-volatile flash memory for samples and sample libraries. Instead of DIMM memory modules, the XF uses proprietary flash cards. While more expensive than DIMM modules, the flash cards can permanently store sample data (volatile DIMM modules, used in all previous models, are unable to store data after being powered off.) This means that, once initially loaded, the sample data does not need to be reloaded every time the keyboard is powered on. The Motif XF is also the first in the Motif line to have standard internal SDRAM for sampling built into the keyboard.

It is valuable noting that Motifs XS and XF are no longer compatible with the PLG expansion cards.