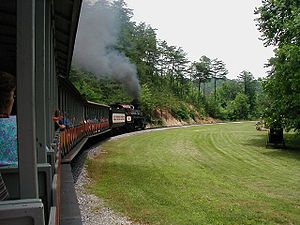 The Dollywood Express is one of the park's signature attractions.

The Dollywood Express is an attraction and heritage railway located at Dollywood in Pigeon Forge, Tennessee. It runs along a 2.5 mile loop-to-loop track from the Village to the top of the mountain Dollywood borders to the north. It is pulled by two ex-White Pass & Yukon Route 2-8-2 mikado steam locomotives, each burning five tons of coal each day. It is the oldest attraction in Dollywood, opening at the theme park "Rebel Railroad" in 1961. It is also one of the signature attractions at Dollywood, appearing in almost all advertising.

In 1957, North Carolina real-estate developer Grover Robbins opened a theme park between Boone and Blowing Rock called Tweetsie Railroad with ex-East Tennessee and Western North Carolina Railroad 4-6-0 #12. The park was an instant success. In 1961, he acquired two USATC S118 Class 2-8-2s from the White Pass. The success of Tweetsie prompted him to send one of them, 192, to the Smoky Mountains of East Tennessee for a second theme park, called Rebel Railroad. The other, 190, was sent to Tweetsie and still operates there.

In 1966, Robbins renamed the attraction Gold Rush Junction and a western-style "shootout" was added at the midway point in the ride, allowing the locomotive to stop and "cool its heels". In 1970 the Cleveland Browns football team bought the attraction, but the locomotive and cars retained their colors and text.

In 1976, Jack and Pete Herschend bought Gold Rush Junction, renaming it Silver Dollar City Tennessee, making it a sister park to its Branson, Missouri attraction Silver Dollar City. The ride was renamed again. This time, instead of a minor text change, 192 was given a complete new look. She was painted black instead of Tweetsie green. She was also fitted with balloon stacks to give her a more western look. In 1977, the ride acquired two new locomotives from the WP&YR, 70 and 71.

In 1986, Dolly Parton became part owner of the property, and the park was renamed Dollywood. The ride, to go with the new name, was renamed Dollywood Express. After the 2004 operating season, the park removed the balloon stacks, which were proving to be unpopular, and gave the locomotives a new coat of paint. Since the removal of the balloon stacks, the locomotive's paint schemes have been constantly changing.

Built by the Baldwin Locomotive Works of Philadelphia, Pennsylvania, this locomotive was the first 2-8-2 owned by the White Pass. It is one of Dollywood's most famous ride vehicles, and burns six tons of coal each day. She was built in 1938, and operated on the White Pass until 1963. She was sold to Silver Dollar City TN in 1977, and became known as Cinderella and was undergoing a rebuild and in 2010 went back in service.

Built by the Baldwin Locomotive Works of Philadelphia, Pennsylvania, this locomotive is the ride's least-known locomotive. She was built in 1939 and ran on the White Pass until 1963. She was sold along with 70 Silver Dollar City in 1977, and is sitting behind the backshop, her wheels and cab detached and on the ground nearby. She will not return to service in the near future.

Engine #72 was built by Baldwin in 1947 and operated on the White Pass until 1964. It was destroyed in a roundhouse fire in Sacagaway, Alaska in 1969. Everything besides the chassis was scrapped in 1974. The remains were sold to the Silver Dollar City in 1977 along with 70 and 71. Dollywood scrapped the chassis in 1999.

A 2-8-0 built for the Smoky Mountain Railroad, #107 is a standard-gauge locomotive, and thus has never run on the park's tracks. She has been on static display near the entrance of Dollywood since it opened as Rebel Railroad in 1961. She has been repainted many times to keep up with the ride's ever-changing paint schemes, and is currently wearing the pre-2004 Dollywood Express livery.

Built by Baldwin for the US military in 1943, 192 is slightly lighter than the other locomotives at Dollywood, being a USATC S118, and burns five tons of coal every day. The Army turned the locomotive over to the White Pass in 1946. She operated there until 1957. She was sold to the Rebel Railroad in 1960 and began operation there in 1961, and has worked there through the various ownerships and name changes the property has undergone, known as Klondike Katie. This has earned her the position as the Express's representative locomotive, occupying the official website's photo album, most T-shirts and merchandising, and even one of the lighted and animated signs inside the Dollywood Emporium.

Depending on the park's operating schedule, the general timetable for departing trains begin an hour and a half after opening, and the final run one hour before the park closes. The fireman will report to work about three hours before departure, and will begin inspections. The track is inspected each morning, and the locomotive is serviced by removing the stack gag, opening all operating valves to appliances to test their operation, as well as blowing down the sight glasses, cleaning the banked fire, cleaning the smokebox cinder bonnet, refilling lubricators, cleaning the ashpit, coaling the tender, and a scrubbing down of locomotive and tender with soap and water. Once the engine has been serviced, the engineer or fireman will perform a hammer test on all pins, nuts, and wedges on the running gear and replace brake shoes and tighten up driving box wedges as necessary. The whole process usually takes 1½ hours to make the engine operational for the day, and the rest of the time is used to clean and make adjustments.

Once the train is ready and a brake test has been performed, the train is pulled around the lower loop into the station. The consist is generally seven open-sided, bench seat style cars, which were constructed for the park from former East Broad Top Railroad freight equipment. The last car on the train is capable of wheelchair access, and the conductor on the trip will narrate and observe the train from here. A full train can haul upwards of 600 passengers per trip, and an estimated 5,000 passengers throughout the course of the day. The track length is between 1.9 miles, with a loop and a spring switch on each end with the total round trip being 2.9 miles.

The locomotives perform much differently for the crews going up the grade. The #70 has more power and does not usually struggle with a loaded train, however the #192, with larger drivers, longer frame, and lower boiler pressure, needs to be run with the throttle wide open and speed adjusted with the Johnson bar. The first grade right out of the station is upwards of 5%, and the #192 will stall and need to make another run at the hill if it loses enough momentum. The grade does flatten out for a couple hundred feet as it approaches the Thunderhead Gap bridge. The engineer will blow a warning whistle for the crossing just beyond the bridge, and as the train emerges from the trees, the throttle is opened up as the engine hits the second hill and grinds up the 3-4% grade to the horseshoe curve beyond Sawmill Rd. At the end of this curve, the #192 with its long frame will buck against the curvature which is evidenced by the wear on the frame behind the trailing and pilot trucks. After negotiating a small S-curve through a cut in the hillside, the grade steepens again to about 6% until topping over near the upper loop switch. The crew will need to have enough water in the boiler to keep the crown sheet of the firebox covered for the downhill trip, and while the engineer is blowing the whistle and making the first brake pipe reduction, the fireman is using the raging fire to inject water against the climbing pressure gauge.

Though the cars are fitted with K-1 and K-2 triple valves with retainers, the retainers are always set for the full release position. Brake pipe pressure is set to 70 lbs. fully charged and controlling speed with needed reductions as the grade and load require. The light weight of the cars is accentuated when the train is full vs. empty, making a big difference in how the engineer will handle the train on the return. While riding the train, you will likely hear the hiss of air being released from the brake cylinders as the train goes into the long horseshoe curve, where the grade is flat enough to maintain speed and recharge the brake pipe at the same time. As the engine nears the end of the curve, another set is generally made progressively and will be maintained until the Thunderhead Gap bridge, where the process is repeated and the final application is made for the descent into the lower loop. Once on the lower loop, the train drifts past the engine house and pulls the light grade back into the station.

At the end of the days runs, the train is shoved back to clear the shop lead switch, with the cars being tied down, and the engine spotted for the night of the track pans to clean the fire the next morning. The fire is banked and the boiler is filled with water to sit through the overnight hours. Once that is complete the sight glasses are shut off, along with the air compressor and check valves to the boiler, the dynamo, blower, and injector lines are closed, and finally the turret is shut off and the stack is gagged.