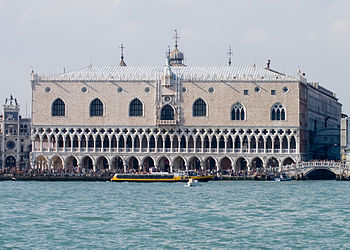 The Doge's Palace in Venice

The Doge's Palace (Italian: Palazzo Ducale) is a gothic palace in Venice, northern Italy. The palace was the residence of the Doge of Venice, the supreme authority of the Republic of Venice.

Its two most visible façades look towards the Venetian Lagoon and St. Mark's Square, or rather the Piazzetta. The use of arcading in the lower stories produces an interesting "gravity-defying" effect. There is also effective use of colour contrasts. 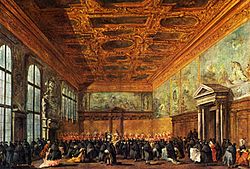 Reception in the palace.

The current palace was largely constructed from 1309 to 1424, designed perhaps by Filippo Calendario. It replaced earlier fortified buildings of which relatively little is known. Giovanni and Bartolomeo Bon created the Porta della Carta in 1442, a monumental late-gothic gate on the Piazzetta side of the palace. This gate leads to a central courtyard.

The palace was badly damaged by a fire on December 20, 1577.[1] In the subsequent rebuilding work it was decided to respect the original Gothic style, despite the submission of a neo-classical alternative design by the influential Renaissance architect Andrea Palladio. However, there are some classical features — for example, since the 16th century, the palace has been linked to the prison by the Bridge of Sighs.

As well as being the ducal residence, the palace housed political institutions of the Republic of Venice until the Napoleonic occupation of the city in 1797. Venice was ruled by an aristocratic elite, but there was a facility for citizens to submit written complaints at what was known as the Bussola chamber.

The palazzo's principal function was to provide a space for the government to carry out its civic responsibilities to its people. The doge did, in fact, reside in the palazzo, however, he held no real power and was a representative figurehead for the Republic.

The building is preserved as a museum. Inside are housed paintings by Tintoretto and Paolo Veronese.

A famous inmate of the Piombi was Giacomo Casanova, who escaped through the roof, re-entered the palace, and was let out.[2]

The New Prison was built across the Rio de Palazzo from the palace. It was connected to the palace by the Bridge of Sighs.[2][3]

The Central rail station, in Iași, built in 1870, had as a model the architecture of the Doge's Palace. On the central part, there is a loggia with five arcades and pillars made of curved stone, having at the top three ogives. 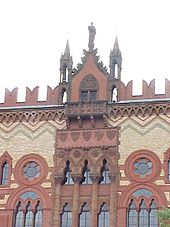 There are a number of nineteenth-century imitations of the palace's architecture in the United Kingdom, e.g. the Wool Exchange, Bradford, the Wedgwood Institute, Burslem, the Scottish National Portrait Gallery, Edinburgh and Templeton's Carpet Factory in Glasgow. These revivals of Venetian Gothic were influenced by the theories of John Ruskin, author of the three-volume The Stones of Venice, which appeared in the 1850s. 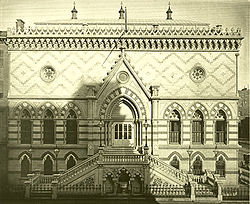 National Academy of Design (1863-65), one of many Gothic Revival buildings modeled on the Doge's Palace

The Montauk Club in Park Slope, Brooklyn (1889) imitates elements of the palace's architecture, although the architect is usually said to have been inspired by another Venetian Gothic palace, the Ca' d'Oro.

The elaborate arched facade of the 1895 building of Congregation Ohabai Shalome in San Francisco is a copy in painted redwood of the Doge's Palace.

The ornate gothic style of the Doge's Palace (and other similar palaces throughout Italy) was impressively replicated in the Hall of Doges at the Davenport Hotel in Spokane, Washington by architect Kirtland Cutter.

The facade of the building is replicated at the Italy Pavilion in Epcot at the Walt Disney World Resort in Orlando, Florida.

Along with other Venetian landmarks, the palace is imitated in The Venetian, Las Vegas.

The Doge's Palace was recreated and is playable in the 2009 video game, Assassin's Creed II.