Dog meat in a Korean market

The consumption of dog meat, called Gaegogi (개고기) in Korean, has had a long history in South Korea as well as other Eastern Asian cultures, but it has been controversial both inside and outside of the country due to animal rights and sanitary concerns.

The consumption of dog meat can be traced back to antiquity. Dog bones were excavated in a neolithic settlement in Changnyeong , Gyeongsangnam-do Province. A wall painting in the Goguryeo tombs complex in South Hwangghae Province, a UNESCO World Heritage site which dates from 4th century AD, depicts a slaughtered dog in a storehouse (Ahn, 2000).[1] The Balhae people also enjoyed dog meat, and the Koreans' appetite for canine cuisine seems to have come from that era.[2]

Koreans have distinguished Chinese terms for dog "견; 犬", which refers to pet dogs, feral dogs, and wolves from the chinese term "구; 狗," which is used specifically to indicate dog meat. "Hwangu" has been considered better for consumption than "Baekgu" (White dog) and "Heukgu" (Black dog).[3]

Approximately In 1816, Jeong Hak-yu (정학유; 丁學遊), the second son of Jeong Yak-yong , a prominent politician and scholar of Choseon dynasty at the time, wrote a poem called Nongawollyeonga. This poem, which is an important source of Korean folk history, describes what ordinary Korean farming families did in each month of a year. In the description of the month of August the poem tells of a married woman visiting her birth parents with boiled dog meat, rice cake, and rice wine, thus showing the popularity of dog meat at the time (Ahn, 2000; Seo, 2002). Dongguk Seshigi, a book written by a Korean scholar Hong Seok Mo in 1849, contains a recipe of Boshintang including a boiled dog, green onion, and red chili pepper powder.[1]

The primary breed raised in dog farms for meat consumption, the Nureongi (누렁이), or Hwangu (황구; 黃狗), differs from those breeds raised for domestic pets.[4][5] Although a fair number of South Koreans (anywhere from 5 to 30%) have eaten dog meat at least once in their lifetime, only a small percentage of the population eats it regularly. There is a large and vocal group of Korean people that are against the practice of eating dog meat.[6] There is also a large population of people in South Korea that do not eat or enjoy the meat, but do feel strongly that it is the right of others to do so.[6] There is a smaller but still vocal group of pro-dog cuisine people in South Korea who want to popularize the consumption of dog in Korea and the rest of the world,[6] considering it to be part of the traditional culture of Korea with a long history worth preserving.

Dog meat is often consumed during the summer months and is either roasted or prepared in soups or stews.[8] The most popular of these soups is Gaejang-guk, a spicy stew meant to balance the body's heat during the summer months. This is thought to ensure good health by balancing one's "ki" or vital energy of the body. A 19th century version of Gaejang-guk (개장국) explains the preparation of the dish by boiling dog meat with green onions and chili powder. Variations of the dish contain chicken and bamboo shoots.[9] 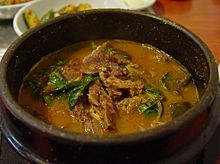 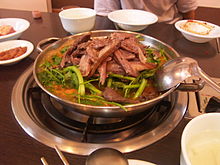 Use of dogs for meat and the methods of slaughter used have generated friction between dog lovers, both Westerners and Koreans, and people who eat dogs; the conflict occasionally breaks out as headline news. During the 1988 Summer Olympics in Seoul, the South Korean government urged its citizens not to consume dog meat in order to avoid bad publicity during the games, along with a request to butcher shops not to hang dog carcasses in the windows.[12] It also closed all restaurants serving Gaejang-guk to better improve the country's image to Western visitors.

The controversy surfaced again in 2001 during the 2002 FIFA World Cup.[13][14] The organizers of the games, under pressure from animal rights groups such as PETA. demanded that the Korean government re-address the issue. Brigitte Bardot, a prominent head of a French animal rights organization which is named after her, launched a crusade during the 2002 FIFA World Cup to have dog meat outlawed in Korea. She prompted people to boycott the games if the government did not outlaw the sale of dog meat in restaurants in Seoul. This movement seemed unfair and out of place to many Koreans, as Bardot's organization has not accomplished anything about dog meat consumption in People's Republic of China, a country with much more political and financial influences on France and EU than South Korea, during 2008 Summer Olympics in Beijing, China, where dog meat (狗肉) has been seen as an affordable meat source and the records of dog consumption date back to 500 B.C. [15]

In Korea, some people eat Bosintang (literally "invigorating soup"), believing it to have medicinal properties, particularly as relates to virility. Dog meat is also believed to keep one cool during the intense Korean summer. Many Korean Buddhists consider eating meat an offense, which includes dog meat.[16] Unlike beef, pork, or poultry, dog meat has no legal status as food in South Korea. Hence dog meat farming takes place in a legal grey area.[17] Some in South Korea and abroad believe that dog meat should be expressly legalized so that only authorized preparers can deal with the meat in more humane and sanitary ways, while others think that the practice should be banned by law.

In recent years, many Korean people have changed their attitudes towards eating dog meat from "personal choice" to "unnecessary cruelty." Animal rights activists in South Korea protest against the custom of eating dog meat.[18] A recent survey by the Korean Ministry of Agriculture showed that 59% of Koreans aged under 30 would not eat dog. Some 62% of the same age group said they regard dogs as pets, not food.[17] Many young Koreans think those who eat dog are an anachronism.[17] Although early Western media reports stated that some dogs were beaten to death,[19] the dogs are not butchered in that way these days [10][17] and usually instantly killed by a blow with an electric rod.[10]