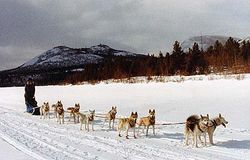 A ten-dog team of Seppala Siberian Sleddogs in tandem hitch on a frozen Mud Lake, a small lake west of Lake Laberge and the Klondike Highway

Sled dog racing (sometimes termed dog sled racing) is a winter dog sport most popular in the Arctic regions of the United States, Canada, Russia, and some European countries.[1] It involves the timed competition of teams of sleddogs that pull a sled with the dog driver or musher standing on the runners. The team completing the marked course in the least time is judged the winner.

A sled dog race was a demonstration sport at the 1932 Winter Olympics in Lake Placid, New York and again at the Olympics in Oslo, but it did not gain official event status.[2]

Sled dogs, known also as sleighman dogs, sledge dogs, or sleddogs, are a highly trained dog type that are used to pull a dog sled, a wheel-less vehicle on runners, over snow or ice, by means of harnesses and lines.

Sled dog races include "sprint" races over relatively short distances of 4 to 25 miles, mid-distance races from 28 to 200 miles, or long-distance races of 200 to over 1000 miles(Iditarod). Sprint races frequently are two or three-day events with heats run on successive days with the same dogs over the same course. Mid-distance races are either heat races of 14 to 80 miles per day, or continuous races' of 100 to 200 miles. (These categories are informal and may overlap to a certain extent.) Long-distance races may be continuous or stage races, in which participants run a different course each day, usually from a central staging location.

Races are categorized not only by distance, but by the maximum number of dogs allowed in each team. The most usual categories are four-dog, six-dog, eight-dog, ten-dog, and unlimited (also called open), although other team size categories can be found.

Races are organized either as "timed starts", or "mass start". In a timed start, teams start one after another in equal time intervals, competing against the clock rather than directly against one another. This simplifies some logistical considerations such as that of getting many teams of excited sleddogs to the starting line simultaneously. In mass starts, all of the dog teams start simultaneously. Mass starts are popular in Europe and many parts of Canada. Some mass start events can have up to 30 teams (300 dogs) start all at once.

Although some races are unsanctioned, held under the sole guidance of a local club, many races fall under one of three international organizations. In the United States and Canada, ISDRA (International Sled Dog Racing Association) sanctions many races. In Europe ESDRA (European Sled Dog Racing Association) provides sanctioning, and the IFSS (International Federation of Sleddog Sports) sanctions World Cup races all over the world, as well as a world championship race every two years.

For the race to be sanctioned, a variety of rules must be followed. For example, the ISDRA sanctioning rules specify that all hazards must be avoided, distances must be reported correctly,and the trail must be clearly described to the competitors. The racers have a duty to treat their dogs humanely, and performance enhancing substances are strictly forbidden.[4]

Dryland Dog Sled Racing is a variant where competitors use a rig (3–4-wheeled cart with a locking brake and handle/steering wheel) or a scooter, a bicycle (Bikejoring), and on foot (Canicross) usually on packed dirt trails instead of a sled on snow. Another mode of dogsled racing is the freight race, in which a specified weight per dog is carried in the sled. This type of race only has about 1 to 5 dogs pulling the sled or scooter at one time.

The American Dog Derby is the oldest dogsled race in the United States[5] and was the first dogsled race that rose to international prominence. Begun in 1917 and heavily promoted by Union Pacific Railroad, it was on par with the Kentucky Derby and with the Indianapolis 500 in terms of interest and press coverage in the early part of the 20th century and was considered to be the world championship dogsled race[6]. American Dog Derby mushers were international celebrities to such degree that one photogenic female musher named Lydia Hutchinson was tapped by a producer to star in his movie. She may have been on her way to being a movie star when she died of pneumonia in 1930. The American Dog Derby popularized dogsled racing in the 20's and other dogsled races were organized in towns and cities across North America and Northern Europe in its wake.

The most famous long-distance race is the Iditarod Trail Sled Dog Race. Also known as the "Last Great Race on Earth", the Iditarod is over 1150 miles of some of the roughest and most beautiful terrain in the world. The race consists of fierce mountains, frozen rivers, thick forests, and desolate tundras. Each team of 12–16 dogs must go from Anchorage all the way to Nome.[7]

Although each musher has different strategies, each team must have certain pieces of equipment, such as an arctic parka, an ax, snowshoes, and boots for each dog's feet to protect against cutting ice and hard packed snow injuries.

Racing sleddogs wear individual harnesses to which "tuglines" are snapped, pulling from a loop near the root of the tail. The dogs are hooked in pairs, their tuglines being attached in turn to a central "gangline". The lines usually include short "necklines" snapped to each dog's collar, just to keep the dogs in proper position. It is unusual ever to see more than 22 dogs hooked at once in a racing team, and that number is usually seen only on the first day of the most highly competitive sprint events. Dogs may be omitted from the teams on subsequent days, but none may be added. Many other rules apply, most of which have been in effect since the beginning of organized dogsled racing in the city of Nome, Alaska, in 1908.