Palestinian views on the peace process

Palestinian views on the peace process

Hamas and the Palestinian Islamic Jihad

A flag, with the Shahadah, frequently used by Hamas supporters

The stated goal of Hamas and the Palestinian Islamic Jihad is to conquer Israel and replace it with an Islamist state.[4] Hamas undertook a ceasefire with Israel in August 2004. The Palestinian Islamic Jihad was unhappy with the ceasefire.[5][6] In September 2005, Hamas was criticized by Islamic Jihad for calling off rocket attacks on Israel from Gaza. Because the very identity of Hamas depends on its militancy and rejection of any form of Jewish life in the Middle East, Hamas has shown no interest in cooperating with the United States on any sort of peace negotiation.[7]

In 2008, Hamas publicly offered a long-term hudna (truce) with Israel if Israel agreed to return to its 1967 borders and to grant the "right of return" to all Palestinian refugees. The New York Times' Steven Erlanger contends that Hamas excludes the possibility of permanent reconciliation with Israel. "Since the Prophet Muhammad made a temporary hudna, or truce, with the Jews about 1,400 years ago, Hamas allows the idea. But no one in Hamas says he would make a peace treaty with Israel or permanently give up any part of Palestine.".[8]

Yasser Arafat and the PLO 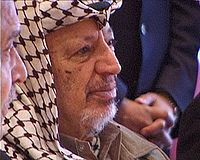 The PLO has complex, often contradictory attitudes toward the peace process. Officially, the PLO acceptance of Israel's right to exist in peace was the first of the PLO's obligations in the Oslo Accords. In Yasser Arafat's September 9, 1993 letter to Israeli Prime Minister Yitzhak Rabin, as part of the first Oslo accord, Arafat stated that "The PLO recognizes the right of the State of Israel to exist in peace and security."[10] Electronic Intifada stated that Arafat has made several calls for an end to violence and lasting peace.[11] These remarks from Arafat indicated a shift away from one of the PLO's primary aims—the destruction of Israel.[12]

However, evidence throughout history and even during the 1990s and 2000s have shown that the PLO leadership considered any peace made with Israel to be temporary until the dream of Israel's destruction could be realized.[13][14] Arafat often spoke of the peace process in terms of "justice" for the Palestinians; terms historian Efraim Karsh described as "euphemisms rooted in Islamic and Arabic history for the liberation of the whole of Palestine from 'foreign occupiers.'"[13] When describing his views of the peace process among Arab leaders and in the media of the Arab world, Arafat's rhetoric became noticeably more bellicose than it was when among Western leaders and media outside of the Arab world.[13] The period saw a disconnect between what the PLO's second in command Abu Iyad referred to as "the language of peace" and support of Palestinian terrorism.[15]

Since the 1990s, there has been a debate within the PLO as to whether to halt terrorist activities completely or to continue attacking Israel as well as negotiate diplomatically with Israel.[16] In practice, terrorism was never fully banned. Furthermore, assassination attempts by radical Palestinian factions within the PLO since the early years of the peace process kept Arafat from expressing full, public support of the peace process or condemnation of terrorism without risking further danger to his own life.[17]

In 2000, after Yasser Arafat rejected the offer made to him by Ehud Barak based on the two-state solution and declined to negotiate for a more favorable offer, it became clear that Arafat would not make a deal with Israel unless it included the full Palestinian right of return, which, analysts on all sides agree, would demographically destroy the Jewish, democratic character of the State of Israel.[18] For this reason, critics of Arafat claim that he put his desire to destroy the Jewish state above his dream of building an autonomous Palestinian state.[19]

When Sari Nusseibeh was the representative of the Palestinian Authority in Jerusalem (circa 2000), he called for historic compromises by both Palestinians and Israelis, to secure a permanent and lasting peace. For example, he stated that Palestinians must give up their claim of a right of return. With this concession, he argued, a true and lasting peace could emerge.[citation needed]

Chief Palestinian negotiator Saeb Erekat said on August 5, 2000, "Palestinians are no strangers to compromise. In the 1993 Oslo Accords, we agreed to recognize Israeli sovereignty over 78 percent of historic Palestine and to establish a Palestinian state on only 22 percent."[citation needed] Rashid Abu Shbak, a senior PA security official declared, "The light which has shone over Gaza and Jericho [when the PA assumed control over those areas] will also reach the Negev and the Galilee [which constitute a large portion of pre-1967 Israel]."[20]

The PA's Voice of Palestine radio station broadcast a Friday prayer sermon by Yusuf Abu Sneineh, official preacher at Jerusalem's Al-Aqsa Mosque, over the radio. In it, he asserted, "The struggle we are waging is an ideological struggle and the question is: where has the Islamic land of Palestine gone? Where [are] Haifa and Jaffa, Lod and Ramle, Acre, Safed and Tiberias? Where is Hebron and Jerusalem?"[21][22]

Faisal Husseini, former Palestinian Authority Minister for Jerusalem, compared the al-Aqsa intifada following the Oslo peace process to the tactic of coming out of the Trojan Horse used by the Greeks in the myth of the Trojan War.[23]