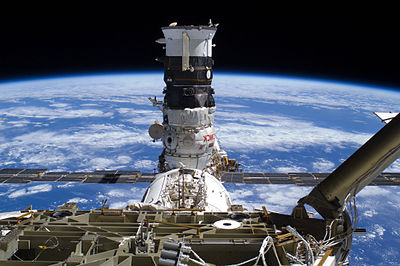 Poisk (Russian: По́иск; lit. Search), also known as the Mini-Research Module 2 (MRM 2), Малый исследовательский модуль 2, or МИМ 2, is a docking module of the International Space Station. Its original name was Docking Module 2 (Stykovochniy Otsek 2 (SO-2)), as it is almost identical to the Pirs Docking Compartment. Poisk was the first major Russian addition to the International Space Station since 2001.[1] 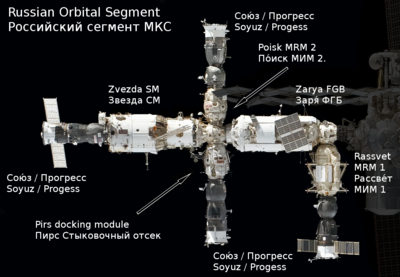 The location of MRM-2 on the Russian Orbital Segment.

Poisk arrives at the ISS for docking in 2009.

Poisk docked to the zenith port of the Zvezda module on November 12, 2009, and will serve as an additional docking port for Soyuz and Progress spacecraft and as an airlock for spacewalks. Poisk will also provide extra space for scientific experiments, and provide power-supply outlets and data-transmission interfaces for two external scientific payloads to be developed by the Russian Academy of Sciences.

On June 10, 2009, during Russian Orlan EVA-23 spacewalk[3] Padalka and Barratt replaced a flat hatch cover in the forward section of Zvezda with a standard conical docking cone cover to allow for Poisk's docking.

On January 14, 2010, cosmonauts Oleg Kotov and Maksim Suraev conducted a spacewalk to outfit the Poisk module to prepare for receiving Soyuz and Progress ships in the future[4]. They deployed antennas and a docking target, installed two handrails and plugged the new module's Kurs antennas into the Kurs docking system circuitry[5]. The spacewalk lasted five hours and 44 minutes.

On January 21, 2010, the module was first used when cosmonaut Suraev and Expedition 22 Commander Jefferey Williams relocated their Soyuz TMA-16 spacecraft from the aft port of the Zvezda module to the zenith-facing port of the Poisk module[6]. The Soyuz TMA-16 spacecraft undocked from the aft end of the Zvezda service module at 10:03 UTC and backed away to a distance of about 100 feet from the space station. Undocking occurred as the station flew about 213 miles high off the southwest coast of Africa. Re-docking occurred at 10:24 UTC after Suraev fired the Soyuz maneuvering thrusters to fly halfway around the orbiting space station and line up with the Poisk module.

The module was designed and built by S.P. Korolev RSC Energia[7][8][9], the leading organization engaged in the development and operational use of the ISS Russian segment.

The propulsion compartment of the Poisk module departs the Space Station.

The module was launched on November 10, 2009, 2:22 p.m. GMT[10][11] attached to a modified Progress spacecraft, called Progress M-MIM2, on a Soyuz-U rocket from Launch Pad 1 at the Baikonur Cosmodrome in Kazakhstan. The occasion also marked the 1750th launch of a Soyuz rocket in its various configurations.[12] About eight minutes after launch, the three-stage Soyuz rocket delivered Poisk, to a low-altitude injection orbit. According to NASA Poisk carried about 1800 pounds of cargo to the ISS including new Russian Orlan spacesuits, life support equipment, medical supplies and crew hygiene items.

The Progress space tug provided electrical power and propulsion for the Poisk module during its two-day journey to the space station. On 12 November, Progress began its automated final approach to the station on a Kurs rendezvous radar system and at 15:41 UTC[13] Poisk docked to the Zvezda module's zenith port. The docking happened as the space station sailed more than 220 miles over northern Kazakhstan.

Cosmonauts Maksim Suraev and Roman Romanenko entered the module for the first time by opening the hatch leading into Poisk at 12:17 UTC on 13 November 2009.

The jettisoning of the Progress ship from the Poisk module happened around 8 December 2009. The Progress was destroyed during re-entry into the atmosphere. 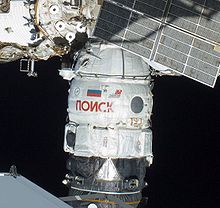 Poisk after arriving at the Space Station on November 12, 2009.

False alarms woke the crews aboard space shuttle Atlantis and the Space Station at 01:36 UTC on 20 November 2009 and once again at 02:53 UTC on 21 November.[15][16] An erroneous indication of a rapid depressurization led to the automatic shutdown of ventilation fans throughout the station, which stirred up dust and led to a false smoke detection alarm in the European Space Agency's Columbus laboratory. Mission control Capcom Frank Lien in Houston told Expedition 21 Commander Frank De Winne it might have originated with the Poisk module.