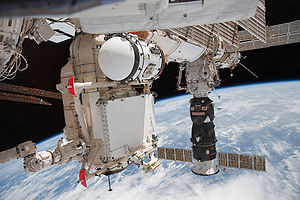 Rassvet as seen from the Cupola module during STS-132. 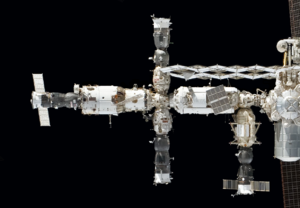 Russian Orbital Segment as seen from the departing STS-135 in July 2011.

Rassvet (Russian: Рассве́т; lit. "dawn"), also known as the Mini-Research Module 1 (MRM-1) (Russian: Малый исследовательский модуль, МИМ 1) and formerly known as the Docking Cargo Module (DCM), is a component of the International Space Station (ISS). The module's design is similar to the Mir Docking Module launched on STS-74 in 1995. Rassvet is primarily used for cargo storage and as a docking port for visiting spacecraft. It was flown to the ISS aboard Space Shuttle Atlantis on the STS-132 mission on May 14, 2010,[1] and was connected to the ISS on May 18.[2] The hatch connecting Rassvet with the ISS was first opened on May 20.[3] On 28 June 2010, the Soyuz TMA-19 spacecraft performed the first docking with the module.[4] 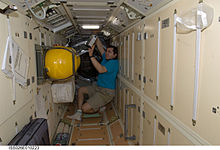 An interior view of Rassvet.

Rassvet was docked to the nadir port of Zarya with help from the SSRMS.[5] Rassvet carried externally attached outfitting equipment from NASA for the Nauka Multipurpose Laboratory Module (MLM), a spare elbow joint for the European Robotic Arm, and a radiator. Delivering Rassvet thus enabled NASA to fulfill its promise to ship 1.4 metric tons to equip the MLM.[6]

Rassvet has two docking units: one to attach to the nadir port of the Zarya module, and one to provide a docking port for a Soyuz or Progress spacecraft. It implements the role of the Docking and Stowage Module from the original ISS design. Russia announced the cancellation of the last of the two planned Russian Research Modules when it announced the plans for Rassvet.

The initial ISS plan included a Docking and Stowage Module (DSM). This planned Russian element was intended to provide facilities for stowage and an additional docking port, and would have been launched to the station on a Proton launch vehicle. The DSM would have been mounted to Zarya's nadir (Earth-facing) docking port. It would have been similar in size and shape to the Zarya module.

The DSM was cancelled due to Russian budgetary constraints for some time, but its design was eventually modified into the Docking and Cargo Module (Rassvet) that was to be connected to the same Zarya location to provide stowage space and a docking port. During the cancellation period, it was proposed that a Multi Purpose Module (MPM) called Enterprise should be docked to Zarya, and later the Multipurpose Laboratory Module (MLM) was proposed to be located there as well, but the Enterprise module has since been cancelled and the MLM will be docked to Zvezda's nadir port instead.

Rassvet was designed as a solution to two problems facing the ISS partners:

Rassvet solved both of these issues. NASA did not need to add another payload flight to accommodate the MLM outfitting equipment, as it could attach the hardware to the exterior of MRM-1; the ISS now had 4 docking ports available: the aft port of Zvezda, the port of Pirs, later MLM (on the nadir port of Zvezda), the port of MRM-2 (on the zenith port of Zvezda), and the port on MRM-1 (on the nadir port of Zarya); and Russia's cancellation of the Research Module came to be of less consequence for the ISS program as a whole.

The Experiment Airlock on the Rassvet module.

The module was designed and built by S.P. Korolev RSC Energia, from the already-made pressurized hull of the mock-up for dynamic tests of the canceled Science Power Platform[7][8].

On December 17, 2009, an Antonov An-124 carrying the Rassvet Module and ground process equipment arrived at the Kennedy Space Center in Florida[9]. Upon unloading, the equipment was delivered to a prelaunch processing facility run by the Astrotech. Energia specialists and technicians continued their work on the processing of the Rassvet module at the facility, completing stand-alone electrical tests and leak tests of the module and the airlock. They also prepared the airlock and the radiative heat exchanger for installation onto Rassvet. The module was moved to NASA's Space Station Processing Facility on April 2, 2010. After completing the final touches, it was placed into the shuttle payload transporter on April 5, 2010. The payload canister containing the Rassvet Module arrived at Launch Pad 39A on April 15, 2010.[10]

Engineers at Launch Pad 39A preparing Space Shuttle Atlantis had noticed paint peeling from the MRM-1 module. Although the problem was declared to have no impact on the operation of Rassvet, it posed a potential threat of releasing debris on orbit.[11]

The Soyuz TMA-19 spacecraft docks to the Rassvet Mini-Research Module 1.