Peace in Africa is a diamond-mining ship owned and operated by De Beers in the western coast of South Africa.[11] Built in 1983 as Dock Express 20 for Dock Express Shipping (later Dockwise), the semi-submersible multirole heavy lift vessel was converted to the world's largest cable layer in 1993.[9] In 2005 she was purchased by De Beers, converted to a subsea diamond mining ship by A&P Tyne over the course of 11 months. The ship's new name, Peace in Africa, [6][12] implies that it is providing an alternative to blood diamonds.

The ship's gross tonnage, a measure of the volume of all its enclosed spaces, is 14,793. Its net tonnage, which measures the volume of the cargo spaces, is 4,437. Its total carrying capacity in terms of weight, is 14,617 long tons deadweight (DWT), the equivalent of approximately 300 adult male sperm whales.[14]

Dock Express 20 was powered by two Stork-Werkspoor 6TM410 four-stroke medium-speed marine diesel engines of 3,128 kW (4,195 hp) apiece. Each engine powered an independent controllable-pitch propeller. This main propulsion system was able to move the ship at 16 knots (30 km/h; 18 mph). For harbor-maneuvering, the vessel was also fitted with a 625 kW bow thruster. In addition the ship has two 600-kilowatt (800 hp) auxiliary generators to provide shipboard electrical power. When the Dock Express 20 was converted to a dynamically positioned cable ship, she was refitted with three 1,325 kilowatts (1,777 hp) azimuth thrusters to serve as its main propulsion.

Dock Express 20 was originally built to house 24 crewmembers, but that number was more than tripled in the 1993 conversion. In 2007 the ship was converted again to work as a dredger, increasing the gross tonnage to 15,854, and the deadweight tonnage to 7,935 long tons.

Dock Express 20 was built for use in the offshore oil industry.[15]

The Dock Express 20 was involved in the sinking of the tugboat Terminator some 20 miles (32 km) off the coast of California on 27 January 1992. Following an engine failure the heavy seas pushed the tugboat against one of the protruding stern sponsons of the heavy lift vessel, causing enough damage to sink the vessel in 25 minutes. The crew evacuated to a life raft and was picked up by another ship.[16]

The ship was converted to a cable layer by Tyco Submarine Systems, and worked under charter to this company.[15]

Dock Express 20 is pictured on the Russian postcard commemorating a submarine cable between Denmark and Russia. The ship laid a 1,200 kilometres (750 mi) cable from Copenhagen to Kingiseppe, which connects via microwave to Moscow and St. Petersburg.[17]

Dock Express 20 was one of three ships that worked on the northern section of the Pacific Crossing-1 (PC-1) system cable, linking the United States and Japan.[18] It also laid telecommunications cable between San Francisco and Guam.[19] 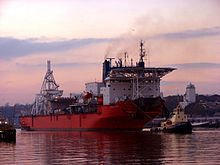 Departing for sea trials near the end of the 2006 refit. Photo by Gary Williams.

As of 2011, Peace in Africa was operating off the coast of Namaqualand in underwater diamond mining.[20] Its ML3 mining license, according to a 2007 report, began appx. 5 km offshore of Kleinzee, running north to Alexander Bay, Northern Cape, and extended seaward for 17–32 km. Prior to 2007, the ship had operated in the neighboring Atlantic 1 licence area in Namibia, which contained higher gem quality diamonds.[21]

The dredging equipment aboard Peace in Africa includes a 240 ton crawler, described as "a large undersea tracked mining tool" connected to the ship by a 655 mm internal diameter rubber hose, and a "diamond recovery treatment plant" built by Bateman Engineering.[20][22] The dredge has a suction capacity of about 10,000 cubic meters of water and gravel per hour, resulting in about 250 tons of material to be processed for diamonds.[21] The anticipated yield is approximately 60 diamonds per hour,[10] or roughly 240,000 carats annually.[22]

Peace in Africa was the second largest ship registered in South Africa, and worked on a continuous, round-the-clock basis, as of 2007. Its mining operation was projected to have a lifespan of nineteen years.[21]

As of 2006, De Beers Marine Namibia was operating five mining vessels, including Peace in Africa.[11]