Djurgården will in the 2010 season compete in the Allsvenskan and Svenska Cupen. Tommy Jacobson was selected as new chairman and Lennart Wass became new manager and would work together with the manager from 2009, Andreé Jeglertz, but Jeglertz chose to left the club. Carlos Banda was contracted to work with Wass. 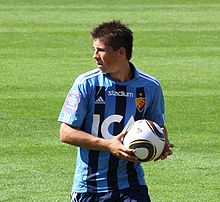 Friendly games because of Allsvenskan time-out during 2010 FIFA World Cup.

Updated to games played on 31 August 2010
Source: svenskfotboll.se (Swedish)
Rules for classification: 1) points; 2) goal difference; 3) number of goals scored.
(C) = Champion; (R) = Relegated; (P) = Promoted; (O) = Play-off winner; (A) = Advances to a further round.
Only applicable when the season is not finished:
(Q) = Qualified to the phase of tournament indicated; (TQ) = Qualified to tournament, but not yet to the particular phase indicated; (DQ) = Disqualified from tournament.

* Häcken will use Borås Arena as stadium for the season premiere because of weather conditions.

** Will be played without any supporters at the stadium, because of some incidents during the match against Assyriska in last years relegation match for Allsvenskan.