The lingzhi mushroom or reishi mushroom (traditional Chinese: 靈芝; pinyin: língzhī; Japanese: reishi; Vietnamese: linh chi; literally: "supernatural mushroom") encompasses several fungal species of the genus Ganoderma, and most commonly refers to the closely related species, Ganoderma lucidum and Ganoderma tsugae. G. lucidum enjoys special veneration in East Asia, where it has been used as a medicinal mushroom in traditional Chinese medicine for more than 2,000 years,[1] making it one of the oldest mushrooms known to have been used medicinally. Because of lingzhi's presumed health benefits and apparent absence of side-effects, it has attained a reputation in the East as the ultimate herbal substance. Lingzhi is listed in the American Herbal Pharmacopoeia and Therapeutic Compendium.

Names for the lingzhi fungus have a two thousand year history. The Chinese term lingzhi 靈芝 was first recorded in the Eastern Han Dynasty (25-220 CE). Petter Adolf Karsten named the genus Ganoderma in 1881.[2]

The lingzhi's botanical names have Greek and Latin roots. The generic name Ganoderma derives from the Greek ganos γανος "brightness; sheen", hence "shining" and derma δερμα "skin".[3] The specific epithet lucidum is Latin for "shining" and tsugae for "hemlock" (from Japanese Tsuga 栂).

There are multiple species of lingzhi, scientifically known to be within the Ganoderma lucidum species complex and mycologists are still researching the differences among species within this complex.[4]

English lingzhi or ling chih (sometimes misspelled "ling chi" from French EFEO Chinese transcription) is a Chinese loanword. The Oxford English Dictionary gives Chinese "líng divine + zhī fungus" as the origin of ling chih or lingzhi, and defines, "The fungus Ganoderma lucidum, believed in China to confer longevity and used as a symbol of this on Chinese ceramic ware."[14] The OED notes the earliest recorded usage of the Wade-Giles romanization ling chih in 1904,[15] and of the Pinyin lingzhi in 1980. In addition to the transliterated loanword, English names include "glossy ganoderma" and "shiny polyporus".[16]

Lingzhi is a polypore mushroom that is soft (when fresh), corky, and flat, with a conspicuous red-varnished, kidney-shaped cap and, depending on specimen age, white to dull brown pores underneath.[8] It lacks gills on its underside and releases its spores through fine pores, leading to its morphological classification as a polypore. 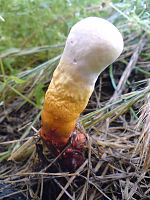 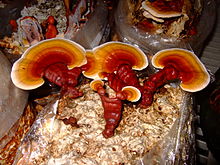 Ganoderma lucidum generally occurs in two growth forms, one, found in North America, is sessile and rather large with only a small or no stalk, while the other is smaller and has a long, narrow stalk, and is found mainly in the tropics. However, many growth forms exist that are intermediate to the two types, or even exhibit very unusual morphologies,[8] raising the possibility that they are separate species. Environmental conditions also play a substantial role in the different morphological characteristics lingzhi can exhibit. For example, elevated carbon dioxide levels result in stem elongation in lingzhi. Other forms show "antlers', without a cap and these may be affected by carbon dioxide levels as well. 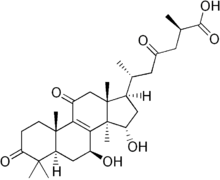 Ganoderic acid A, a compound isolated from Lingzhi.

Ganoderma lucidum produces a group of triterpenes, called ganoderic acids, which have a molecular structure similar to steroid hormones.[17] It also contains other compounds many of which are typically found in fungal materials including polysaccharides such as beta-glucan, coumarin,[18] mannitol, and alkaloids.[17]

Ganoderma lucidum, and its close relative Ganoderma tsugae, grow in the northern Eastern Hemlock forests. These two species of bracket fungus have a worldwide distribution in both tropical and temperate geographical regions, including North and South America, Africa, Europe, and Asia, growing as a parasite or saprotroph on a wide variety of trees.[8] Similar species of Ganoderma have been found growing in the Amazon.[19] In nature, Lingzhi grows at the base and stumps of deciduous trees, especially maple.[20] Only two or three out of 10,000 such aged trees will have Lingzhi growth, and therefore its wild form is generally rare. Today, Lingzhi is effectively cultivated both indoors under sterile conditions and outdoors on either logs or woodchip beds. 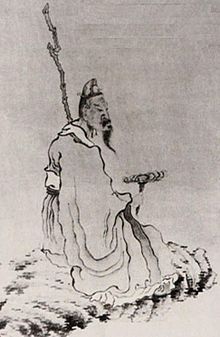 The Chinese classics first used zhi during the Warring States Period (475-221 BCE) and lingzhi during the Han Dynasty (206 BCE-220 CE).

The word zhi 芝 occurs approximately 100 times in classical texts.[21] Occurrences in early Chinese histories, such as the (91 BCE) Shiji "Records of the Grand Historian" and (82 CE) Hanshu "Book of Han", predominantly refer to the "mushroom of immortality; elixir of life". They record that fangshi "masters of esoterica; alchemists; magicians", supposedly followers of Zou Yan (305-240 BCE), claimed to know secret locations like Mount Penglai where the magic zhi mushroom grew. Some sinologists propose that the mythical zhi 芝 derived from Indian legends about soma that reached China around the 3rd century BCE.[22] Fangshi courtiers convinced Qin and Han emperors, most notably Qin Shi Huang (r. 221-210 BCE) and Emperor Wu of Han (r. 141-87 BCE), to dispatch large expeditions (e.g., Xu Fu in 219 BCE) seeking the zhi plant of immortality, but none produced tangible results. Zhi occurrences in other classical texts often refer to an edible fungi. The Liji "Record of Ritual" lists zhi "lichens" as a type of condiment.[23] The Chuci "Songs of the South" metaphorically mentions, "The holy herb is weeded out".[24] The Huainanzi "Philosophers of Huainan" records a zizhi 紫芝 "purple mushroom" aphorism, "The zhi fungus grows on mountains, but it cannot grow on barren boulders."[25]

Chi Zhi (Ganoderma Rubra) is bitter and balanced. It mainly treats binding in the chest, boosts the heart qi, supplements the center, sharpens the wits, and [causes people] not to forget [i.e., improves the memory]. Protracted taking may make the body light, prevent senility, and prolong life so as to make one an immortal. Its other name is Dan Zhi (Cinnabar Ganoderma). It grows in mountains and valleys.[27][28]

While Chinese texts have recorded medicinal uses of lingzhi for more than 2,000 years, a few sources erroneously claim more than 4,000 years.[29] Modern scholarship neither accepts the historicity of Shennong "Divine Farmer" (legendary inventor of agriculture, traditionally r. 2737-2697 BCE) nor that he wrote the Shennong bencao jing.

Tiny excresences. These grow deep in the mountains, at the base of large trees or beside springs. They may resemble buildings, palanquins and horses, dragon and tigers, human beings, or flying birds. They may be any of the five colors. They too number 120 for which there exist illustrations. All are to be sought and gathered while using Yu's Pace [a Daoist ritual walk], and they are to be cut with a bone knife. When dried in the shade, powdered, and taken by the inch-square spoonful, they produce geniehood. Those of the intermediate class confer several thousands of years, and those of the lowest type a thousand years of life.[31]

Pregadio concludes, "While there may be no better term than "mushrooms" or "excresences" to refer to them, and even though Ge Hong states that they "are not different from natural mushrooms (ziran zhi 自然芝) (Baopuzi 16.287)", the zhi pertain to an intermediate dimension between mundane and transcendent reality."[32]

It positively affects the life-energy, or Qi of the heart, repairing the chest area and benefiting those with a knotted and tight chest. Taken over a long period of time, agility of the body will not cease, and the years are lengthened to those of the Immortal Fairies.[33][34]

芝 (Chih) is defined in the classics as the plant of immortality, and it is therefore always considered to be a felicitous one. It is said to absorb the earthy vapors and to leave a heavenly atmosphere. For this reason it is called 靈芝 (Ling-chih.) It is large and of a branched form, and probably represents Clavaria or Sparassis. Its form is likened to that of coral.[35]

The Bencao Gangmu does not list lingzhi as a variety of zhi, but as an alternate name for the shi'er 石耳 "stone ear" "Umbilicaria esculenta" lichen. According to Stuart and Smith,

[The 石耳 Shih-erh is] edible, and has all of the good qualities of the 芝 (Chih), being also used in the treatment of gravel, and being said to benefit virility. It is specially used in hemorrhage from the bowels and prolapse of the rectum. While the name of this would indicate that it was one of the Auriculariales, the fact that the name 靈芝 (Ling-chih) is also given to it might place it among the Clavariaceae.[36]

Chinese pharmaceutical handbooks on zhi mushrooms were the first illustrated publications in the history of mycology. The historian of Chinese science Joseph Needham discussed a no-longer extant Liang Dynasty (502-587) illustrated text called Zhong Shenzhi 種神芝 "On the Planting and Cultivation of Magic Mushrooms".

The pictures of mushrooms in particular must have been an extremely early landmark in the history of mycology, which was a late-developing science in the West. The title of [this book] shows that fungi of some kind were being regularly cultivated – hardly as food, with that special designation, more probably medicinal, conceivably hallucinogenic."[37]

In Chinese art, the lingzhi symbolizes good health and long life, as depicted in the imperial Forbidden City and Summer Palace.[41] It was a talisman for good luck in the traditional culture of China, and the goddess of healing Guanyin is sometimes depicted holding a lingzhi mushroom.[42]

Lingzhi may possess anti-tumor, immunomodulatory and immunotherapeutic activities, supported by studies on polysaccharides, terpenes, and other bioactive compounds isolated from fruiting bodies and mycelia of this fungus (reviewed by R. R. Paterson[17] and Lindequist et al.[43]). It has also been found to inhibit platelet aggregation, and to lower blood pressure (via inhibition of angiotensin-converting enzyme[44]), cholesterol, and blood sugar.[45]

Laboratory studies have shown anti-neoplastic effects of fungal extracts or isolated compounds against some types of cancer, including epithelial ovarian cancer.[46] In an animal model, Ganoderma has been reported to prevent cancer metastasis,[47] with potency comparable to Lentinan from Shiitake mushrooms.[48]

The mechanisms by which G. lucidum may affect cancer are unknown and they may target different stages of cancer development: inhibition of angiogenesis (formation of new, tumor-induced blood vessels, created to supply nutrients to the tumor) mediated by cytokines, cytoxicity, inhibiting migration of the cancer cells and metastasis, and inducing and enhancing apoptosis of tumor cells.[17] Nevertheless, G. lucidum extracts are already used in commercial pharmaceuticals such as MC-S for suppressing cancer cell proliferation and migration.

Additional studies indicate that ganoderic acid has some protective effects against liver injury by viruses and other toxic agents in mice, suggesting a potential benefit of this compound in the treatment of liver diseases in humans,[49] and Ganoderma-derived sterols inhibit lanosterol 14α-demethylase activity in the biosynthesis of cholesterol .[50] Ganoderma compounds inhibit 5-alpha reductase activity in the biosynthesis of dihydrotestosterone.[44]

Due to its bitter taste, Lingzhi is traditionally prepared as a hot water extract.[53] Thinly sliced or pulverized lingzhi (either fresh or dried) is added to a pot of boiling water, the water is then brought to a simmer, and the pot is covered; the lingzhi is then simmered for two hours.[citation needed] The resulting liquid is fairly bitter in taste, with the more active red lingzhi more bitter than the black. The process is sometimes repeated. Alternatively, it can be used as an ingredient in a formula decoction or used to make an extract (in liquid, capsule, or powder form). The more active red forms of lingzhi are far too bitter to be consumed in a soup.