Divine judgment means the judgment of God or other supreme beings within a religion. The concept is prominent in Abrahamic religions, most significantly in the Last judgment.

In Catholic doctrine, divine judgment (Latin judicium divinum), as an imminent act of God, denotes the action of God's retributive justice by which the destiny of rational creatures is decided according to their merits and demerits. This includes:

The judgment, as it is in God, cannot be a process of distinct and successive acts; it is a single eternal act identical with the Divine Essence. But the effects of the judgment, since they take place in creatures, follow the sequence of time. The Divine judgment is manifested and fulfilled at the beginning, during the progress and at the end of time.

In the beginning, God pronounced judgment upon the whole race, as a consequence of the fall of its representatives, the first parents (Genesis 3). Death and the infirmities and miseries of this were the consequences of that original sentence. Besides this common judgment there have been special judgments on particular individuals and peoples. Such great catastrophes as Noah's flood (Genesis 6:5), the destruction of Sodom and Gomorrah (Genesis 28:20), the earthquake that swallowed up Korah and his followers (Numbers 16:30), the plagues of Egypt (Exodus 6:6; 12:12) and the evil that came upon other oppressors of Israel (Ezekiel 25:11; 28:22) are represented in the Bible as Divine judgments. The fear of God is such a fundamental idea in the Old Testament that it insists mainly on the punitive aspect of the judgment (cf. Proverbs 11:31; Ezekiel 14:21). These truths led many of the rabbis to teach that all the evil which befalls humanity is a special chastisement from on high, a doctrine based on an understanding that God has all power, and must give it unto creatures first, before they can use it, as the Book of Job shows.

There is also a judgment of God in the world that is subjective. By their acts a person adheres to or deviates from the law of God, and thereby places themselves within the sphere of approval or condemnation. In a sense then, each individual exercises judgment on themselves. Hence it is declared that Christ came not to judge but to save (John 3:17; 8:15; 12:47). The internal judgment proceeds according to a person's attitude: towards Christ (John 3:18). Though all the happenings of life cannot be interpreted as the outcome of Divine judgment, whose external manifestation is therefore intermittent, the subjective judgment is coextensive with the life of the individual and of the race.

Anubis conducts Hunefer to judgment, where his heart will be weighed against the feather of truth; the fourteen gods above sit in order of judgment, with the underworld ruler Osiris, flanked by Isis and Nephthys, to the right, and the monstrous Ammit waiting next to the scales to devour the souls of those whose hearts are heavier than the feather

The idea of a final readjustment beyond the grave, which would rectify the sharp contrast so often observed between the conduct and the fortune of men, was prevalent among all nations in pre-Christian times. Such was the doctrine of metempsychosis or the transmigration of souls, as a justification of the ways of God to man, prevailing among the Hindus of all classes and sects, the Pythagoreans, the Orphic mystics and the Druids among the Celts. The doctrine of a forensic judgment in the unseen world, by which the eternal lot of departed souls is determined, was also widely prevalent in pre-Christian times.

The Pharaonic Egyptian idea of the judgment is set forth with great precision of detail in the "Book of the Dead", a collection of formulas designed to aid the dead in their passage through the underworld.

The Babylonians and the Assyrians made no distinction between the good and the bad so far as the future habitation is concerned. In the Gilgames epic the hero is marked as judge of the dead, but whether his rule was the moral value of their actions is not clear.

With the Jews, the judgment of the living was a far more prominent idea than the judgment of the dead. The Pentateuch contains no express mention of remuneration in the future life, and only at a comparatively late period, under the influence of a fuller revelation, the belief in resurrection and judgment began to play a capital part in the faith of Judaism. The traces of this theological development are plainly visible in the Machabean era. Then arose the two great opposing parties, the Pharisees and the Sadducees, whose different interpretations of Scripture led to heated controversies, especially regarding the future life.

The Sadducees denied all reward and penalty in the hereafter, while their opponents encumbered the truth with many details. Thus some of the rabbis asserted that the trumpet which would summon the world to judgment would be one of the horns of the ram which Abraham offered up instead of his son Isaac. Again they said: "When God judges the Israelites, He will stand, and make the judgment brief and mild; when He judges the Gentiles, he will sit and make it long and severe." Apart from such rabbinical fables, the current belief reflected in the writings of the rabbis and the pseudographs at the beginning of the Christian Era was that of a preliminary judgment and of a final judgment to occur at the consummation of the world, the former to be executed against the wicked by the personal prowess of the Messiah and of the saints of Israel, the latter to be pronounced as an eternal sentence by God or the Messiah. The particular judgment of the individual person is lost sight of in the universal judgment by which the Messiah vindicate the wrongs endured by Israel.

With Alexandrian Judaism, on the contrary, with that at least of which Philo is the exponent, the dominant idea was that of an immediate retribution after death. The two dissenting sects of Israel, the Essenes and the Samaritans, were in agreement with the majority of Jews as to the existence of a discriminating retribution in the life to come. The Essenes believed in the preexistence of souls, but taught that the after-existence was an unchanging state of bliss or woe according to the deeds done in the body. The eschatological tenets of the Samaritans were at first few and vague. Their doctrine of the resurrection and of the day of vengeance and recompense was a theology patterned after the model of Judaism, and first formulated for the sect by its greatest theologian, Marka (A.D. fourth century). 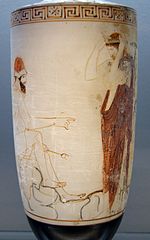 The so-called "Book of the Dead" (Nekyia) in the Odyssey depicts judgment in the afterlife by Minos, the "radiant son of Zeus" who in his mortal life had been king of Crete.[1] Three egregious sinners are singled out for eternal punishment, but the theological implications of the scene are unclear. Plato elaborates on the concept in the myth of Er at the end of the Republic. Each misdeed receives a tenfold penalty, with rewards also proportional. Elsewhere,[2] Plato names the judges as Minos and Rhadamanthys, but he also draws on the tenets of Orphic religion. A third judge was Aeacus; all three were once mortal kings whose excellence as rulers among the living was transferred to the dead.[3] Vergil's depiction of the afterlife in the Aeneid[4] is consonant with the Homeric view as well as that of Plato, and he makes it clear that everyone faces judgment.

The mystery religions of the Hellenistic era offered initiates the hope of salvation through confession, judgment, and forgiveness, as well as ritual purity. The Isaic mysteries were influenced by the traditional religion of ancient Egypt, which had symbolized the judgment of the soul through its weight on the scale of truth.[5] Orphic initiates were buried with devotional texts that provided instructions for navigating the hazards of the underworld and addressing the judges; the soul who speaks correctly will be given a drink from the pool of Memory before joining the heroes who have gone before.[6]